While it’s nearly unfathomable for us as avid hunters to understand the anti-hunting mindset, it’s enough that we know there are those organizations out there working diligently every day to try to end our way of life. To them, hunting is evil, hunters are evil and anything associated with the sport needs to end—and the sooner, the better.

Many of these groups go about their business somewhat stealthily, not making a big fuss lest they get hunters interested in fighting back. Consequently, they use targeted communications to their members and others they think they can turn to their way of thinking in an attempt to garner support for ending all hunting.

Let’s take a look at 10 such organizations that are worthy of keeping an eye on as we hunters work to promote cultural acceptance of hunters and legal, regulated hunting and secure the future of wildlife conservation.

1. Humane Society of the United States (HSUS)
This group is disingenuous even in its name, which it uses to trick unknowing donors into giving it money, thinking they are contributing to local humane societies, which often work to rehome stray animals. This NRA Hunters’ Leadership Forum website has been shedding light on this particular HSUS lie for years. As one NRAHLF.org article explains, “the HSUS is an activist, anti-hunting, animal-rights shell of a nonprofit that masquerades as a group running, or at least primarily funding, animal shelters. The HSUS has long raked in donations, some of which are used for campaigns to close hunting seasons, by fooling well-intentioned people into giving it money. Uninformed people assume HSUS will use its donations to neuter, shelter or otherwise help all the sad-eyed cats and dogs HSUS puts in its ads.” 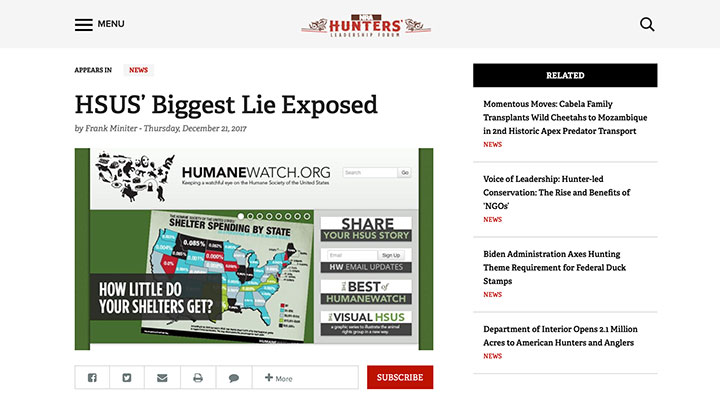 In a recent attempt to discredit hunters through an attack on the Dallas Safari Club, Flocken, president of Humane Society International, the HSUS’ global arm, wrote, “Science has shown that trophy hunting has caused the decline of wildlife populations including those of African lions, leopards and elephants.”

Have no doubt: If the folks at HSUS could have one wish, they’d wish to end all hunting.

2. People for the Ethical Treatment of Animals (PETA)
Like the HSUS, PETA is one of the most well-known extremist groups, as well as one of the most devout in its attempts to end all hunting. In fact, we recently told you about one of the group’s latest attempts to equate animals and humans, a common tactic among anti-hunters even though hunting isn’t even mentioned in that particular communication. 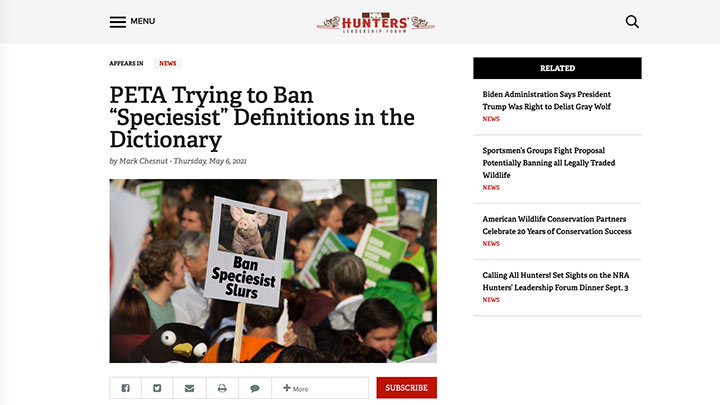 “Many popular dictionaries—including Merriam-Webster, the Collins English Dictionary, the Oxford English Dictionary, Dictionary.com and WordReference.com—include speciesist slurs in their definitions of ‘dog,’ ‘pig,’ ‘rat’ and ‘snake,’ and they need to remove them or label them as such,” the group wrote in a recent action alert. “Definitions like these fuel speciesism—a belief that humans are superior to all other animals.”

Of course, once everyone considers humans no longer “superior to other animals,” hunting any species could be equated to murdering another human being. But the “Big Two” aren’t the only groups dead set on outlawing hunting. Here are eight more that also have it out for us.

3. Friends of Animals (FoA)
Friends of Animals is an international organization that claims to be working “to free animals around the world from cruelty and institutionalized exploitations.” And while it does participate in such activities, it also has hunters in its crosshairs.

“We oppose hunting,” the group states bluntly on its website’s “About Us” section. “FoA was one of the first international advocacy organizations to challenge the long-held belief that regulated hunting can be a valuable conservation tool for endangered animals. We educate the public that killing is not conservation—protection of habitat and reintroduction of threatened and endangered species is.”

The group is also working to stop legal, regulated safari hunting in Africa—an activity that pays for the bulk of wildlife conservation in numerous African countries. In addition, it openly works to end the importation into the U.S. of legally hunted wildlife, including Africa’s Big Five and other species.

4. American Society for Prevention of Cruelty to Animals (ASPCA)
The ASPCA has been around longer than many NRAHLF.org readers, and it is just as vehemently opposed to legal, regulated hunting as it has ever been. While the group claims to advocate for imperiled animals, it freely admits on its website that it wants to stop all hunting, even for sustenance. “The ASPCA is opposed to hunting animals for sport, even if the animals killed in this way are subsequently consumed,” the group says on its website’s “Hunting” page.

5. Defenders of Wildlife
This non-profit conservation organization claims to work to protect all native animals and plants throughout North America in their natural communities. But guess what: There’s a really big difference between protectionism and conservation.

While Defenders of Wildlife says it advocates for imperiled species, much of its work and litigation involves trying to stop hunts of animals that are not endangered or threatened while being vocal in its criticism of wildlife agencies that work to maintain healthy wildlife populations through legal, regulated hunting. Most recently noted are its attempts to derail the delisting of gray wolves from the Endangered Species Act (ESA) in the Lower 48. As reported by NRAHLF.org, the National Rifle Association and Safari Club International filed to intervene in three legal cases against the U.S. Fish and Wildlife Service's (USFWS) decision to delist long-since-recovered gray wolves. One of the three suits was filed specifically by Defenders of Wildlife, the Center for Biological Diversity, Sierra Club, National Parks Conservation Association, Oregon Wild and the Humane Society of the United States. 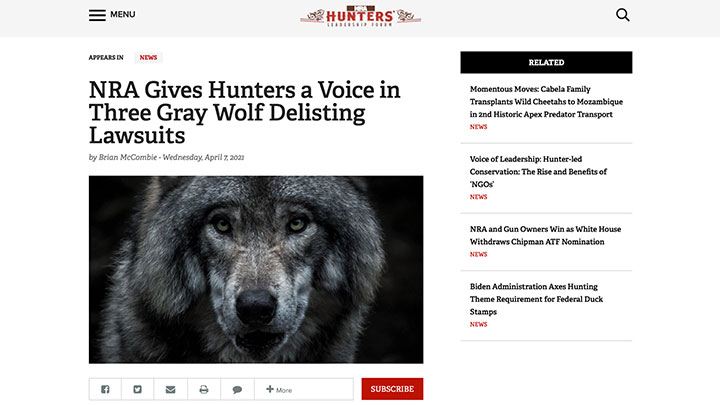 As reported by the NRA Institute for Legislative Action (NRA-ILA), with growing and sustainable populations, the gray wolf delisting under the Trump administration was not only appropriate, but it remains a testament to the significant and successful conservation efforts of federal and state wildlife agencies to increase wolf numbers.

“Hunting may have played an important role, next to plant gathering and scavenging, for human survival in prehistoric times, but the vast majority of modern hunters in developed countries stalk and kill animals for recreation,” the website says. “Hunting is a violent and cowardly form of outdoor entertainment that kills hundreds of millions of animals every year, many of whom are wounded and die a slow and painful death.”

Of course, the organization has just the cure for such “murderous business”—a hefty donation from its ultra-left followers. A handy “Donate” tab is provided so IDA’s brainwashed members can spend their hard-earned dollars to try and end the way of life that we so enjoy.

7. Center for Biological Diversity (CBD)
The Center for Biological Diversity fights against regulated sport hunting at nearly every opportunity. The organization is currently in the forefront of a push for a new federal regulation that could basically end the transport of harvested gameboth domestically and internationally. While purported to be about live animals that could carry disease, the proposed rule would include a complete ban on interstate transport of meat, hide, horns, antlers and skulls of harvested animals.

Just last year, the organization was involved in an effort to put an end to the incredible success story of the North American Model of Wildlife Conservation by ending its reliance on sportsmen as wildlife management’s top funding source. Currently the bulk of wildlife management in the country is funded in large part by license fees and federal taxes on sporting equipment. A change in that could be devastating to wildlife populations throughout the country. As mentioned earlier, CBD also is involved with Defenders of Wildlife and other groups that have filed lawsuits to relist long-since-recovered gray wolves under the ESA.

Among other things, the Sierra Club is in the forefront of the fight to keep gray wolves under the protection of the ESA. Even President Biden knows that’s not a good idea, as his administration recently asked the judge presiding over a case dealing with relisting wolves in the United States District Court for the Northern District of California to reject the lawsuit.

Additionally, the organization uses the guise of protecting public lands and national parks to champion the “conservation” of hunted species such as marmots, bison and wolves. While supporting large set-asides of land under wilderness designations, it does not consider hunter access to these lands, as wilderness designations prohibit all improvements, such as roads or trails.

9. WildEarth Guardians
WildEarth Guardians is another anti-hunting organization that has argued gray wolves should remain under ESA protections, even though populations have recovered to the point that the species no longer meets criteria as set forth in the federal law. As with most anti-hunting groups, its position is based more on feelings than science.

As this website has reported, other efforts the group has been involved in include suing the federal government to end bear baiting in two states and, under the guise of stopping logging and cattle grazing, working to close public roads on public lands—U.S. Forest Service and Bureau of Land Management parcels—thus barring access to hunters.

In a direct assault on hunting and in contradiction to state fish and wildlife agencies’ authority to determine the best methods to humanely hunt and trap, the group professes: “We confront this persecution of wildlife directly.”

10. Natural Resources Defense Council
The National Resources Defense Council is also in the thick of anti-hunting matters, acting as one of the plaintiffs in the aforementioned attempt to eliminate transporting harvested wild game animals across state lines. The group was also involved in an effort to get the giraffe listed as an endangered species, pushing to end hunting of the animals and doing away with the bulk of the money hunters provide for conservation of the species.

In the past, the organization has even worked to put an end to Washington and Oregon wildlife agency orders to thin wolf packs that are inflicting damage on cattle ranchers in those states. In its opinion, allowing ranchers to lose thousands of dollars in losses is more palatable than thinning a small percentage of the wolves to limit the depredation. And, of course, the organization is deeply involved in trying to return gray wolves to the endangered species list.