A Hunter’s Horn for Katie

Robert Ruark said in the Horn of the Hunter that “the hunter’s horn sounds early for some, later for others.” As a fellow Tar Heel who grew up hunting and fishing in the “Old Man’s Country,” I had always admired Ruark’s ability to put into words what I felt about hunting and its inherent wisdom. Little did I realize how this quote would resonate throughout my family.

Most of my children heard the horn of the hunter early and were avid hunters and fishermen before they reached age 10. However, my oldest daughter, Katie, never heard the horn’s music the same way. Though a gifted naturalist who had great field observation skills and even read field guides as childhood bedtime stories, she never had the urge to do more than sit with me in a ground blind. She loved to scout and was great at spotting deer, turkeys and doves but never had any interest in hunting herself. I often thought that if Katie ever became interested, she would become quite a talented hunter.

Eventually Katie went to college and spent some time as a vegan. Last summer, while in theory still a vegetarian, Katie surprised me when she asked if she could hunt deer in the fall. I was astonished to think she might be hearing the hunter’s horn. I explained that she first would need to pass a hunter safety course, learn to shoot, sit still and be quiet, and understand the basics of deer anatomy and the rules of deer camp. Among those camp rules was the one explained how hunting camp was not the place for arguing about politics, religion or COVID-19 vaccinations. If someone said something that another hunter didn’t agree with, the choice was to nod your head in contemplation or say nothing.

For the next several months, we went to the range every weekend to shoot a .22 rifle. When I realized she was serious about deer hunting, I started thinking about her hunting rifle options. I remembered my grandfather’s old .25-06 Remington Model 700 that had been passed to my uncle, then my dad and finally to me. It seemed to be a great way to make a connection with Katie’s great-grandfather and to the other hunters who had come before us. We even found my dad’s old Remington Core-Lokt ammo that still had a Kmart price sticker on it. We took it and the rifle to the range and both Katie and the rifle shot well. We also practiced sitting and shooting the way we would shoot from a blind.  The “horn of the hunter” was getting louder. 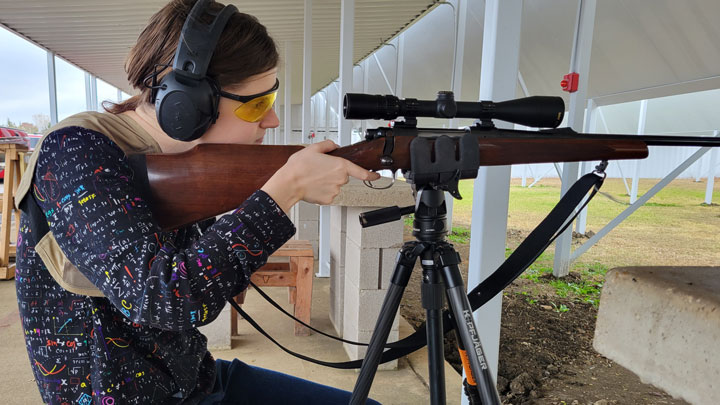 Finally, the big day came. Katie and I arrived in deer camp and got into the blind early that afternoon with the hope of getting a doe. Suddenly, four deer appeared like ghosts out of the brush. Once we realized they were all does, Katie started figuring out which one she wanted to shoot. Without warning, the biggest doe stood up on her hind legs and began slashing the smaller does with her front feet. We decided this was the target doe, but it was bunched with the others. I could feel Katie trembling as she quietly got into position and waited for a clear shot. As she and I had discussed, the deer needed to be standing still, broadside and by itself. Finally, Katie whispered, “Is this a good shot?” When I nodded, she took aim and fired. The doe spun and ran off. Neither of us were sure of what happened.

We waited in the blind until a good 30 minutes passed, then we walked to where the doe had been standing. When we got about 10 feet away, Katie said, “I see blood.” It was a tiny droplet that I would have struggled to see unless I were kneeling on the ground. Katie was always great at seeing small details, I thought, as she walked swiftly along a blood trail. Suddenly, she cried out, “Here she is!” and our celebration of her entry into the hunting world began.

Since that hunt Katie has killed two turkeys and has asked about going deer hunting again this fall. The former vegetarian’s favorite meal is now venison meatballs. Just a few weeks ago, Katie also asked her friend’s father if she could hunt the hogs on his land.

The horn of the hunter is singing loudly to Miss Katie.