The NRA applauds the efforts of the U.S. Senate and House of Representatives for including support to battle chronic wasting disease (CWD) in the recently passed federal spending bill called the Consolidated Appropriations Act, 2023. This legislation included language from the CWD Research and Management Act that was passed by the House in December 2021, but held up in the Senate for a year. As mentioned by the NRA Hunters’ Leadership Forum website in May 2022, this important CWD funding will provide $70 million annually through fiscal year 2028, split evenly for research and management of this disease. This will assist the state, federal and tribal agencies in learning more about the spread of this disease and to develop effective management strategies.

The CWD Research and Management Act received overwhelming bipartisan support when it passed in the House with a vote of 393-33 in December 2021, less than two months after being introduced. The NRA joined in support of this legislation with fellow members of American Wildlife Conservation Partners, a coalition of more than 50 like-minded conservation organizations that actively campaign on behalf of wildlife, their habitat and our hunting heritage.

CWD is a serious concern for members of the deer family (called cervids) because it is a 100 percent fatal disease with no cure or vaccines available. It is not caused by a virus or bacteria, but rather misfolded proteins called “prions” that cause other nearby proteins to also twist into an unnatural shape. These rogue prions multiply until they seriously affect the animal’s central nervous system. Unfortunately, it is difficult to identify an infected animal until it is too late because most deer look healthy until nearly the end. In fact, infected animals often walk around shedding the infectious material in the environment, and infecting others directly, before appearing sick from the disease. Regardless, deer only live about two years after becoming infected.

To date, CWD has been found in wild or captive herds in 30 states and five Canadian provinces in North America and in Finland, Norway, Sweden and South Korea. The rate of spread in North America has accelerated recently with five new states and provinces detecting it in the last 15 months. Throughout the United States, the disease continues to spread and the percent of the population that is infected (called prevalence) now exceeds 40 percent in some deer herds. Research and management experience by agencies and academic institutions have shown that when the prevalence level exceeds about 30 percent, it can start to cause herds to decline in abundance. Any new source of mortality adds to the existing amount of mortality in the population. Not only does this disease remove additional deer from the population, but it can make otherwise healthy deer more susceptible to all other forms of mortality like predation, hunting and vehicle collisions. Unfortunately, it’s now clear that not only are bucks infected more than does, mature bucks have the highest rate of infection. 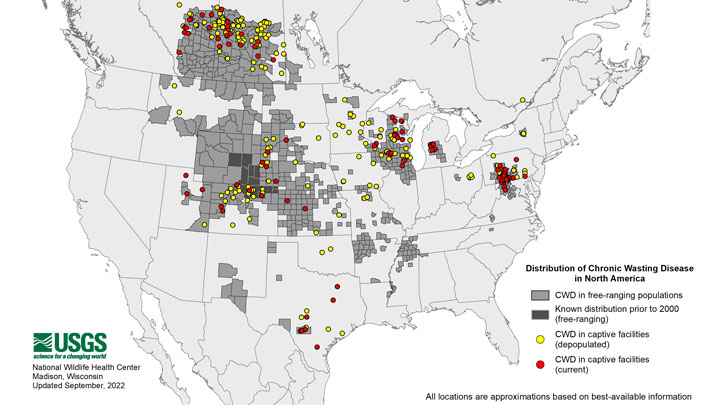 CWD has never been found to infect humans, but public health officials recommend we avoid consuming infected animals as they continue to research the disease. In some areas, people have been eating CWD-positive deer for 40 years, so consumption of CWD positive animals is a personal choice. Regardless, one could imagine the terrible impact it would have on conservation and our hunting heritage if a connection were to be discovered between venison consumption and human health. This is a disease that we must take seriously for the sake of our herds and the future of hunting.

Researchers from state, federal and academic institutions and agencies are expending a lot of effort to learn more about this disease to find a way to control the spread and prevalence in the population. Through collaboration and sharing at conferences and in scientific publications, researchers have fostered a community of learning where everyone benefits from the latest findings. The overall benefit of this new funding can be maximized by the existing infrastructure and cooperation already in place to put the funds to efficient use. Eradication of the disease is not likely with the tools available today, but research will focus on transmission pathways, improved detection (especially on live animals), long-term suppression and genetic resistance to allow agencies to make science-based decisions about how best to manage CWD on the ground in captive and wild herds. 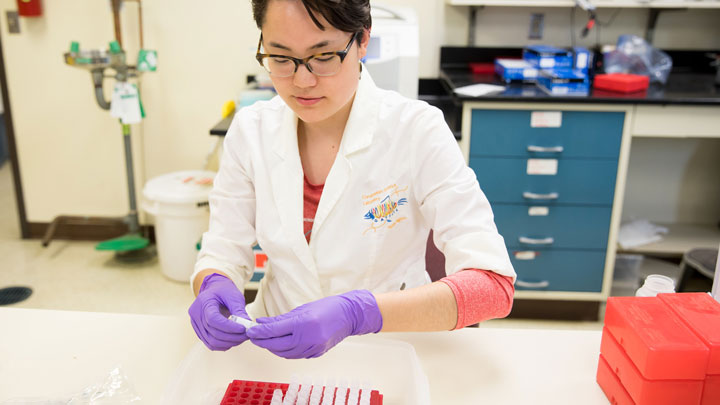 This disease is not only crippling to the animals who contract it, but it’s also crippling to state and tribal agencies trying to monitor the disease and implement management actions to slow the spread and keep prevalence low. The management portion of this funding source is critical to help agencies minimize the use of existing conservation dollars to study and battle this disease.

“This combination of funding research to learn more about the disease, coupled with money for state and tribal wildlife agencies to manage it on the ground, is exactly what we need to address this growing threat to North American cervids,” said Dr. Anne Justice-Allen, who chairs the Wildlife Health Committee of the Western Association Fish and Wildlife Agencies.

Funding will prioritize states or tribal lands where prevalence is highest, but also will provide funding for new detections because more management options exist when the disease is discovered in its early stages. Management experience tells us we may have a chance to control CWD if we catch it while prevalence is still below 5 percent of the population. These funds also include support for developing educational materials to provide a consistent and fact-based message to the public about this disease.

Collaboration among top disease researchers throughout the range of CWD, and management experience gained on the ground by state and tribal agencies, now will receive the funding and support needed to fight against this threat to our most iconic big game animals.

About the Author
A wildlife biologist with degrees from the University of Wisconsin-Stevens Point and Texas A&M University-Kingsville, Jim Heffelfinger has worked for state and federal wildlife agencies and universities and in the private sector. He is the author of Deer of the Southwest and the author or coauthor of more than 200 magazine articles, 50 scientific papers, 20 book chapters and numerous outdoor TV scripts. Chairman of the Western Association of Fish and Wildlife Agencies’ Mule Deer Working Group representing 24 Western states and Canadian provinces, he also is the recipient of the Wallmo Award, presented to the leading mule deer biologist in North America, and was named the Mule Deer Foundation’s 2009 Professional of the Year. A member of the International Defensive Pistol Association and the U.S. Practical Shooting Association, Heffelfinger enjoys weekly competitions with his 1911. The opinions expressed here are his own and reflect his personal point of view.