Now documented in 28 states, chronic wasting disease (CWD) could be the greatest threat to hunting and to the health of deer, elk and moose populations continentwide. Those working to address the crisis head-on got a major boost Tuesday when the NRA and 30 other hunter-backed groups that are part of the 50-plus member coalition known as American Wildlife Conservation Partners (AWCP) signed onto a letter to Sen. Debbie Stabenow (D-Mich.), chairwoman of the U.S. Senate Committee on Agriculture, Nutrition & Forestry, and committee ranking member Sen. John Boozman (R-Ark.), urging the Senate to pass H.R. 5608—the Chronic Wasting Disease Research and Management Act—at as soon as possible during this session.

Passed by the House in December on a 393-33 floor vote confirming widespread bipartisan support, H.R. 5608 aims to fund CWD research and support state and tribal agencies’ efforts to manage and combat the always fatal disease impacting deer, elk, and moose populations. The bill authorizes $70 million in annual funding from Fiscal Year 2022 to Fiscal Year 2028. It will direct the first $35 million annually toward CWD research to help enhance CWD detection methods and study genetic resistance. The remaining $35 million will provide essential resources to wildlife managers nationwide to help manage the disease.

“There are presently no treatments or vaccines available to treat animals infected with CWD, and research has already shown that both white-tailed and mule deer are experiencing negative population effects as a result,” the AWCP letter notes. “The lack of resources and comprehensive funding is leading to rising costs to agencies as they struggle to address the spread of the disease. Additionally, the resources that state and Tribal fish and wildlife agencies direct toward CWD are most often being diverted from other conservation efforts.”

“CWD is a huge problem and the only way to solve it is through additional research,” said Erica Tergeson, Senior Advisor, NRA-ILA. “This bill, if funded, will take us one step closer to a solution.”

According to the AWCP letter, H.R. 5608 is the result of a partnership between several U.S. congressmen who merged bills introduced in both chambers of the 116th Congress. Those bills worked to combine Federal support with ongoing efforts of states and tribes to address CWD research and management. H.R. 5608 also is in step with Sen. Barrasso’s bill on CWD from the last Congress that was enacted in the America’s Conservation Enhancement Act. According to the AWCP, that measure established a federal Chronic Wasting Disease Task Force supported by research into how CWD is transmitted. 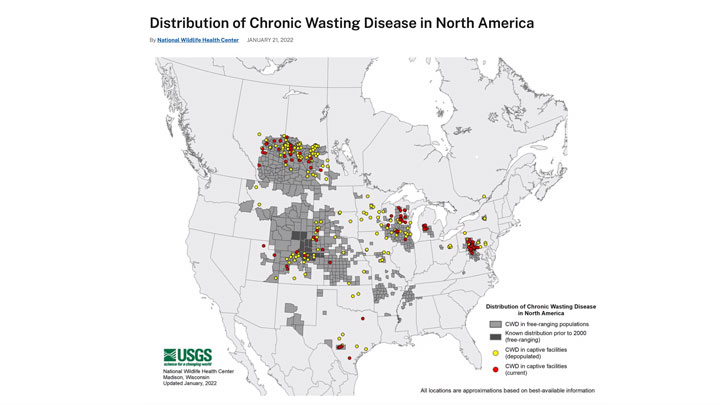 “We thank you for the Senate’s leadership on these two important aspects of the national CWD response,” the letter states, “and urge you to now ensure states and tribes have access to effectively engage on this issue and with the federal task force.” It goes on to explain, “There are presently no treatments or vaccines available to treat animals infected with CWD, and research has already shown that both white-tailed and mule deer are experiencing negative population effects as a result. The lack of resources and comprehensive funding is leading to rising costs to agencies as they struggle to address the spread of the disease. Additionally, the resources that state and Tribal fish and wildlife agencies direct towards CWD are most often being diverted from other conservation efforts.”

If not addressed, CWD’s prevalence ultimately will diminish participation in hunting, which will only increase funding concerns. As the AWCP letter notes, “Through the ‘user pays-public benefits’ American System of Conservation Funding, hunting provides critical funding for wildlife management through license sales and excise taxes on hunting equipment. Ungulate hunting is also a major contributor to the U.S. economy. According to the 2016 National Survey of Fishing, Hunting, and Wildlife-Associated Recreation, big game like elk and deer attracted 9.2 million hunters—80 percent of all hunters—who spent 133 million days afield. Overall, hunters in the U.S. spent $25.6 billion on trips, equipment, licenses and other items to support their hunting activities in 2016, much of it the result of big-game hunting.”

The threats that CWD poses to wildlife, hunting and conservation are serious and warrant a coordinated national response. The AWCP letter concludes, “We estimate that the 28 states where CWD has been detected currently spend $50 million per year collectively. The Chronic Wasting Disease Research and Management Act (H.R. 5608) authorizes the needed resources, up to $70 million for state wildlife agencies, Tribes, and other partners, split equally between the essential tasks of research and management. Thank you for your attention to this pressing need.”

Those who care about wildlife owe a big thank-you to the 31 AWCP groups that are actively supporting H.R. 5608. They represent the interests of millions of hunter-conservationists, professional wildlife and natural resource managers, outdoor recreationists, conservation educators and wildlife biologists. As this NRA website noted in promoting the coalition’s 20th anniversary in August, “the AWCP is a conservation powerhouse united in protecting the future of our renewable wildlife resources.”

About the Author
Outdoor writer, TV host and farm/ranch real estate associate broker Phil Phillips has hunted five continents, taking nearly 60 species worldwide. Prior to hosting hunting programs, he started Colorado's first Ranching for Wildlife Program for antelope. Working alongside professional land managers, he went on to guide clients to 500-plus big-game animals and was named Safari Club International’s (SCI) North American Bowhunting Outfitter of the Year. A Life member of hunter-backed organizations including the NRA, Dallas Safari Club, Mule Deer Foundation and Safari Club International, he can be reached at [email protected]