Say It Ain't So, Luke: 'Star Wars'' Mark Hamill Attacks Second Amendment With Snarky 'Right to Own a Musket' Tweet

Hollywood throwing around anti-gun and anti-hunting rhetoric is nothing new—which we highlighted earlier this month following Miley Cyrus' Instagram tirade—but sometimes the musings of these often woefully misled "personalities" have to be called out for their sheer ignorance. The most recent offender is legendary "Star Wars" actor Mark Hamill—Luke Skywalker himself. As originally reported by OutdoorHub, Hamill fired off a handful of anti-gun Tweets earlier this week, which drew an array of responses from his 970,000 followers.

Hamill had recently received a supportive "Thanks for speaking out!" Tweet from the account of Michael Bloomberg's Everytown for Gun Safety organization. Hamill's response was a snark-laden "Don't get me wrong, as a strong supporter of the 2nd Ammendment-I believe in every American's right to own a musket."

Spelling mistake of the word Amendment aside, Hamill's response fell back on the oft-repeated and impossibly misguided anti-gunner argument that the Founding Fathers authored the Second Amendment in a vacuum that must be re-evaluated for modern times. As many of our readers know, the Second Amendment makes no mention of muskets. It reads: "A well regulated Militia, being necessary to the security of a free State, the right of the people to keep and bear Arms, shall not be infringed."

When confronted with these facts by some of his more firearm-friendly followers, Hamill doubled down on his original assessment and corrected his spelling.

His stance is disappointing, but not unprecedented. A 2015 Tweet he authored argued that Australia "fixed" it "after Port Arthur '96," which implies he supports the restrictive National Firearms Agreement that Australia passed in 1996—which famously included mass confiscations.

As a whole, Hamill declined to address the Twitter users who continue to pepper him with pro-gun arguments. He did, however, retweet a follower who shared a post that unabashedly attacks the son of Donald Trump, Donald Jr., for taking a trophy photo with an elephant he harvested in 2012. The Tweet appears to imply that violence is in store for Donald Jr. in another life. 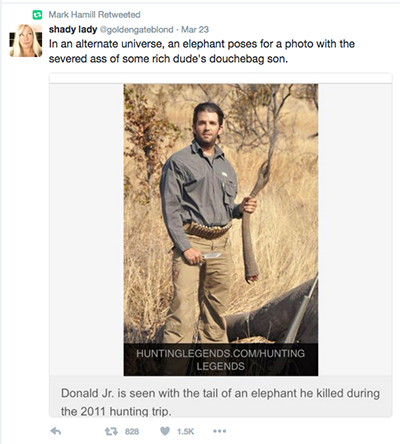 So, Luke Skywalker: Anti-gun and anti-hunting. Got it.