So do hunters really conserve wildlife?

For decades that question has been at the core of the clash between anti-hunting groups and conservation organizations that promote hunting, and was put forth in a debate on Wed., May 4, 2016. Field & Stream Editor Anthony Licata and Catherine Semcer of H.O.P.E. (Humanitarian Operations Protecting Elephants) argued for the motion; Wayne Pacelle, president of the Humane Society of the United States, and Adam Roberts, head of Born Free USA, argued against it. The debate was hosted by Intelligence Squared (IQ2) at Manhattan's Kaufmann Center and moderated by John Donovan of "ABC News."

So when the dust settled, which side won? The answer is … drum roll, please … It still depends on which side you ask. You can read the debate transcript in its entirety here.

But results of pre- and post-debate polls of the live audience show that Pacelle and Roberts were able to use their well-rehearsed and expertly delivered emotional arguments to “convince” an already biased audience to vote that hunting is not really conservation.

Although a bit discouraging, the outcome is not surprising considering that the debate took place in New York City—a locale not exactly famous for its contingency of hunters. It is important to note that a pre-event online "Hunters Conserve Wildlife" poll showed a 69-percent approval of hunting as a means of conservation, a poll that drew such vicious verbal threats from the anti-hunting contingency that the Kaufmann Center was compelled to increase its security force prior to the event. Conveniently, these online poll results were omitted from any final reporting as Donovan later cited them as being “unscientific.”

Audience members in attendance were provided with electronic voting systems at their seats as a way of voting for or against the motion.

While Licata and Semcer artfully presented indisputable facts and statistics supporting that hunting is the most powerful means of conserving animal species, particularly those that are endangered, Pacelle relied on examples of animal rights extremism as a basis for his arguments as he lashed out at conservation groups including the NRA and SCI. Perhaps his biggest jab at hunters was when he actually said conservation has nothing to do with why hunters go into the woods. "Hunting is going to be around for a while," he says. "There's a deeply committed, small segment of the American population that favors it, but let's not make the argument, because it's untrue, that somehow this [hunting] is a big protector of wildlife in general." As for Africa, he says, "The trophy hunting concessions are miniscule compared to wildlife watching, which is why Botswana and Kenya and Rwanda have banned all trophy hunting." Even Roberts had to give the facts a slight nod when he said, "Well, I think it's very effective if you look at it in a very small microcosm." But then was back at it and said hunters only work to rebuild species' populations just to hunt them back to the verge of extinction.

Pacelle and Roberts regularly relied on highly charged and widely publicized controversies such as 2015’s “Cecil the Lion” to get the audience to focus on one animal rather than on the general health of a species' population. Licata and Semcer repeatedly called them out for being disingenuous and for purposely obfuscating the facts to tap into audience emotions and compel them into believing poaching is hunting and that market hunters are sportsmen. At one point when a man in the front row said he knew Cecil and that "there were 13 other lions killed illegally that were wearing collars in Hwange National Park," even Donovan stepped in, responding, "But this team is not arguing for the illegal killing of animals." Thank you, Mr. Donovan. That that would be poaching.

Countering Roberts' false statements on the decline in lion populations, Semcer, whose organization H.O.P.E. works with governments and organizations to fight poaching in Africa, said, "We are the people who hunt legally. We pay into the system. We purchase licenses. We do boots-on the-ground conservation projects. The cause of lion decline is not sportsmen, and you know this. The cause is herdsmen killing lions because they are competing with their livestock. That is in every single document, from the U.S. Fish and Wildlife Service to the IUCN," referring to the April 2016 IUCN (International Union for Conservation of Nature) Briefing Paper prepared for the European Union advising it to ensure decisions restricting or ending trophy hunting are based on an analysis of trophy hunting's role in affected communities and are made only if other alternatives can deliver equal or greater conservation incentives.

Licata and Semcer touted proven facts and research provided from agencies such as the U.S Fish and Wildlife Service and from African agencies that acknowledge the billions of dollars hunters raise for conservation. Some of them include:

• Since 1965, hunting license fees have generated $22 billion for conservation in their respective states. In 2015 alone, they generated $821 million.

• The Pittman-Robertson Act's excise tax on sales of ammunition set aside over $12 billion for state wildlife conservation, allowing species from deer to wolves to recover.

• The duck stamp has preserved six and a half million acres of wetlands.

• Hunters have conserved an area of wildlife habitat in Africa more than 1.7 times the size of the U.S. National Park System.

• Conservation does not come for free. We need tourism, too, but the reality in Africa is that it's not possible everywhere.

Despite all this, Pacelle said to instead examine our national parks. "Every U.S. national park with the exception of one forbids trophy hunting and forbids sport hunting entirely. So we're managing those populations through Mother Nature, who does it quite well and has done so for eons." Not true. Here are just two recent stories talking about how and why hunting is being used on some national parks.

Licata countered, "We don't live in one giant national park. Not everything has that intact ecosystem. The fact is, there are a lot of people in this world. The habitat won't support predators. It cannot just be left to its own. Hunters are a natural part of that ecosystem and always have been. And when it's done in the right way, it's absolutely effective and valid."

In the end, this particular debate on whether hunters help or hurt conservation was decided by a court of public opinion—a public that was pre-disposed to delivering the unfavorable outcome.

However, what came out of this was an opportunity for hunters—and future hunters and potential hunters—to analyze the deceptive and emotion-based tactics set forth by those who wish to end all hunting as a means of conservation. Please share this article with fellow hunters and be advised: Pacelle's and Roberts' obfuscating debate styles showcased the tactics the anti's are using to sway an undecided public to their side. That is why it is more important than ever that hunters arm themselves with facts to be prepared to counter anti-hunting extremism.

There is more to come at nrahlf.org on this debate. In the meantime, the moral of the story is to tell our story. And as Licata said, wildlife populations across America are up, thanks to hunters, but that's because we work at it every day. 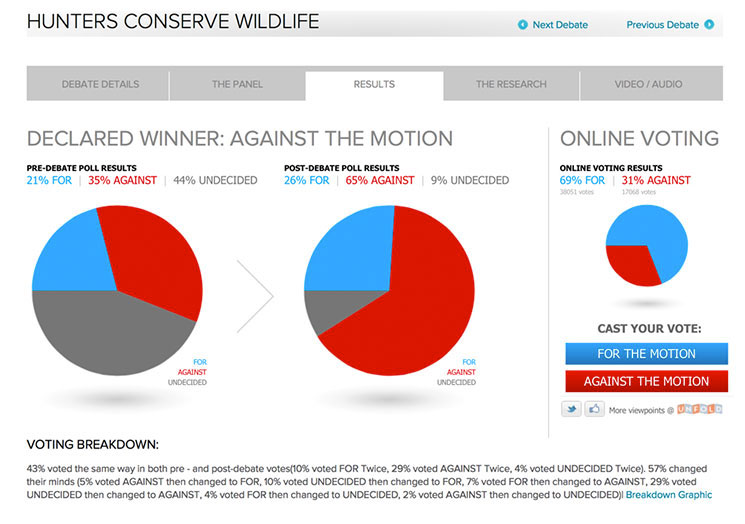