Anti-Hunters Are Attacking Farmers, Too

As the Director of Conservation at Bass Pro Shops, I was asked to address attendees of the Dairy Summit in August. With animal rights extremist groups in the 21st century working to exterminate all hunting, it is clear their overall goal is to create a meatless society. As reported last June, did you hear just how close the Humane Society of the United States (HSUS) got to having its "Meatless Mondays" agenda put in place in all U.S. military cafeterias? The measure got as far as the fiscal 2017 Defense Department appropriations bill in the U.S. House before being struck down. Clearly, our groups share a common enemy. My talk, therefore, focused on what the agricultural community can learn from the sportsmen’s community to increase its effectiveness in fighting back.

I felt at home addressing this crowd, having grown up near a small town just over the hill from the place where my dad grew up milking cows on the family farm until he went off to serve in WWII. I talked of how I’d spent many a day walking over that hill with Dad and Grandpa, with a shotgun in hand, flushing ring-necked pheasants from corn and alfalfa fields and fence rows during the 1960s. As we hunters know, such formative days connect us with the land. In my case, they also connected me to the farm life and the wildlife that are so important to me. They gave me an understanding of nature’s cycle and of our natural and agricultural world—of where food comes from and what it takes to sustain life. They brought me closer to God and instilled an appreciation of the vast resources He has entrusted to us.

I explained it was only later in life that I understood that in our growing urban society, there are far more people who don’t have that experience. Today that lack of understanding creates problems in our society as it relates not just to hunting but to farming, ranching, fishing and the management of our shared lands with animal rights extremists going as far as seeking “personhood” status for animals. The way to go on offense is to work together.

From my perspective, farmers and other agricultural producers share some common ground with sportsmen. Without working lands, hunting, fishing and shooting would be decimated; most of the access to hunt, fish and shoot and the wildlife we pursue exists on farms and ranches. In addition, farmers and ranchers share the rural and patriotic values that sportsmen also hold dear—values that can be leveraged if we unite. While we sportsmen, for example, have limited resources relative to most interest groups, we are unified. Our shared passion creates instant bonds generating friendship and trust so we can look past any minor differences and support our shared goals. Groups like the NRA, through the NRA Institute for Legislative Action (ILA) and the NRA Hunters’ Leadership Forum, are vocal in helping to lead the charge. Backed by five million NRA members, such power and influence translates into everything from winning elections to protecting hunters’ and target shooters’ rights. And, of course, helping to prevent the HSUS from achieving any victory prevents a negative precedent and any damage to the hunting community as a whole.

As an example, I talked about the National Shooting Sports Foundation (NSSF), the firearms industry’s association, which regularly works with archery interests, anglers, trappers and others when they come under attack by radical animal rights organizations. Oftentimes the issues they engage in aren’t necessarily a top priority for gun and ammo manufacturers and retailers. However, they engage for the common good.

I shared that it is vital that sectors of the agricultural community never break ranks when addressing groups such as the HSUS and People for the Ethical Treatment of Animals (PETA). An attack on pork or chicken producers is an attack on dairy farmers whether or not it seems attenuated. Second, as covered on this website, organizations like HSUS and PETA exist to destroy agriculture in the same way they exist to destroy sportsmen. Making deals with these organizations that want to ban all meat only hurts those who decide to engage with them.

The strategy of the antis is this: Any animal use equals abuse. They want to end meat-eating and apply the same emotional anti-meat strategy to hunters as well as farmers and ranchers. But we can beat the enemy through our advocacy efforts by learning how to talk to the public through research-based communication strategies. Remember that it is not what you say but what people hear that matters.

Recruitment and Retention
Sportsmen regularly work to recruit new hunters, anglers and shooters, which helps to generate more sportsmen’s advocates. In recent years, the sportsmen’s community has begun to embrace technology to recruit and retain new hunters and anglers to build our ranks.

Patriotism
Like hunting and fishing, what is more patriotic than farming and ranching? Leveraging patriotism into our advocacy on behalf of protecting and expanding America’s outdoor and agricultural heritage means touting shared goals. The agricultural community must keep working lands working and intact and it must defend itself against the radical animal rights extremist organizations like the HSUS and PETA. Identify shared policy priorities such as incentives for creating wildlife habitat on private lands and ensuring that Title I and Title II of the Farm Bill are mutually beneficial. The sportsmen’s and agricultural communities must do everything we can to protect and defend our unique American values. 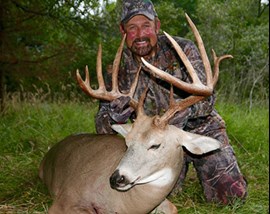 Most people in the wildlife conservation and hunting community know Rob Keck as the “turkey man.” Serving for nearly three decades as the CEO of the National Wild Turkey Federation (NWTF), Keck is a former U.S. Open and World Turkey Calling Champion, the first person to take a wild turkey in all 49 states that offer turkey hunting seasons—Alaska is the exception—and, over the past 20 years, has hosted three award-winning turkey hunting TV shows. But today he is a voice for hunters and hunting on an even broader scale as Director of Conservation for Bass Pro Shops. He is also a member of Bass Pro’s RedHead Pro Hunting Team, hosts Bass Pro Shops’ Outdoor World radio on SiriusXM’s Rural Radio channel and chairs the board of directors of the Wonders of Wildlife National Museum and Aquarium, which fittingly opened on Sept. 21: National Hunting and Fishing Day.

Tune in to Bass Pro Shops’ Outdoor World radio show Sat., Nov. 18!
Want to learn more about what the NRA is doing for hunters and hunting and why every hunter should be an NRA member? Tune in to Rob Keck’s Bass Pro Shops’ Outdoor World radio show interview with NRA senior editor Karen Mehall Phillips, on Sat., Nov. 18, at 10 a.m. and 5 p.m. EST on Rural Radio on SiriusXM (Channel 147). The NRA will be featured during the second half of the one-hour show.