*Pictured above: Grace and Chris Klineburger

Some people simply stand out in a crowd—even amongst 20,000 of our closest friends at the 46th annual SCI Hunters’ Convention at the Las Vegas Convention Center, Jan. 31-Feb. 3,–which is the case for Chris Klineburger, SCI’s 91-year-old living legend. This international hunting pioneer, author and World War II veteran is easy to spot because so much of the crowd is gathered around him!

Hunters across America and around the globe know Klineburger as the pioneer of hunting in Asia and Africa. Others recognize him as the author of two world-class hunting books: “Gamemasters of the World”—a 770-page autobiography chronicling decades of sport hunting and conservation—and “Conservation or Preservation,” an overview of the hunter’s critical role in wildlife management following the international outcry against hunting after the taking of a lion outside an African national park in 2015. Others know him from his epic 1960s hunting film, “The Great Shikar,” chronicling the expedition he and brother Bert made in the footsteps of adventurer Marco Polo as they searched for the Marco Polo sheep in Afghanistan’s Wakhan Corridor—an area dubbed “the roof of the world” for its foreboding environment. Still others know him as a wildlife conservationist in his home state of Nevada who works with state-based conservation groups while reaching out to non-hunters to explain the in the sustainability of wildlife and habitat conservation. As for how SCI knows him, he was of its original founders, who more than four decades later is still walking the SCI show floor, signing books, shaking hands and sharing hunting stories as SCI kicks off its annual four-day convention. 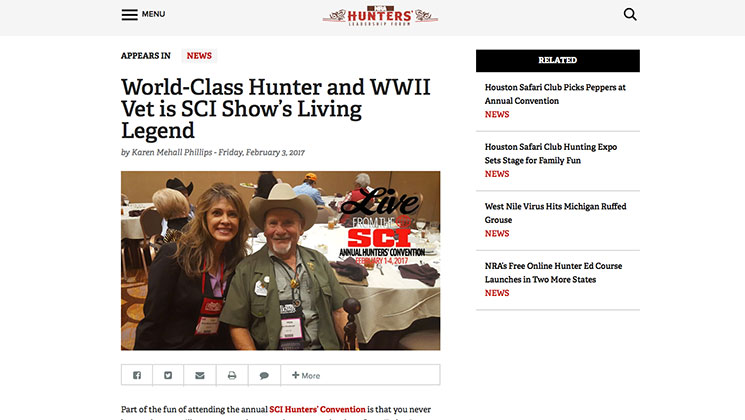 All things considered, few people have done more for American hunters and hunting than Chris Klineburger, including partnering with governments worldwide to open up hunting. For more fascinating information, click here to read the article I wrote on Chris after meeting him at last year’s show. Then track down this gracious man on the show floor and shake his hand. He will be with his lovely wife, Grace, who has been with him every step of the way. Ask Chris to share one of his exciting hunting stories from the last century and get set to become fascinated all over again.

Editor’s Note: NRA Publications wants to take a moment to remember Chris Klineburger’s brother Bert, who passed away on June 18, 2017. Alongside Chris, Bert worked to expand hunting worldwide and hunted countless game species himself, many of which are now out of reach to hunters. Bert guided everyone from presidents and kings to average all-American hunters and will always have a special place in the hearts of the collective worldwide hunting community.