Due to intense pressure from the National Rifle Association and hunters from around the nation, Facebook has done the right thing and pulled the fraudulent claims propagated on a pop-up Facebook page paid for by the North Dakota Democratic-NPL—which, incidentally, stands for Nonpartisan League Party, a political party founded in 1915 by the founder of the Socialist Party of America. 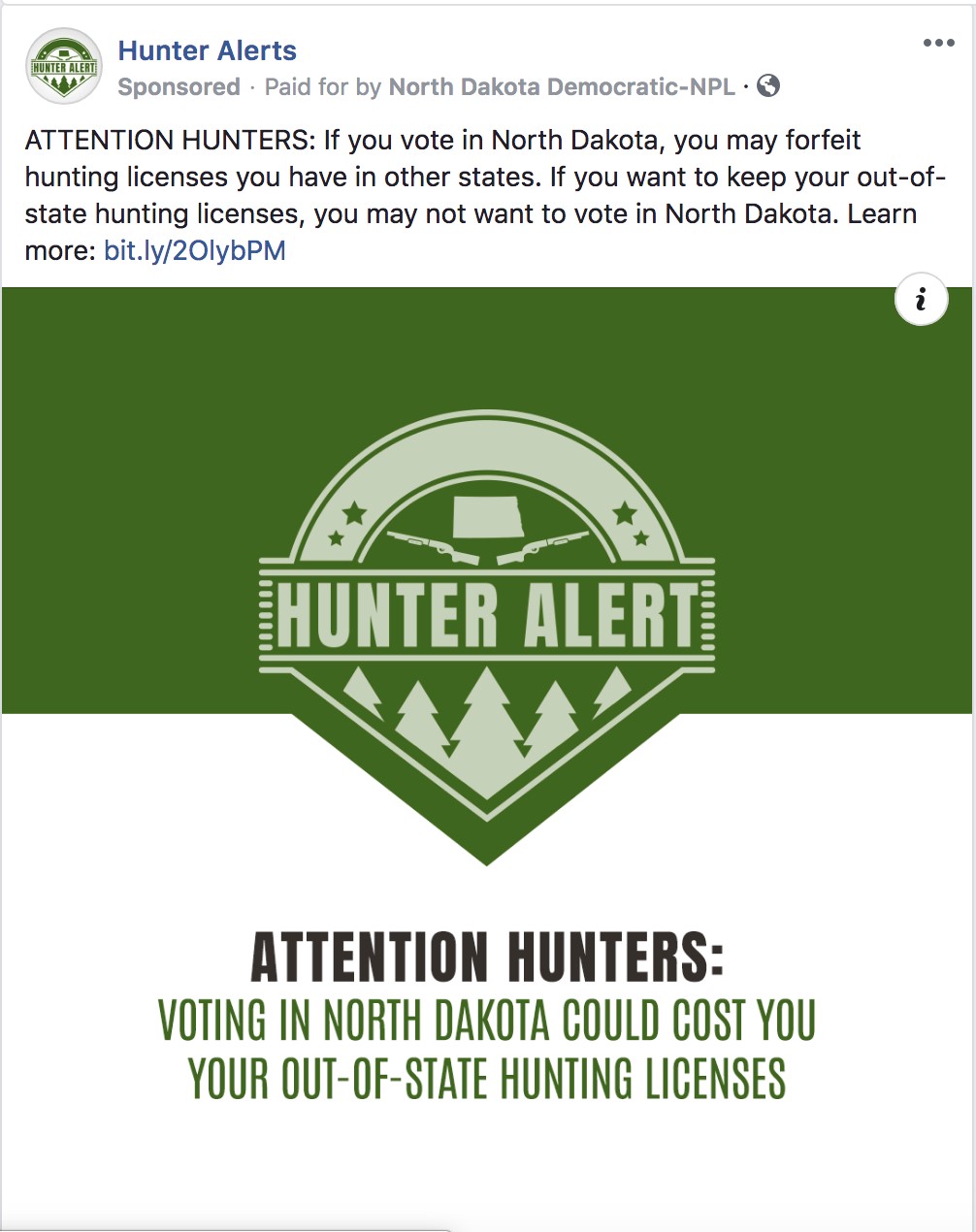 Facebook did the right thing and yanked the "Hunter Alerts" page, which was a front for the North Dakota Democratic NPL and its attempt to suppress hunter voter turnout.

The Facebook page named “Hunter Alerts” made the claim that hunters who vote in the Peace Garden State will lose their out-of-state hunting licenses if they vote in the 2018 midterm elections. The NRA’s lobbying arm, the NRA Institute for Legislative Action (NRA-ILA), leapt into action, Tweeting and posting on Facebook about this important issue while NRA-ILA public affairs appeared on statewide radio in North Dakota to push back on these outrageous claims. The claim was later debunked by the state’s licensing officials, including Randy Meissner, the licensing manager for the North Dakota Game and Fish Department. 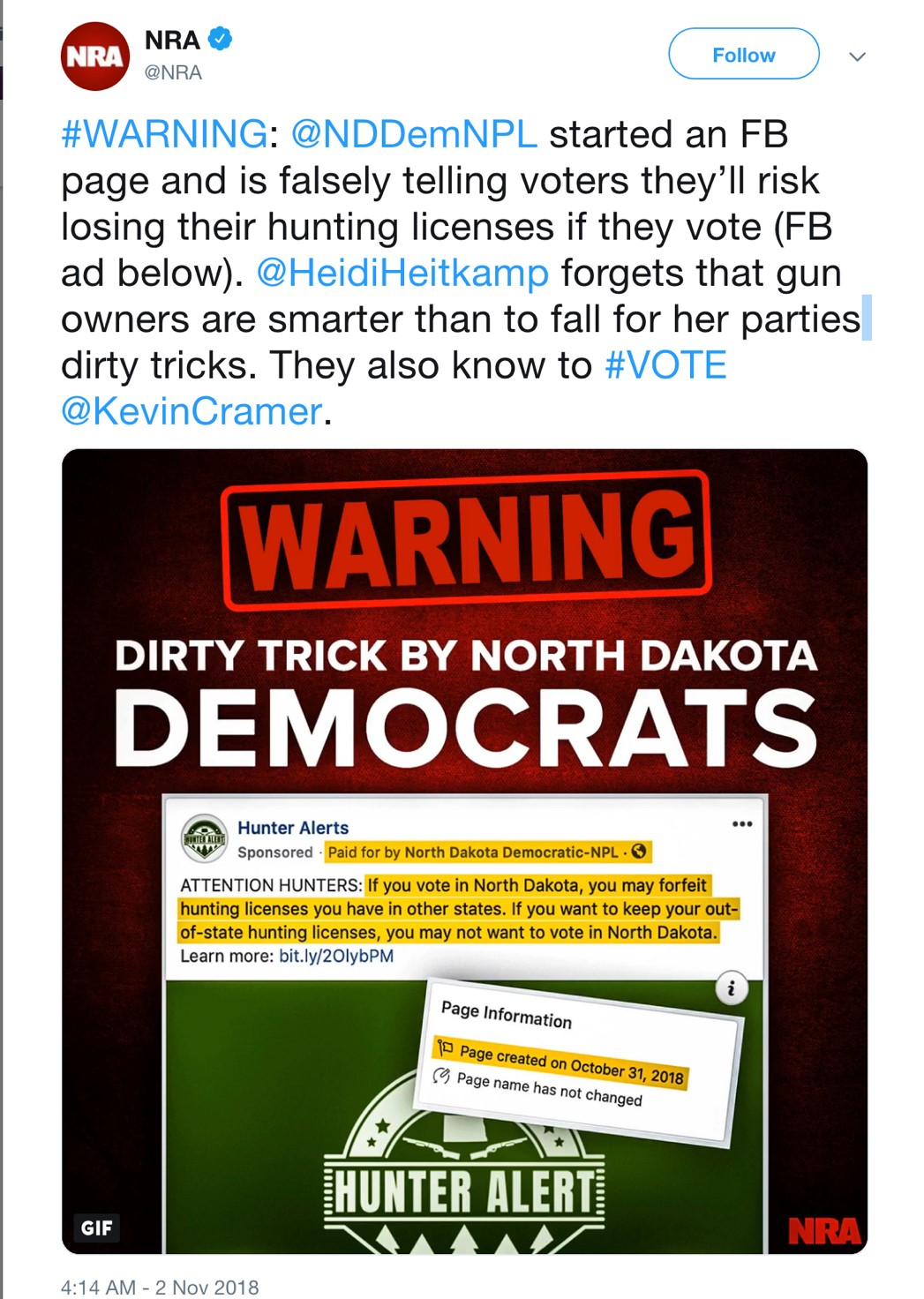 NRA-ILA and hunters mobilized immediately to put pressure on the social media giants to remove the fraudulent posts.

If you missed Saturday’s NRAHLF.org story and are just hearing about this issue, the dishonest Facebook Post read: “ATTENTION HUNTERS: If you vote in North Dakota, you may forfeit hunting licenses you have in other states. If you want to keep your out-of-state hunting licenses, you may not want to vote in North Dakota. Learn more:” and then directed hunters to a landing page to “learn more” information. Of course, the page had no additional information, merely pushing for the same call to action.

North Dakota’s Sen. Heidi Heitkamp—whose NRA-endorsed opponent Kevin Kramer holds a commanding 11-point lead in the polls—then doubled down on these outrageous lies and defended them as some sort of public service announcement. The notion was widely panned by media and pundits and the move was ridiculed nationwide as desperate and ill-advised.

As NRA-ILA Executive Director Chris Cox and this website regularly emphasize, mainstream American hunters and gun owners must remain vigilant to protect our all-American outdoor traditions. This latest example shows how far anti-hunting, animal rights extremists will go to suppress one of the most motivated voting bases in the country. Only by continuing to show up en masse to vote will we protect our way of life for generations to come.

About the Author: Cody McLaughlin is a noted conservationist and conservative thought leader on the public policy issues of hunting, fishing, gun rights, free-market tax and wage policy and the environment. He currently works as a GOP consultant for conservative political causes, managing clients’ digital communications and online presence and as a Trustee of the New Jersey Outdoor Alliance where he works to represent the state’s 1.2 million sportsmen and manage communications in the political arena.