As they say, a lot can happen in a year. In the case of U.S Secretary of The Interior (SOI) Ryan Zinke, truer words were never spoken as his one-year anniversary in office on Mar. 1 was a salute to our American hunting and conservation traditions.

But is it really so surprising? An avid hunter and angler, Secretary Zinke grew up enjoying and appreciating our all-American outdoor pursuits. He has acted on his values throughout his career, whether serving as a U.S Navy SEAL, a U.S. Congressman from Montana or as America’s SOI to do what is best for wildlife and our sporting heritage. Speaking as an NRA Life member, I’m proud to say no organization has praised Secretary Zinke more than the NRA and its five-million-plus members, starting with NRA-ILA Executive Director Chris Cox.

“On day one Secretary Zinke hit the ground running by lifting the last Administration’s ban on traditional ammunition—and he hasn’t slowed down since,” said Cox, who continues to applaud Zinke’s accomplishments. “He’s expanded hunting and fishing opportunities on federal lands, forged new efforts to encourage veteran hunting and fishing, and recently announced the Department’s prioritization of big game corridors to improve wildlife habitat.” In a nutshell, says Cox: “Secretary Zinke is fighting for us– America’s hunters– each and every day.”

Zinke's Banner First Day
As reported by NRAILA.org and NRAHLF.org, Secretary Zinke was confirmed by the U.S. Senate and sworn in as the 52nd Secretary of The Interior on Mar. 1, 2017. He immediately issued two secretarial orders to right the wrongs of the previous administration, including:

• Issuing Secretarial Order (SO) 3346 overturning the Obama administration’s last-minute blow to sportsmen on Jan. 19, 2017, that would have banned all lead ammunition and fishing tackle on national wildlife refuges by 2022;

• Issuing SO 3347 advancing conservation stewardship, improving wild game and habitat management and increasing outdoor recreation opportunities by directing bureaus and agencies to identify areas where hunting and fishing could be expanded.

• Issuing SO 3356 directing federal land managers to expand access for hunters and anglers; enhance hunting and fishing programs for America’s youth, veterans, minorities and others who traditionally have had lower participation in outdoor activities; and amend national monument management plans to ensure the public's right to hunt, fish and target shoot;

• Approving $21.9 million in grants for the USFWS and its partners to fund wetland conservation projects;

• Announcing the creation of an International Wildlife Conservation Council to advise the Department of The Interior on international conservation issues;

• Announcing the creation of the domestic Hunting and Shooting Sports Conservation Council to provide the Secretary of the Interior and the Secretary of Agriculture with input regarding the establishment and implementation of existing and proposed policies impacting wildlife and habitat conservation;

Regarding that last accomplishment, I was proud to be standing a mere few feet away from Secretary Zinke as he signed SO 3362 in the Mule Deer Foundation’s booth at the Western Hunting and Conservation Expo on Feb. 9. And in case you are wondering how hands on he is when it comes to wildlife conservation programs, he joined my wife and I and a group of other volunteers earlier that morning to participate in the MDF’s trap-and-transport program to move deer from urban areas to the wilderness. As Zinke inserted an ear tag on one of the deer to be transported, we noted that demonstrating one’s commitment to wildlife doesn’t get more “hands on” than that. 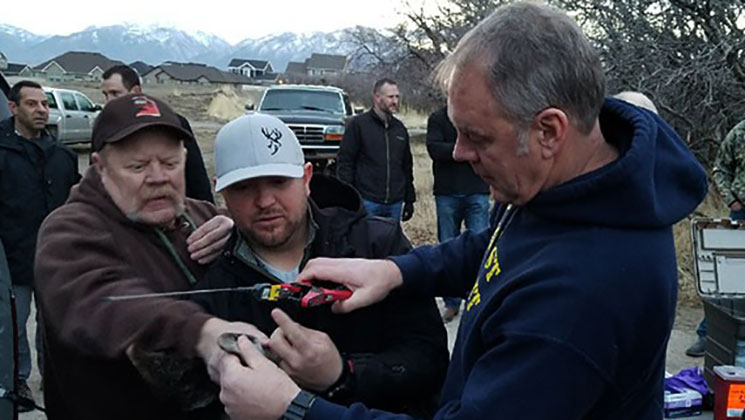 So in examining all of the above—as noted repeatedly by NRA’s own Chris Cox—Secretary Zinke recognizes that hunters and anglers are the backbone of successful fish and wildlife management. This is why he has prioritized hunting and fishing access from day one.

Worth repeating, again Secretary Zinke accomplished all of the above in one year. That’s what happens when you have the right man for the job—a secretary whose heart is in the job. The good news is that as we look to the future, it is obvious there is more to come.

Editor’s Note: Secretary of The Interior Ryan Zinke is a proven leader whose policies will continue to impact hunting, wildlife conservation and land-access issues on millions of acres of public lands. His book “American Commander: Serving a Country Worth Fighting for and Training the Brave Soldiers Who Lead the Way”—published a few months before President Donald Trump offered him his current position—provides a straightforward assessment of how he views the federal government’s role in local land and wildlife management. It also shares his experience as a 23-year veteran of the U.S. Navy SEALs and a decorated officer who earned two Bronze Stars as the acting commander of Joint Special Forces in Iraq. To read the NRAHLF.org article outlining the book, click here.