Editor's Note: This article is a reprint of a blog post entitled "A Long Time Coming—Hunter Smith's Inspiring Story" on the Kicking Bear website.

Imagine this: You want to run a race but have no legs. Or, you want to be a public speaker but are mute. For some folks, these are realities. Of course, most fully able-bodied folks, including me, take for granted the ability to chase our dreams. It isn’t until we meet people with a disability that we understand the handcuffs that hold them back from chasing theirs.

Hunter Smith is one such young fellow who believed his dreams always would be just dreams due to his limited mobility. Thankfully, a faith-based organization connected with Hunter found creative ways to make his dreams reachable. Here’s how the Kicking Bear Foundation changed his life.

Making the Impossible Possible
“Hunter is a fun, always-smiling kid who likes to tell jokes and pull pranks,” Kicking Bear’s founder Ray Howell shared. “While conversing with Dan, Hunter’s father, I discovered that Hunter had dreams of going hunting, but due to his limited mobility, Dan thought it would be impossible. I told Dan that I was going to make some phone calls, and that we would find a way to take him hunting.

In November 2016, Hunter was in a blind at Cedar Hollow Lodge in Grayling, Mich. He was joined by his father and his guide, Ryan Gati—another incredible man who loves to help kids. 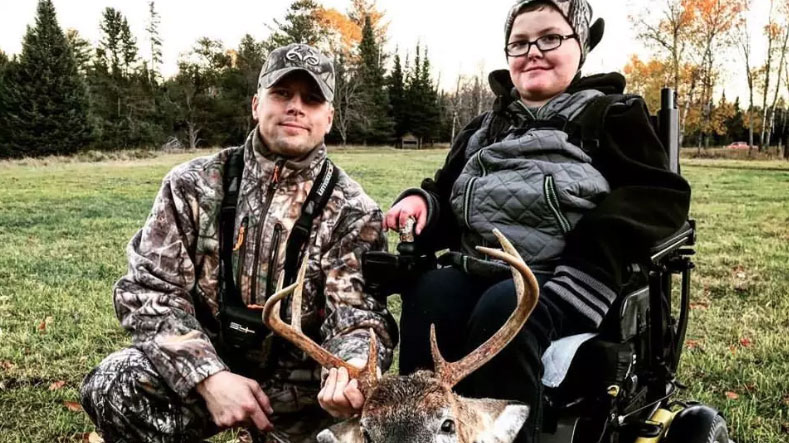 “Using a gun with the ability to place crosshairs on the target by viewing a screen,” Howell explained, “Hunter’s limitations suddenly disappeared. He was incredibly accurate and made a humane shot—just like any other sportsman—on the second day of his hunt when an eight-point buck stepped out. He was able to provide meat for his family for a year. More importantly, Hunter had a new-found love for the outdoors, and similar to all sportsmen, wanted to continue pursuing his dreams.”

A Long Time Coming
Following his successful deer hunt, Hunter openly expressed his desire to hunt for black bear. Howell arranged with friend Joe Paul, a conservation warden with the Wisconsin Department of Natural Resources (DNR), to get Smith into the bear woods.

“Warden Paul is co-founder of Oconto River Kids (ORK), which is an incredible organization that helps kids with critical illnesses achieve their dreams through hands-on outdoor adventures,” Howell said. “Annually, the Wisconsin Wildlife Federation (WWF) partners with ORK to choose one hunter to receive the WWF Learn-to-Bear-Hunt tag for use in a Wisconsin DNR-sponsored program,” which is conducted in Price County, Wisc. Hunter was the recipient in 2017. Gati came across Lake Michigan with a specialized firearm system to help with the hunt.

“We’d prepared for this northern Wisconsin hunt for months,” Howell told. “Accessing our hunting location was quite complicated. It took Gati, Paul and me to push Hunter’s heavy wheelchair through the rugged paths to the blind.” 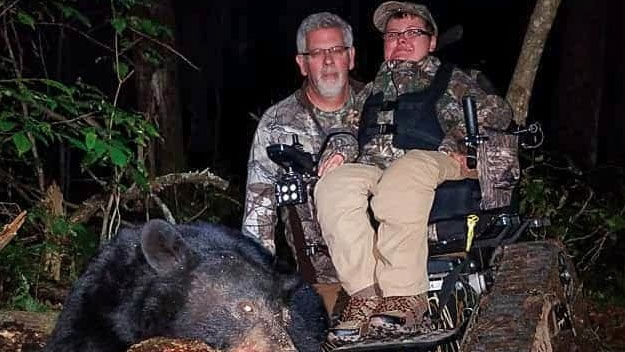 After taking a white-tailed deer on his first hunt, Hunter Smith’s (right) dream was to one day take a black bear. Kicking Bear Foundation and several partnering mentors and donors made it a reality. His father, Dan Smith, was thrilled to see his son fulfill his dream. (Image courtesy of Kicking Bear Foundation.)

During the last hour of daylight on the first evening of the hunt, a nice-sized bear walked in and started devouring the bait. “Words can’t express the excitement we all felt,” Howell said. “Hunter nearly got his opportunity but, unfortunately, it didn’t happen that night. Each time the bear was correctly positioned, we couldn’t get the red dot on him quick enough because he didn’t stop moving.”

The hunt continued, and over the next several days, the bears wouldn’t come in close enough for a shot. “A few times, we saw bears circling the bait, but they wouldn’t enter,” Howell remembered. “Eventually, another bear showed up, but again, it didn’t quit moving and we couldn’t get the gun lined up for a shot. The bear grew nervous and left.”

Still, there wasn’t a dull moment in the blind, as Hunter’s jokes kept the older men entertained. “With plenty of candy bars and donuts available, Hunter told Howell, “Ray, if you get out of line, I will tell your wife what you’ve been snacking on!” Giggles followed. The most enjoyable moments of the hunt were quality time, storytelling and, of course, pulling pranks.

One Hunt Ends, Another Begins
Soon it was the final evening of the hunt. “Everything was silent when one of the largest black bears I’ve ever seen walked in,” Howell said. “The red dot was on the bear, and he only needed to turn a little bit to give Hunter the right shot angle.” As if the mature boar had a sixth sense, it left without any shot opportunity. The group went from the highest of highs to the lowest of lows as Hunter’s 2017 hunt came to an end.

Paul suggested that he possibly could locate a bear-tag donor through the state’s youth-and-persons-with-disabilities-bear-tag-transfer system for the fall of 2018. Gati’s last words to Hunter that evening were, “Whatever it takes, I’m going to help you get your bear.”

Sure enough, the following spring, Paul learned that a hunter who drew a 2018 bear tag wanted to donate his tag to Hunter. “Once again, Paul, Gati, Dan and I were going to be a part of Hunter’s bear hunt,” Howell said. “This time our equipment was a bit different. Hunter had a new Trackchair, which increased his maneuverability, and Ryan had brought along a new gun—the Guardian.” 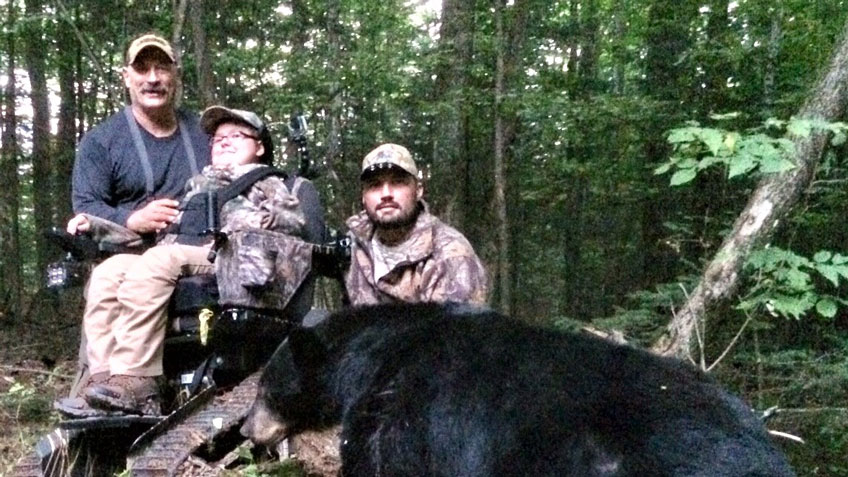 Hunter Smith (middle) was provided with specialized equipment, including a Trackchair wheelchair, in order to go bear hunting. He took this a bear during his second season of hunting with help from Ray Howell (left) and Joe Paul (right). (Image courtesy of Kicking Bear Foundation.)

Brian Park, founder of the Ray Park Foundation, had designed the astoundingly accurate and quiet gun. “You can watch everything on the screen without even touching the gun," Howell explained. "In fact, ORK was so impressed that it purchased the Guardian so that it will be available to more kids who require this specialized system.”

The team saw bears during the first evening, but none came within Hunter’s comfortable shooting range. “On the third day, we were all in the blind having so much fun that Paul said, with a big grin on his face, ‘Maybe we should try to be a little quieter,’ but he was instigating just as much trouble as the rest of us,” Howell said, chuckled.

Suddenly, Gati exclaimed, “There’s a bear!” Sure enough, a huge bear about 100 yards out was ambling toward the bait.

“You can’t imagine how hard our hearts were pounding and how loud Hunter was breathing,” Howell remembered. “The anticipation of the bear coming within range was indescribable.

The bear lumbered in cautiously and turned broadside at about 20 yards next to the bait. Hunter touched off the trigger mechanism, and the bullet connected. “It was a perfect shot,” Howell said. “The bear ran about 50 yards and expired.”

Finishing Touches
Hunter made unique bear-claw necklaces for each of his mentors as gifts. “Whenever I look at mine or feel it hanging around my neck,” Howell said, “it reminds me of how God can orchestrate an opportunity to make the impossible possible. Organizations that are focused on Him can collaborate to help others achieve their dreams.”

About Kicking Bear: Kicking Bear is a nationwide faith-based, non-denominational youth ministry that allows underprivileged and at-risk youth—or any youth—the opportunity to enjoy God’s creation while experiencing fun outdoor activities. Hunter Smith’s incredible story is one of thousands that the Kicking Bear Foundation has cultivated.