"In her time as first lady, Mrs. Trump has been a strong proponent of preserving national treasures so that people may enjoy and appreciate their historic value to the nation for generations to come," said a White House representative in a statement shared by UPI. One of the pillars of Mrs. Trump's "Be Best" initiative is well-being, which the First Lady says is served by visiting the natural beauty of the American outdoors.

“This trip highlighted some of the beautiful national parks, lands and waters that make up our country,” the First Lady said in a Department of The Interior (DOI) news release issued late Friday. “Spending time outdoors with children and learning more about our incredible and complex surroundings was a very meaningful experience for me. I want to thank the people of Wyoming for making me feel so welcomed. I also want to thank the many dedicated organizations including Jackson District Boy Scouts and the National Park Service for all they do in protecting and taking care of our national parks." 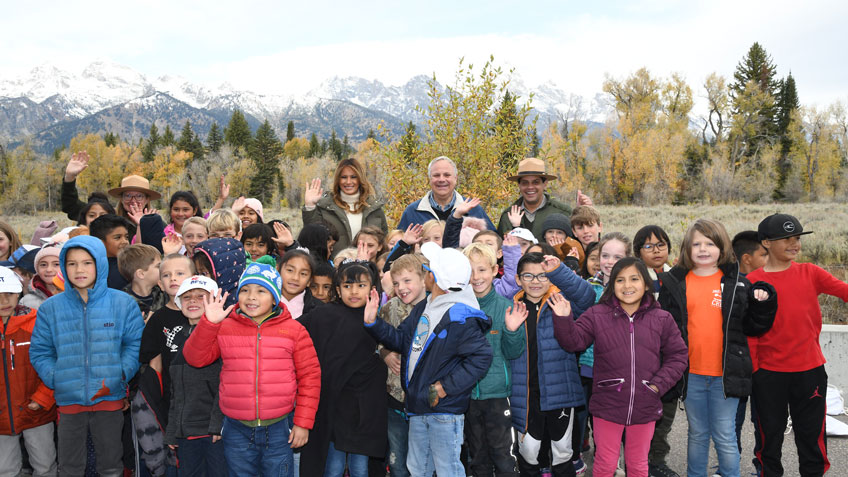 An avid outdoorsman who has expanded hunting and fishing opportunities on dozens of wildlife refuges and thousands more acres of other public lands, SOI Bernhardt said, “Grand Teton National Park and the Department of The Interior were honored to have the First Lady visit today. America’s National Parks and public lands provide great opportunities for children to explore, investigate and learn.”

As SOI, Bernhardt works to promote the DOI’s mission to conserve and manage the nation’s natural resources and cultural heritage for the benefit and enjoyment of the American people. Acknowledging the First Lady’s efforts to encourage America’s young people to take advantage of such opportunities to learn, Bernhardt added, “The First Lady's advocacy for children to 'Be Best' is right on the mark! The Every Kid Outdoors Program is also a great way for fourth grade students to expand their horizons and be their best selves by experiencing the wonder of public lands. I am hopeful that fourth grade students, their parents and their educators take full advantage of the Every Kid Outdoors Program.”

Replacing the Every Kid in a Park Program, Every Kid Outdoors specifically focuses on children 10 years of age—the age of most fourth-graders—based on research that indicates children between the ages of 9 and 11 are at a unique developmental stage in their learning. As the program website explains, this is the time when they begin to understand how the world around them works in more concrete ways and they become more receptive to engaging with nature and the environment. By focusing on this age group, the program provides America’s children with the opportunity to visit their federal lands and waters by the time they are 11 years old.

An NRA Endowment member, Karen worked in the NRA public relations arena prior to joining NRA Publications in 1998. She is the founding editor of two NRA official journals: America's 1st Freedom and Woman's Outlook. National writing awards include being named the 2015 Carl Zeiss Sports Optics Writer of the Year. She actively promotes women and families in the outdoors. She is also a member of the Washington metropolitan area's Fairfax Rod & Gun Club, a founding member of the Professional Outdoor Media Association, a member of Safari Club International and a Life Member of the Dallas Safari Club and the Mule Deer Foundation.