I tried to calm my shaking hands long enough to get an accurate estimation through my binocular of the herd of deer moving toward us, unaware of our presence. It slowly fed into a small opening, well within comfortable shooting range. I looked at my oldest son, Sage, beside me, snuggled into his rifle as he waited for me to give him the go-ahead. I found a deer by itself on the edge of the meadow, feeding broadside. After confirming with Sage that he was on the right animal, I told him to switch the safety off, take his time and fire when he was comfortable. A deep breath and audible click beside me signaled the crisp Montana morning was about to be awoken and, if everything went according to plan, a new hunter would be started down the path like generations of his family before him.

Growing up hunting with my father, I looked forward to the day I could pass on the lessons I learned to my own children. As most hunters can attest, memories forged in the field are hard to top and provide a lifetime of bonding and excitement. Sage had expressed his interest in hunting early on, and with this fall being his first opportunity at big game, we started preparing. 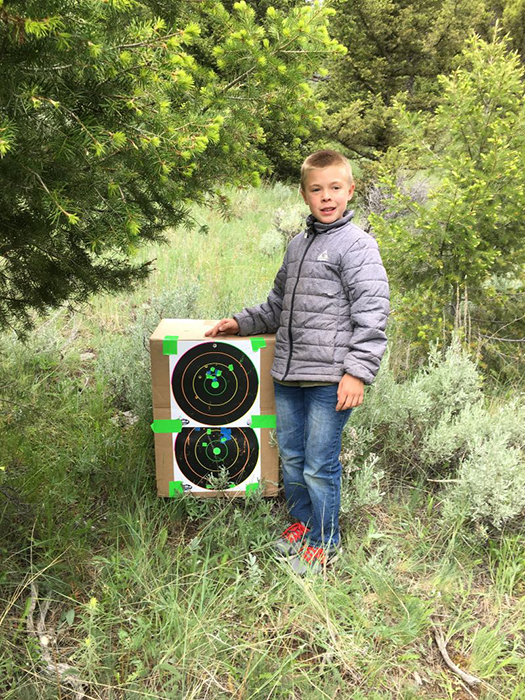 The first order of business for a new hunter is to be able to safely handle, load and operate his or her hunting rifle. The author ensured his son Sage got plenty of time to practice. (Image courtesy of Jordan Voigt.)

A relative generously made me a deal on one of his own children’s rifles and we were in business. The 7mm-08 fit Sage well and, loaded with reduced recoil loads, was a natural progression from the rimfire rifles he had shot for the past several years. After familiarizing Sage with the intricacies of his new rifle and he demonstrated he could safely carry, load and unload it, we began shooting. The spring and summer were spent practicing different scenarios and shot placement. Once Sage could adjust the magnification of his scope for various ranges and developed his shooting proficiency, he began learning the importance of shot placement and where the vitals on animals are located. We spent numerous evenings at the kitchen table poring over pictures in outdoor magazines of game standing, bedded, quartering and the like. As Sage began to see the difference in shot placement at various angles, I would flip through, find an animal and have him tell me where he would hold for an ethical shot and whether there was a shot opportunity. He picked things up quickly.

As we began to put Sage’s gear together, he was intrigued with the different equipment required to round out his day pack and keep him hunting safely and effectively. Several afternoons were spent at the sporting goods store, looking at knives, headlamps and other gear. We were almost ready for opening day. On his 10th birthday, we stopped at our state fish and game agency to get his first-ever hunting license and added it to his pack. His tools, both mentally and physically, were as prepared as we could make them. 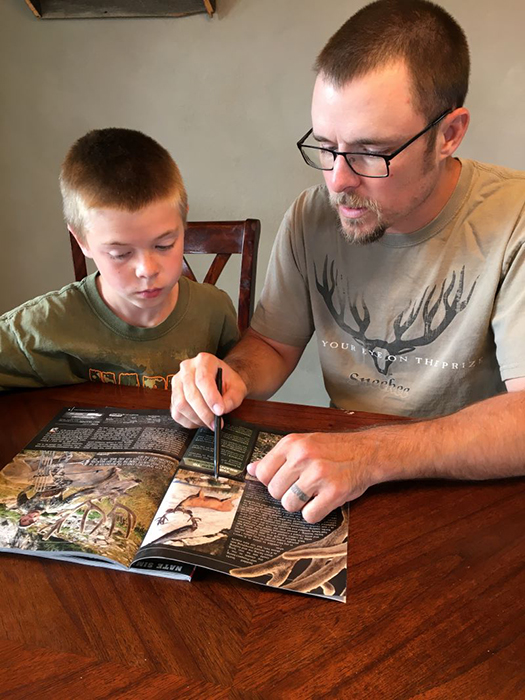 Pouring over images of deer in the field enabled father and son to discuss whether there was an ethical shot and shot placement in relation to the animal's position. (Image courtesy of Jordan Voigt.)

I had some hunts in Alaska scheduled for August and September, leaving me a short time to get ready when I got home. I unpacked wet sheep hunting gear and replaced trekking poles and pack frames with fishing rods and day packs. After talking with other adults who had children who hunted, the biggest piece of advice that I took to heart was not to get too pushy about the end result, and if Sage wanted to stop hunting for the day, to do something else that we still could enjoy together (thus the fishing rods).

On opening day Sage, Papa (my father) and I headed out for the deer hunt. We set up a comfortable camp including a wall tent, cots and a wood stove and made a plan for the morning. The stove was glowing red at bedtime and Sage snuggled into his sleeping bag with a book. Would the work he put in pay off tomorrow? Could I do my part and get him within shooting range? 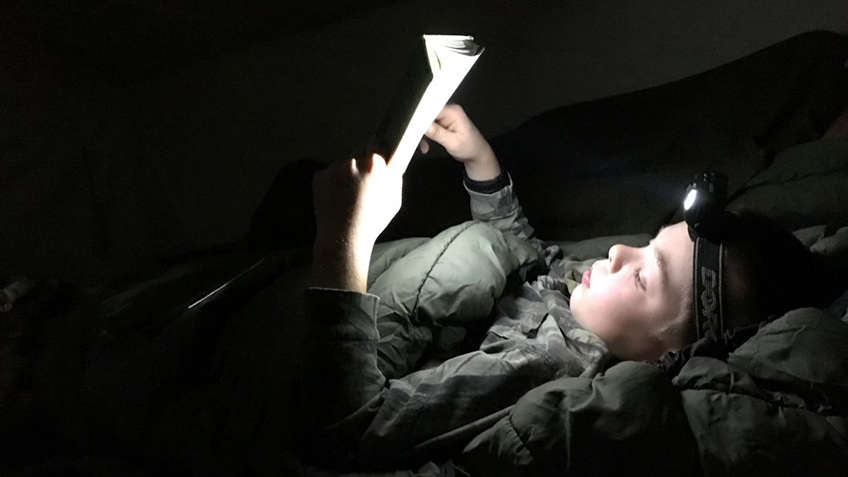 Sage relaxed in hunting camp with a book. The next day he would harvest his first-ever deer. (Image courtesy of Jordan Voigt.)

The next morning, Sage flicked the safety off his rifle and took a breath. The crack shattered the calm of the morning and a “whump” indicated his bullet flew true. A moment later a whitetail doe lay still. I looked at my son and a piece of a puzzle that dads everywhere are familiar with fell into place. Pride in my child’s accomplishment, wonder at how fast life goes by and gratefulness for the opportunity made it tough to speak for a minute. A hug, backslapping and smiles were exchanged. Sage picked up his rifle and pack, anxious to go to his first deer.

Filling a shelf in our freezer with neatly packaged venison would be a sense of accomplishment for Sage all its own. Our family enjoys game meat year-round and Sage took great pride in providing steaks and hamburger for his mom and little brother. 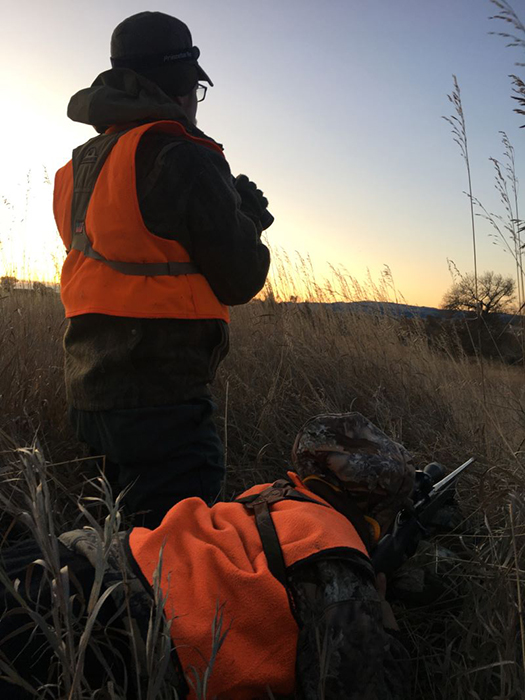 Father and son wait patiently, the father wondering if he could put his son on a deer, the son wondering if he'd still want to hunt after he'd shot his first animal. (Image courtesy of Jordan Voigt.)

I sat down with Sage while the memories from his first deer hunting season were still fresh. We had hunted the same country where I had taken my first deer 24 years earlier, with his first deer falling within 300 yards of mine. Following is an excerpt from our conversation.

Jordan: “What was your favorite memory from hunting season?”

Sage: “Probably getting to actually shoot the deer.”

Jordan: “What were you thinking when you saw a deer in range?”

Sage: “I was wondering, am I actually going to get to shoot it?”

Jordan: “What were you thinking after the shot as you walked up to it?”

Sage: “I actually shot that deer!”

Jordan: “What was your least favorite memory from hunting season?”

I was pleasantly surprised by this last answer. We experienced some tough moments in the field where Sage’s patience had worn thin, either from being cold or bored or due to circumstances out of our control such as having other hunters show up where we planned on hunting. We had several talks about rolling with the punches, being patient and hunting hard so things would come together. It was encouraging to hear his frustrations had been forgotten and that he was focused on the positive attributes of his season.

Jordan: “Was there anything harder than you thought it would be once you actually started hunting?”

Sage: “Finding a deer you could shoot that was in range and stood still long enough to shoot, then dragging it back to the pickup.”

Jordan: “Was there something easier than you thought it would be?”

Sage: “Pulling the trigger. I was scared I wouldn’t want to hunt anymore after shooting one, but that actually made me want to hunt more.”

Jordan: “What would you change for next year?”

Sage: “My patience, I would try to work on my patience.”

Jordan: “What are you looking forward to most for next year now that you know what to expect?”

Sage: “Shooting another deer, and maybe even helping another person shoot one.” (Looking forward to mentoring someone else showed how he was grounded in our hunting traditions.) 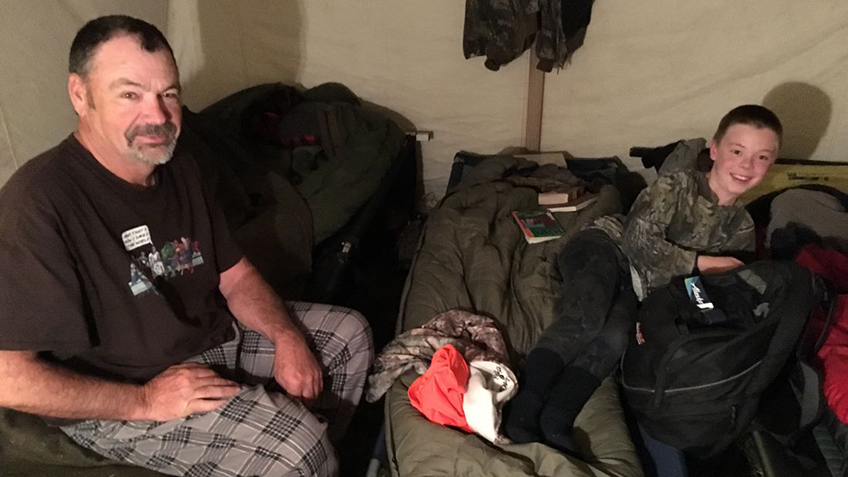 The author's father and son Sage relax in camp. Sage would take his first-ever deer in the same area where his grandfather took his father for his first deer, a fact that would have a strong impact on the young hunter. (Image courtesy of Jordan Voigt.)

Jordan: “What was it like getting to hunt where Grandpa brought me when I was about your age?”

Sage: “Things were swirling through my mind like I thought it was so cool I shot a deer in the same field my daddy did.”

This season was a first for both Sage and I—for him as hunter and myself as his mentor. Seeing Sage’s excitement at things I had begun to take for granted was refreshing—the warmth of the woodstove, the clear night sky unspoiled by city lights and watching the unadulterated happiness of a boy in hunting camp.

The hunt brought us closer together and gave us memories and stories, a freezer full of game meat and a set of antlers for Sage’s wall that he loves to look at as he carries on our family legacy. Maybe the most important lesson for the beginning hunter was that with patience, hard work and follow-through, there’s a lifetime of adventure out there.

With the pickup loaded with camp equipment and fresh venison, Sage, his Papa and I headed for home. He was anxious to relive the hunt with his mom who was waiting anxiously to hear how our adventure had gone. Sage was uncharacteristically quiet in the back seat so I asked him what he was thinking about.

“Dad, do you think I can bring my kids here for their first hunt?” 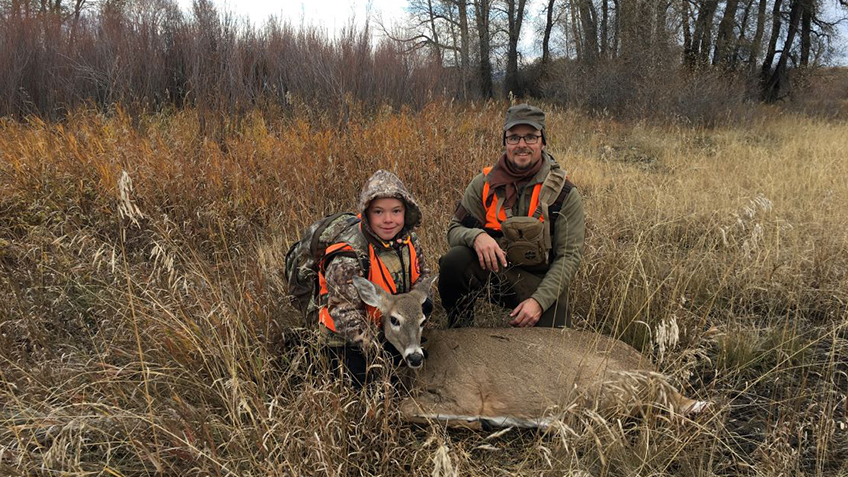 The author and his son got to hunt private property for Sage to harvest his second deer and wrap up his season. (Image courtesy of Jordan Voigt.)