CD Kunzie, 23, of Iowa had planned to hunt elk but then he heard of a great price on a five-animal African plains game safari that would be less expensive than the western trip. When the outfitter agreed to charge his girlfriend, Sydney, 19, just $50 per day, the two were Africa bound. Having been there multiple times and having been approached by my grandson Zachary about going on a safari, I said I’d set up the hunt and immediately put together a group of eight hunters to head for adventure on the Dark Continent.

Flying from Kansas City to Johannesburg, South Africa, took nearly a full day, but the time passed and we soon found ourselves at the Afton Safari Lodge, a guest house that specializes in hosting hunters. CD wanted a kudu and a zebra for sure and had no idea how difficult that later animal would be. Despite what many may think, tagging a zebra with a bow and arrow can be one of the most difficult challenges in Africa. Hunting dawn to dusk for six days, he and Sydney wouldn’t even get a glimpse of the elusive stripes and only on the final day would opportunity knock.

To the Hunt
Early on the first full day in country, safari company owner Rassie Erasmus and professional hunter (PH) Piet Otto arrived at the Afton Safari Lodge to pick up our group and our gear for the four-hour drive to Rock Haven. CD is a bowhunter and planned to use his 70-lb. Mathews compound while Sydney planned to borrow one of the camp crossbows. As an experienced shooter, she practiced in camp and was set to shoot out to 20 yards.

The hunt began after lunch with CD and Sydney teamed with Kristy Erasmus, the outfitter’s daughter, who knew the property and its game well. They hunted in a ground blind near camp, saw five species of game including a “management” kudu, but the elusive zebra didn’t show. 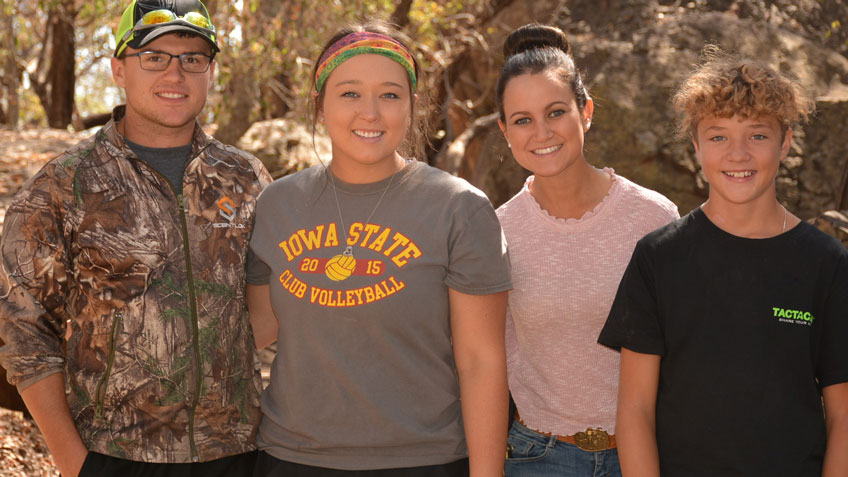 The author enjoyed having young people on the safari. Pictured are CD and Sydney, the landowner's daughter Kristy Erasmus and the author’s grandson Zachary. (Image courtesy of the author.)

In their first full day of hunting, CD and Sydney hoped to see a zebra. “We had three big kudu bulls come to drink in mid-morning, one of them a shooter, but we decided to hold out for the zebra,” CD said that evening in camp. However, when the striped ghosts hadn’t shown by late afternoon and the kudu returned, the young Iowan decided it was time to launch. “The shot was 18 yards and the Rage Hypodermic broadhead did its job as the bull went just over 100 yards before crashing,” CD said, full of excitement in reviewing an incredible first day of hunting in South Africa.

Now it was Sydney’s turn. As an enthusiastic college student of 19, Sydney loved the experience of hunting in Africa and after a couple of days told CD she was ready. She had been practicing with an Excalibur Micro crossbow and quickly showed proficiency. “I was shooting quarter-size groups with the tripod, so I definitely felt confident,” she said.

First up: an impala, which she admitted was a bit stressful. “We had so many opportunities and I was nervous about making the perfect shot,” she said—the mark of an ethical hunter. “Every time I’d get the right angle, I’d take a breath and the animal would move.”

Finally, a bachelor group showed up and she picked out a management ram. “I took a deep breath, exhaled and followed through the scope after the shot,” she said. “The arrow hit perfectly. It was an awesome feeling and made me feel humble being in Africa. I never thought in a million years I’d be here so soon.” 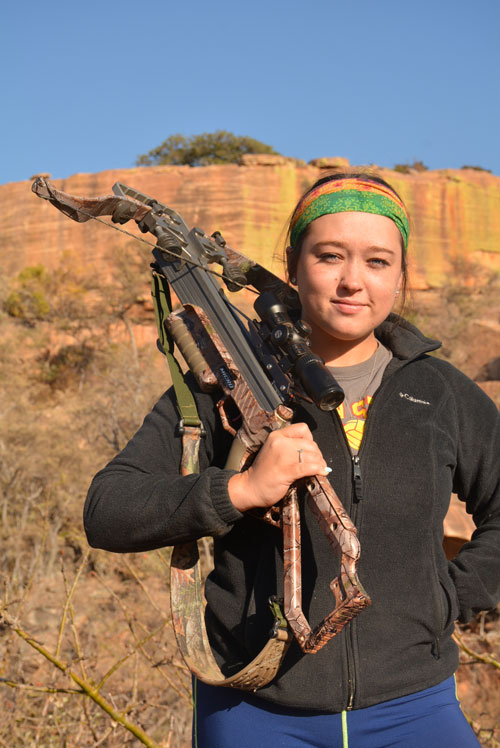 Sydney hails from Iowa and at 19 already is an experienced hunter for turkeys and deer. She could shoot quarter-size groups with the Excalibur Micro and was proficient at 20 yards. (Image courtesy of the author.)

Yikes, Stripes!
Sydney would take a warthog late in the safari and CD a wildebeest and an impala, yet the zebra atop their wish list seemed elusive. On their last day just before noon, a herd of zebra appeared in the distance, standing and watching for danger. “I couldn’t believe how smart those animals were,” CD said. “They stood and watched the water for an hour before approaching.”

Finally, the herd came to drink and CD got his chance, picking out an old female that went just 80 yards after the shot. “I really studied that shot book and knew to shoot at the triangle on the shoulder.” (“The Perfect Shot II: A Complete Revision of the Shot Placement for African Big Game” by Kevin Robertson is the updated version of the original.)

The Essence of a Safari
African safaris offer the opportunity to take multiple trophies in a single trip, yet when asked what the two liked best about the trip, what they shot wasn’t at the top of the list for CD or for Sydney.

“I wanted to go to Africa after watching TV shows and the Discovery Channel about African animals,” CD said. “Unlike hunting whitetails, we were in an entirely different environment—a whole different world. Everything was different from the trees to all the different species. You never knew what was going to show up.”

Fortunately, CD had brought a video camera and also had used a Tactacam video device. “Getting to see and film the animals and their interaction was exciting,” he said. “One day we discovered that there was a python in the water hole and the monkeys were going crazy, warning other animals of the danger. When it crawled out, it was 11 to 12 feet long and a foot in diameter. It began crawling toward the blind but eventually changed direction. I’m not scared of snakes—but that was a different matter.”

Sydney never thought that she’d see Africa so soon in her life, loved the experience and hopes to return. “I didn’t expect to see as many animals, and I never thought I’d see a giraffe.”

She added, “I think my favorite part, other than getting to travel, was to meet different people and finally get to meet the other hunters and Rassie, the landowner. I’m a big people person and love that experience and seeing animals in the wild.”

Seeing a variety of animal species is always high on any safari-goer’s list and Sydney was no exception. She knew she’d see zebra and impala, but she said she didn’t expect to see Cape buffalo nor did she realize that they are so large. “I was most excited to see a zebra in the wild,” she said. “They are so smart.” 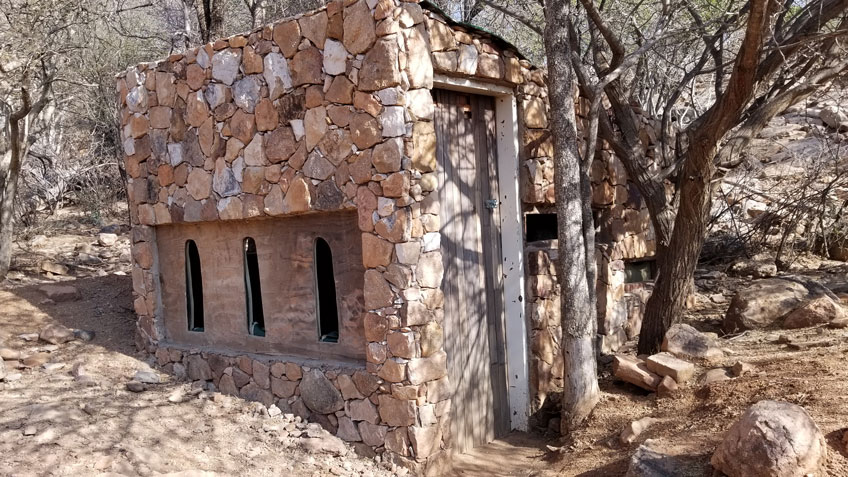 Two Rock Haven blinds are elevated while the rest are roomy, built from stone and wood, and make excellent ambush points. (Image courtesy of the author.)

You Can Too
If CD and Sydney live 150 years, they will never regret this trip. It will be a shining memory in their relationship and their lives, and it only happened because they avoided the “someday syndrome” and did it now. Forget someday. Plan now to take advantage of the most exciting and economical hunting trip of your life. You can put together a five-animal safari for two people, depending on the plains game species you want to hunt, for $5,000 to $6000. Here’s how.

First, get a group of four to six hunters (couples or friends). It’s way more fun this way and you’ll get the best price from an outfitter because you are bringing a larger group. Next, each of you might want to get a credit card through an airline carrier such as United Airlines and run your daily expenses through it. You get 40,000 air miles to begin, and by running your phone, utility and other bills through the card, you’ll quickly reach the 80,000-mile threshold needed for a free international airline ticket. Just a thought.

In January or February of the year of your hunt, attend a hunting show such as the NRA Great American Outdoor Show, the Safari Club International Hunters’ Convention or other outdoor show where you can speak directly with safari operators. The rand, South Africa’s currency, currently is weak at 15:1 in relation to the U.S. dollar, and safari companies are anxious to do business. 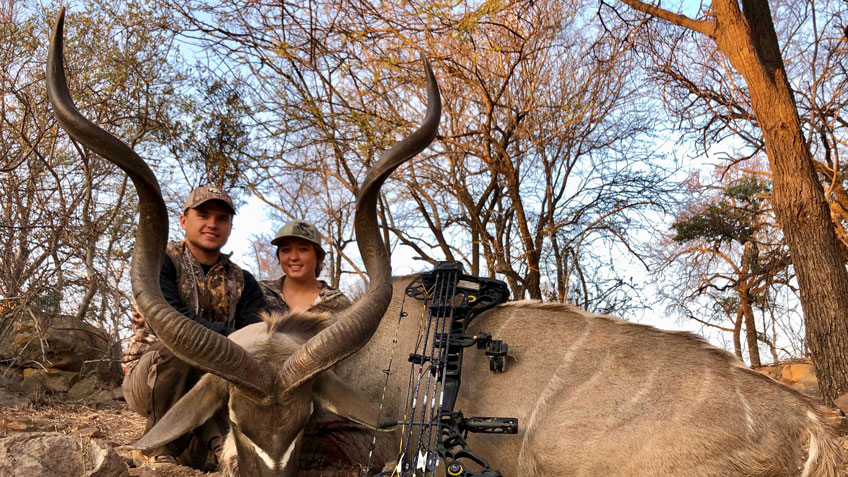 CD took this trophy kudu bull on the first full day of hunting on the safari. The shot was 18 yards and the animal expired quickly. (Image courtesy of the author.)

If you are well-funded, take the best deal and book your airfare. If you have a limited budget, focus on one or two animals with the option to take another game species or two that may present a shot opportunity. You can pay a fee for any extra species after the fact at the end of your hunt. A few companies such as Erasmus’ Louwlardus Safaris also offer management hunts that can save substantial sums. For more information, contact Rassie Erasmus at [email protected].

An African plains game safari is absolutely the best deal in hunting today and the adventure has no downside. You’ll see plenty of game, eat what you shoot in camp (as you can’t bring game meat back to the United States) and/or provide protein for local villages while enjoying a fully guided hunting experience topped off with delicious meals and the best campfires in the world.

After his trip CD recommended it heartily. “Save your money and I suggest you do it while you are younger and fit. If I get the chance, I’ll definitely do it again.”

Editor’s Note: As this website has repeatedly reported, the CECIL Act, which is currently winding its way through Congress, jeopardizes the importation of hunting trophies, thereby threating all hunting beyond U.S. borders. NRAHLF.org will continue to monitor the bill’s progress, so be sure to check back here before committing to any hunting trip abroad.

About the author: Joe Byers has been an avid hunter and outdoor writer for the past four decades, resulting in thousands of blog posts, articles and published photographs. A crossbow enthusiast, he is the author of “The Ultimate Guide to Crossbow Hunting,” which includes several chapters on his African adventures at Rock Haven.