Accepting the Challenge of Handgun Hunting

My own handgun hunting exploits began long ago in a sleepy suburb of Los Angeles called Pasadena, Calif. The house my parents bought when they migrated west from the bitter cold of Milwaukee, Wisc., was a typical California ranch-style home, sitting on a 1-acre lot. The large number of trees and shrubbery fueled my imagination. With my CO2 pellet pistol by Smith & Wesson, I turned that back yard into Alaska, the deepest darkest recesses of Africa, the western plains, the southeastern swamps… Little did I know that what started in the '70s in my parents’ back yard would become a lifelong passion and obsession for me.

The first revolver I would come to call my own was handed down to me by my late father. It was a Smith & Wesson Model 36 in .38 Special. My imagination made up for its lack of bore diameter. Immediately following high school, the Marine Corps distracted me for the early to mid part of the 1980s, but when I got out, the big-bore revolver bug bit me hard. A few .44 Magnums from a number of manufacturers passed through my hands in those days, and I enjoyed my foray into handloading. In college, I dreamed of owning one of the berserk wildcats that a gentleman in Cody, Wyo., was producing on Ruger frames. That man was John Linebaugh and he was creating previously unthinkable power levels in a hand-held package. Freedom Arms’ Model 83 in .454 Casull, the brainchild of none other than Dick Casull, also had my adrenaline pumping. Someday, I thought, I would be able to afford some of these revolvers. I was convinced. (Author’s note: I have them now, but still can’t afford them.)

Then one day, back from an overseas stint as an aid worker in some unfriendly corner of the world, as was my habit in those days, I stopped into my local childhood gun store, the now-defunct Lock, Stock ’n Barrel, to see how the guys were doing and to see if there was anything interesting in their display case. There it was, in all of its gray glory, the all-new .480 Ruger Super Redhawk! I was drawn to it like I was under its spell. I purchased it on the spot. (I still had to wait 10 days to take delivery—silly California laws.) Not long afterward, my Super Redhawk spilled its first blood, a couple of Florida wild hogs. There was no turning back as I sought more and more power. 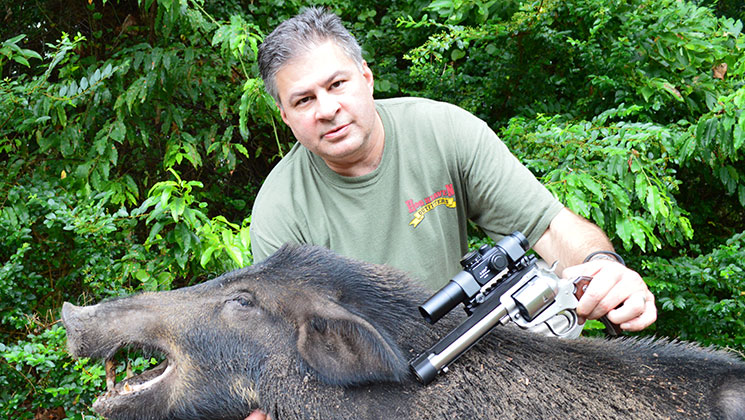 The challenge of mastering a high-caliber handgun in combination with needing to get close to one's prey, is what attracts the author to hunting by handgun. He started early and eventually retired his rifles; he now hunting solely by handgun.

Though I started hunting with a handgun fairly early in life, about two decades ago I all but stopped hunting with a rifle of any kind and gave my all to handgun hunting. What I have found over the years is that a handgun, in general, is harder to master than a firearm that is supported with a buttstock pressed against your shoulder. Revolvers capable of comfortably taking large and dangerous game, chambered in big, powerful rounds are exponentially harder to master. It’s just a fact of life. That said, even large caliber handguns don’t necessarily need to be loaded to “ouch, that hurts” levels in order to be effective on big game. I have also concluded that due to the inherent limitations built into the platform, requiring the hunter to get much closer to his or her intended target, any and every game animal taken with a handgun is a prized game animal, and it is infinitely more satisfying when success brings home the venison (or whatever meat). 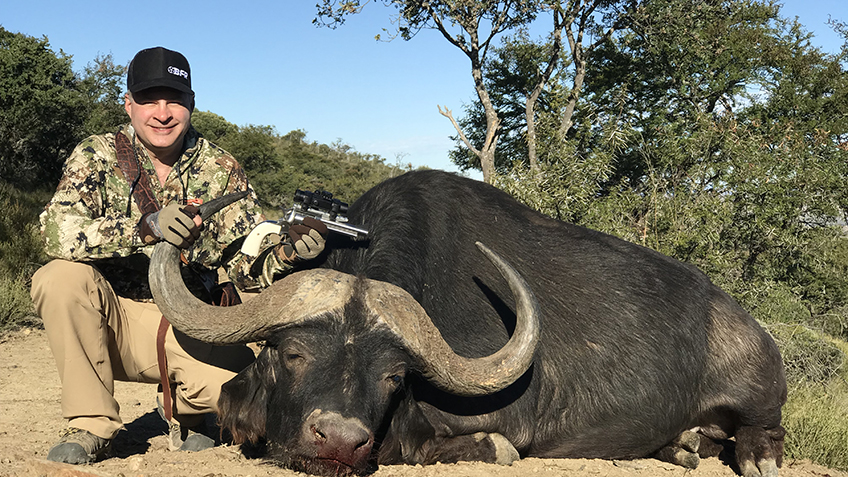 The author successfully took this water buffalo with the handgun. (Image courtesy of Max Prasac.)

There’s much to like about going afield with a handgun in place of a long gun, the most obvious being ease of carry. Expect your revolver to come in under 4 pounds loaded. If you choose a chest/shoulder rig, or even a belt holster, you will have freed up your hands for other chores. You will never find yourself in a situation where your rifle is propped up against a tree and out of reach when you need it. This size advantage extends to tent and sleeping bag use for obvious reason. Handguns are also easier to press into service if you find yourself underneath an angry fur-bearing animal bent on exacting damage to your physical being. But I digress…

As I mentioned previously, the built-in restrictions like a barrel/cylinder gap (in the case of a revolver), a short barrel and limited powder capacity all add up to limit the capabilities of the platform as a primary hunting tool. If they are so limited, why use them? Good question. By limited I do not mean inadequate. When loaded with the correct bullets at the correct velocity, they are more than adequate but require skill to deliver accurately and to get close enough to work within the performance window of your chosen steed. 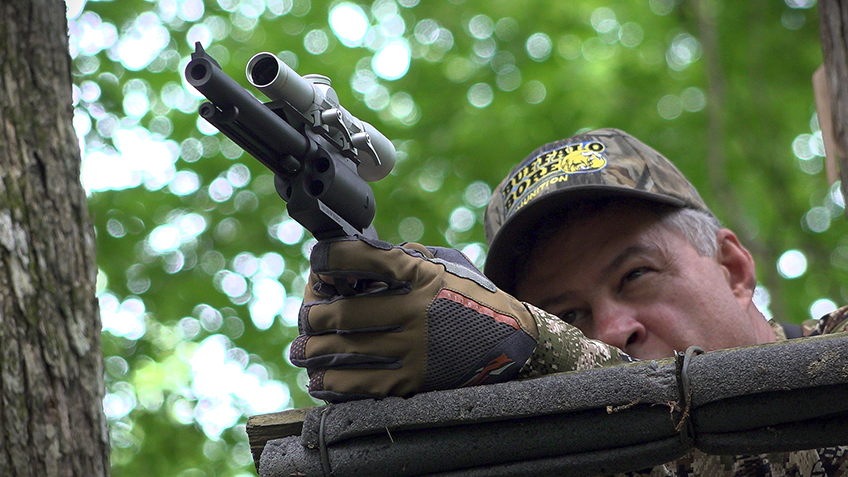 The author shoots a BFR in BB from a treestand. (Image courtesy of the Max Prasac.)

If you are the seasonal hunter who pretty much sticks to his or her routine every year as far as practice rituals are concerned, who you hunt with and where you go every year, maybe it’s time to make some changes. Perhaps you do things the same way every season and use the same firearms that have reliably put meat in the freezer and antlers on your wall time after time. Maybe you are getting a bit bored with the status quo.

Handgun hunting for me is singularly challenging, exceedingly rewarding and absolutely exciting. While I practice at what some would consider longer ranges with a wheelgun, for me at least, getting close—real close, captures the essence of handgun hunting. I want to smell the bad breath of my quarry. If you find yourself losing enthusiasm for hunting, perhaps a change in firearms is in order. A handgun just might put some spring back in your step!

If you're interested in hunting with handguns, you can watch Max Prasac hosting the handgun hunting show “Big Iron” on Amazon Prime or RecoilTV.

About the Author: Max Prasac is the host of the handgun hunting show “Big Iron” on Amazon Prime and RecoilTV, is an outdoor writer and the author of the "Gun Digest Book of Hunting Revolvers," "Big-Bore Revolvers" and the "Gun Digest Book of Ruger Revolvers: The Definitive History," specializing in terminal ballistics and big-game handgun hunting. Max is a regular contributor to this NRA website and to NRA Publications’ American Hunter magazine and Gun Digest magazine. He is a Life member of the National Rifle Association who resides in Virginia with his family, two dogs and a turtle.