How I Ate Deer Tag Soup and Loved It

I just finished hunting deer. Every day. For two weeks. Didn’t get one. And loved it.

How can anyone put in that much time and effort, fail and honestly say he or she loved it?

Well, because deer hunting is what I love. Not deer killing. And I doubt I’m the only one. Deer hunters across North America must feel the same as I because, despite weeks and weeks, sometimes years and years of hunting without bringing home the venison, they keep doing it. Because hunting, not killing, is what we hunters love.

We see bounding bucks in our daydreams, white tails flashing, dark antlers looming and bobbing. We see autumn leaves ablaze, yellow, amber, scarlet, gold. We smell the moist earth, the rotting foliage crumbling bittersweet toward the icy lock of winter. In our dreams, our reveries, we remember the perfume of wood smoke, the squeak of new snow, the crunch of old. We can’t wait to stumble upon the dark stain of a new buck scrape, stick our noses close and wheeze at the promising stink of rut.

And mostly, always, we long for the look of our world, the sheer beauty. The hills, the fields, the forests and trees, the sun going down in a blaze of orange, peach and gold, the moon rising quicksilver over a snow-dusted peak behind dark silhouettes of tangled limbs. 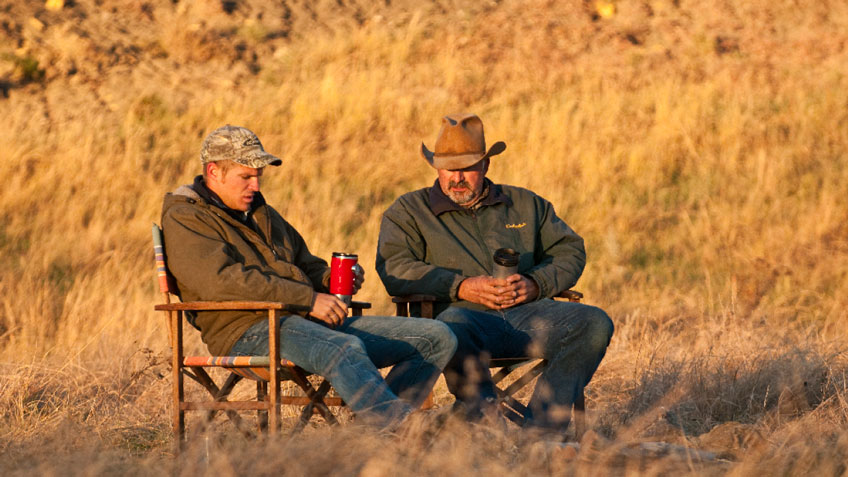 Sometimes the enthusiasm a new hunter exudes rekindles an experienced hunter's love of the hunt. It's even better when you can share that bond with a family member. (Image by Cole Eberle/Windigo Images.)

During my recent deer hunt, I had the unusual pleasure of introducing my son-in-law to deer hunting. From loading ammunition to zeroing the scope to plinking targets and rocks from 100 yards out to 500 yards, I guided him toward a good understanding of guns, ammo and ballistics. Through his enthusiasm I rekindled some of my own.

Then there was the special pleasure in playing guide, getting to “show off” a half-century of hard-earned knowledge, woodsmanship and wisdom about deer biology and behavior, about plants and habitat and how to interact with Nature. Everything from walking softly and staying off the skyline to feeling the breeze and reading the landscape, anticipating feeding sites and escape routes.

I took satisfaction in watching the young man quiver at the appearance of a forkhorn buck, equivocate while aiming at a slightly bigger three-by-three, make the hard decision whether to take a young buck or look forward to the challenge of hunting hard for an older one.

Equally pleasurable was guiding my wife to her third buck, the first off our new Dancing Springs Ranch. She was self-sacrificing enough to babysit grandkids so the son-in-law and I could hunt opening weekend. Her reward was several mid-week mornings and evenings roaming the hills, watching bands of does, glassing hard and peeking into odd corners for a buck, any buck. “We need meat,” she said. “I’ve got grandbabies to feed. And they’re getting all-organic, free-range, grass-fed venison.” 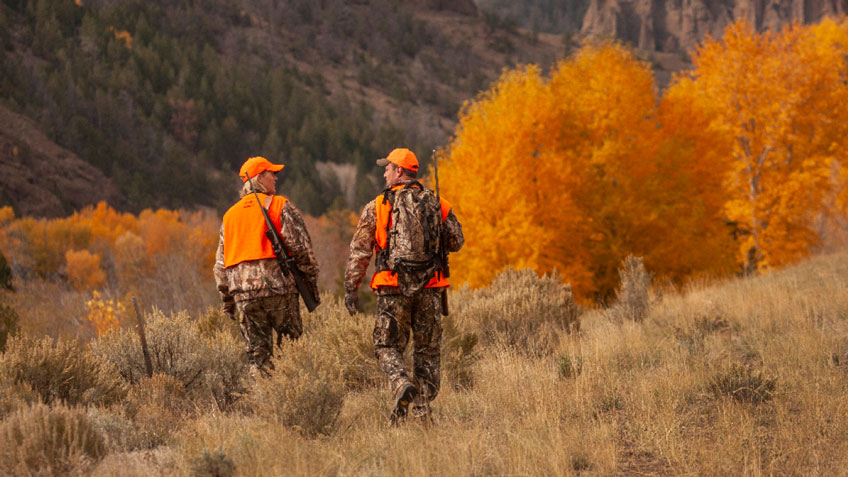 Stealing the chance to get afield with your spouse can melt away the pressures of life. Whether the hunt was successful or not, you feel closer at the end of the day. (Image by Mitch Kezar/Windigo Images.)

But it was bitterbrush-fed venison. Every deer we saw foraging had its nose in bitterbrush. Purshia tridentata, a lowly, uninspiring, largely overlooked shrub that is the foundation of mule deer survival in the late season. Reading about this is one thing. Seeing it makes it real. Look for bitterbrush and you’ll find the mule deer.

And I did, glassing the slope of Moose Hill, often finding six to eight does ravaging bitterbrush there. Sharptail Ridge often entertained two to six does and fawns. Coyote Ridge hosted 10. First Buck Basin, Sedge Basin, Lone Tree Draw—does, does, does. Mornings and evenings these bitterbrush patches were where our mule deer would be.

But old bucks? Either they weren’t hungry or they’d learned the foothills are not the place for keeping your antlers. Like old mule deer bucks everywhere, the ones on our ranch go high and stay high, sweating out the two week hunting season in dark timber, rocky canyons. But in two weeks they’ll come down as the days are ever shortening. Testosterone is running high. The time will soon be ripe for the annual migration to the foothills’ rutting grounds. Yes siree, bank on it. With the hunting season over and my unused tag cooked, chewed and digested, I’ll see the bucks of my dreams posing beside our back-40 does. And I’ll go out there to hunt them… with a 600mm lens. Because I love deer hunting. Even if it means eating tag soup.

About the author:
Award-winning outdoor writer and contributor Ron Spomer says hunting is everyone's way of connecting with true freedom—the freedom to interact with Earth as naturally as does a wolf, falcon or chickadee. During more than 50 seasons afield, Spomer has decades of hunting experience and writes regularly for multiple outdoor publications, including NRA Publications, sharing his vast knowledge on guns, ammo, optics and gear. For more information, including his top hunting tips and tactics, visit his website, Ron Spomer Outdoors.