John Horrigan and his identical twin, Robert, grew up hunting and fishing together in the wilds of northern Maine. When the twins were 10, the Horrigan family moved first to Florida and then to Austin, Texas. John and Robert enlisted together in the U.S. Army and both served in 3rd Battalion, 75th Ranger Regiment. Robert remained in the military, advancing to Special Operations and earning the rank of master sergeant.

John did not. After three years, he left the military and his literal shoulder-to-shoulder life with Robert for one reason: true love. He was 17 when he first met Donna; she was almost 15. The couple has now been married for over 30 years. They have a son and a daughter and two grandchildren. John is a fireman, and he makes knives. He is a master smith through the American Bladesmith Society.

After close to 20 years in the military Robert was in the processes of transitioning back to civilian life. The plan was for him to return to Texas with his wife and daughter and buy a house close to John’s. The twins would hunt and fish and make knives together. Bob, as he was known to his military “brothers,” did not have to join C Squadron, 1st Special Forces Operational Detachment, Delta Force, JSOC on its last mission before his retirement, but he did. And so, on June 17, 2005, in Al Qa’im, Iraq, close to the Syrian border, a door was breached and a dream died. In a fierce firefight, Bob took hits to his head and femoral artery. He could not be saved.

John lost half of himself, he was losing his mind and his will. He finally told a friend that he needed to get away, out into nature, to hunt. He got a call that, in accordance with best management practices, deer culls needed to be killed on a 12,000-acre ranch in Kingsland, Texas. John brought Donna along. She had her hunting license and had taken a hunter safety course, but had never been on a trip before. She was enjoying a mug of hot cocoa in their blind while John watched three deer 100 yards out. One of them was a cull. He suggested she protect her ears because he was about to shoot.

Those who served with Bob have well explained what it’s like conversing with a Horrigan twin. Once you get beyond the serious demeanor, the corrective gaze, the delivery as dry as a Texas wind, you catch up to the humor.

John reminds Donna exactly where on the deer to place the crosshairs of the scope and to squeeze the trigger of the Sikes .30 06 rifle.

John watches her struggle momentarily to find the target in the scope. Before he can turn to look downrange, he hears a crash and looks down to see dark liquid seeping across the blind floor. He looks up. The deer are hoofing it.

Donna had placed her mug of cocoa between her thighs, and dropped it before even taking the shot. “Will they be back?” she asks.

“Not today,” he answers.

The next day, they saw the whole herd. This time, Donna got in a shot.

“How do you think you did?” John asked, not knowing at first if it was just the excitement of her first deer or if she really hadn’t seen where her shot went.

Her shot was true, however, and she got her first and only whitetail.

“Her mount is the best one in the house,” John said.

It would be 12 years before the couple would hunt together again. 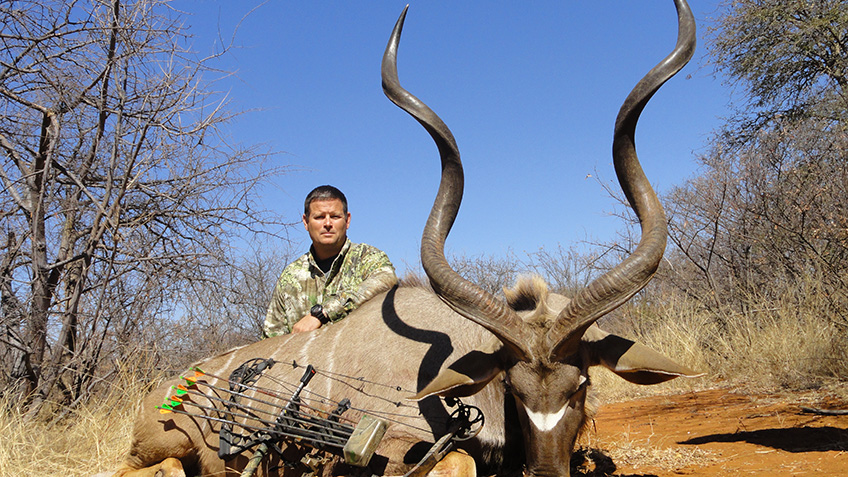 Throughout his boyhood in Maine, his life in Texas and on his adventures abroad, hunting has been a constant in John Horrigan's life of love and loss. He's taken his wife hunting with him twice, once in the depths of grieving the loss of his twin in war, once in the full beauty of love. He also now hunts with his son, passing on the tradition to one more generation.

John entered Donna’s name in the 2017 New Mexico elk lottery and she got lucky.

“We loaded up like the ‘Beverly Hillbillies,’” John said.

They had a canvas tent and cots with airpads and sleeping bags. John set up a table and camp chairs. They had a lamp for light, a stove for warmth and enough block ice in milk jugs to pack four to five igloos with elk meat. Although they were roughing it, they were as comfortable as conditions allowed.

“There’s nothing better than sitting on a camp stool in front of the stove and having long talks,” John admitted.

The hunt ran from a Saturday to Wednesday in October. The first day dawned overcast with a sprinkling rain and a high in the 20s. John emphasized that this was Donna’s hunt and that if she wanted to, they could just sleep in. She asked him what he would do.

“I’d be hunting,” he answered.

They put on rain gear and headed out to a watering hole that John didn’t think the elk would be using but where they ended up being able to observe two four-by-fours fighting. On Sunday, the weather was worse, but John bundled Donna up with every extra stitch of clothing they had and the couple laid in brush waiting for elk to cross. After two hours, they agreed to call it a day.

Monday they stripped to light clothing to make a 600-foot climb, from 8200 to 8800 feet elevation. When they got to the top, they put their heavier clothing on for warmth. John set Donna up as comfortably as possible.

“The more comfortable you are, the longer you can wait,” he explained.

John used a mouth reed to bugle up a bull. This time, he had made sure Donna felt confident firing the muzzleloader before they left. He told her exactly where to aim and she made a clean shot. John did not want to push the bull in the chance it might run or charge, so the couple returned to the tent that evening and John made a celebratory dinner of chicken and dumplings. A neighbor had given them a bottle of wine to try, and they shared that over their meal.

The next morning they found Donna’s elk not 80 yards away. It took John, who’s been butchering game since he was 7 or 8, an hour and a half to process the meat using one of the first knives he made over 20 years ago. Luck was on their side, and the hike to the truck was only a half-mile. John loaded Donna up with 40 pounds of meat for her first trip and 30 pounds for her second. He hiked out 170 pounds his first trip and approximately 150 the second time. They took the skull and antlers, as well as the sex organs in case a game warden inquired.

“The smile on her face says it all,” John said.

“My wife with her first bull elk with a black powder rifle. What a fantastic hunt. I couldn't be more proud of this amazing woman. She never complained about my cooking, never said it was too cold, too rainy. Some mornings were in the 20s. She continues to bless me each and every day. Love you to the moon and back Donna Horrigan. You had me from hello.”

There is no getting to the other side of grief. It becomes a part of you. There is healing in the ritual of hunting, in being surrounded by Nature’s beauty and a woman’s love. John will tell you that the Rangers made him the man he is today. The regiment’s motto—Rangers Lead the Way—ingrained on his psyche, he knew he had to set the example. His mother and siblings, Bob’s family, other Gold Star families, other Veterans needed him. It wasn’t about him anymore; it was about God.