For the second straight year, the NRA Hunters’ Leadership Forum (HLF) website is pleased to announce that one of its contributors has earned national recognition from the Professional Outdoor Media Association (POMA). On June 19, Phil Phillips was presented with an Outstanding Achievement award at POMA’s 2019 Pinnacle Awards ceremony during its annual business conference in Wichita, Kan. Phillips won in the Newspaper/Web category for his NRAHLF.org article “Another Grizzly Mauls a Hunter as the Recovered Species’ Population Expands.” Last June, NRAHLF.org contributor Keith Crowley received recognition for an article he wrote in the conservation category and I was singled out for an article I wrote on lions.

In step with NRAHLF.org’s mission to report on the news and issues impacting the future of hunting and wildlife conservation, Phillips shared the account of Facebook friend Bob Legasa who was mauled by a grizzly bear in October while bowhunting for elk in Montana. The attack made headlines as yet another example of what happens when wildlife management decisions are based on emotions rather than wildlife science.

“Once again, the emotion-based actions of animal rights extremists have had devastating consequences,” Phillips wrote. “…The attack follows last month’s decision by Federal U.S. District Judge Dana Christensen to side with animal rights extremists and overturn the U.S. Fish and Wildlife Service’s (USFWS) decision to delist recovered grizzly bears in the Greater Yellowstone Ecosystem (GYE) from Endangered Species Act (ESA) protections, though the bears exceed carrying capacity and grizzly bear maulings are on the rise.” 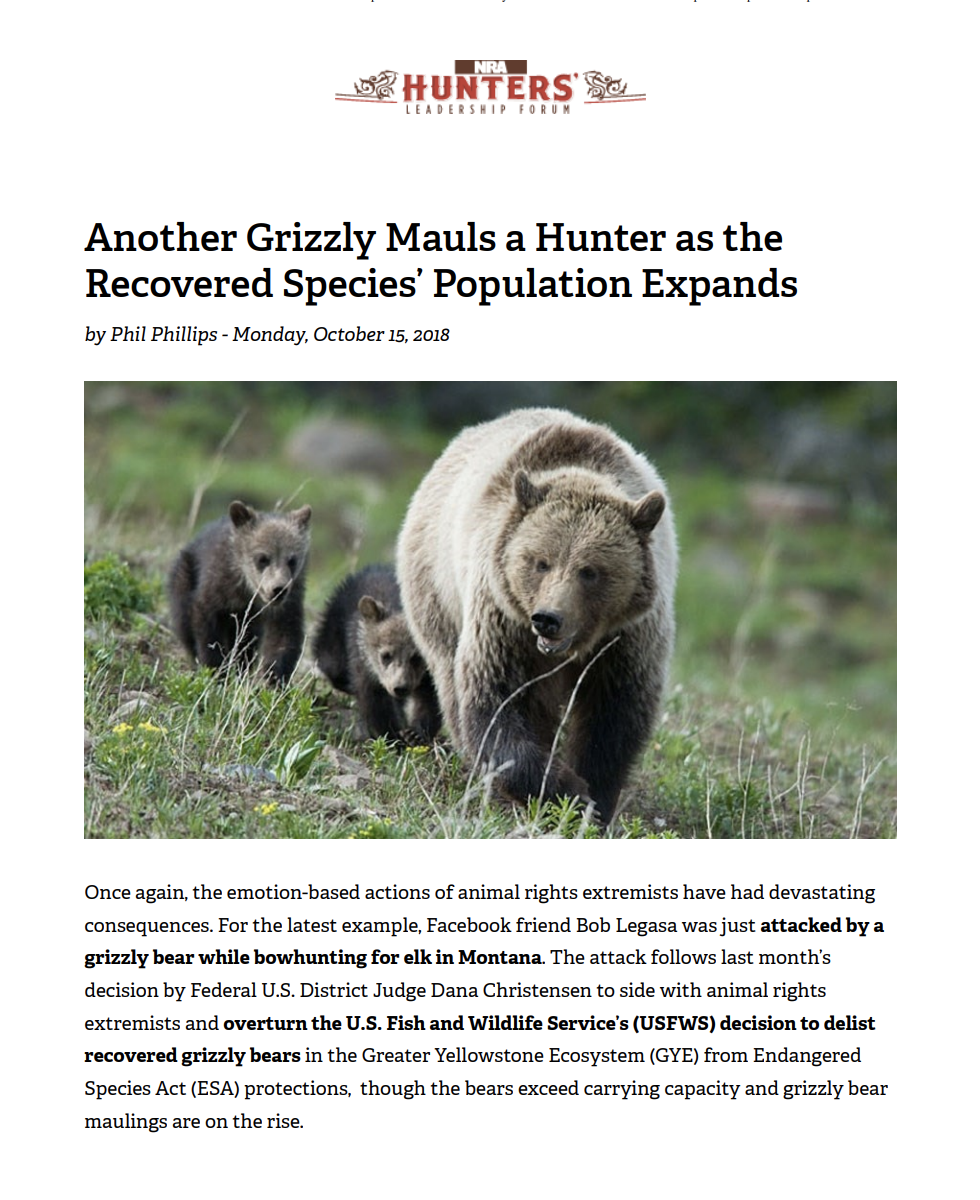 When Legasa and a friend encountered a sow and her cub on their hunt, the sow charged from 12 feet away and Legasa had no time to react. He posted his account from the Bozeman hospital where he gave thanks for his friend’s quick actions in fighting off the grizzly bear with bear spray. Phillips noted the attack occurred just three weeks after NRAHLF.org reported a hunting guide had been mauled and killed in Wyoming. He emphasized that article’s point about how wildlife managers have found that making sure predators have a healthy fear of people reduces attacks on people. “But with no hunting season, grizzly bears have nothing to fear.”

Commenting on the POMA award, Phillips said, “I am excited to be recognized in the Magazine/Web category, which had well over 100 entries from some of the top writers in the outdoor industry.” A strong voice on this website on predator issues and in support of the role of legal, regulated hunting and science-based wildlife management, he continued, “I am pleased this article was chosen because of its important safety message to make hunters aware of the dangers of being in bear country. Bear encounters only will get worse if bear populations are not soundly managed.” Giving a nod to the website, he added, “I also am happy that for the second year an award was given to a writer contributing to the NRA HLF website because it is the best place for hunters to go for the most up-to-date hunting and conservation news.”

Congratulations to All Recipients
In order for hunting to not just survive but thrive, it must master telling its many rich and varied stories. That takes talented writers, orators, photographers and video production crews. NRAHLF.org congratulates all the POMA 2019 Pinnacle Award winners and wishes them continued success in their creative fields of choice.

Thank You, Mossy Oak!
Sponsored by Mossy Oak—maker of Overwatch, the NRA’s official new camouflage pattern unveiled in January—POMA Pinnacle Awards honor journalists for excellence in traditional outdoor sports-focused communications including writing, art/photography and broadcasting, as well as content specifically focused on wildlife conservation. The awards were presented by Kevin Tate, a past POMA president and vice president of media productions for Mossy Oak, who noted his company appreciates the outdoor writing community’s efforts to foster our outdoor heritage and is proud to have been the presenting partner since the Pinnacle Award program’s inception.

About NRAHLF.org
Unique in the realm of hunting websites, NRAHLF.org was launched in 2016 as a tool for hunters to remain aware of the issues impacting hunting’s future on the state, national and international levels. Material exposes the lies of animal rights extremists who push emotion over science-based facts and explains why hunters are America’s leading conservationists as hunters’ dollars overwhelmingly lead the charge in funding and securing wildlife conservation and habitat enhancement programs into the future.