A recent paper published by a group of people ostensibly involved in the wildlife sciences highlights the clear threat animal rights thinking represents to the North American Model of Wildlife Conservation—a threat that extends to hunting’s very important place within that model. The paper, published in Conservation Letters and prepared by researchers at Oregon State University, attacks what the authors term “trophy hunting.”

According to a press release concerning the paper, “the researchers label the practice [of trophy hunting] as morally inappropriate and say alternative strategies such as ecotourism should be fully explored and ruled out before trophy hunting is broadly endorsed.”

Perhaps they did not see the research documenting the benefits of legal, regulated hunting—trophy hunting or otherwise—as reported by the International Union for Conservation of Nature (IUCN) in April 2016. As covered by this website, the IUCN issued a paper titled "Informing Decisions on Trophy Hunting" prepared for the European Parliament to show trophy hunting's indisputable positive impacts on conservation and animal welfare as decision-makers attempted to restrict the importation of all hunting trophies into the European Union (EU). The paper noted that trophy hunting is the most effective way to save wildlife populations, particularly those in decline. It advised the EU to ensure any decisions restricting or ending trophy hunting were based on an analysis of trophy hunting's role in affected communities and are made only if other alternatives can deliver equal or greater conservation incentives.

Yet the lead author of the OSU paper, Chelsea Batavia, a Ph.D. student in OSU’s College of Forestry, wrote, "Trophies are body parts. But when I read the literature, I don't see researchers talking about them like that. Nobody's even flinching."

So the paper goes on to describe trophy hunting as some grizzly activity where hunters collect “body parts” in an almost cannibalistic way. The emotional use of words and phrasing in the paper clearly tries to equate animals with people, and game animals as victims of sadistic hunters. Trophy hunters are portrayed as a bunch of camo-wearing versions of Hannibal Lecter, the psychotic serial killer from the book and movie "The Silence of the Lambs."

Actually, much of the paper sounds like it was written by someone at People for the Ethical Treatment of Animals as it is so blatantly anti-hunting—and just plain factually incorrect. The truly scary part is the paper was written by people with a very good chance of working for agencies and programs that oversee our wildlife and wildlife management at the state and federal levels. 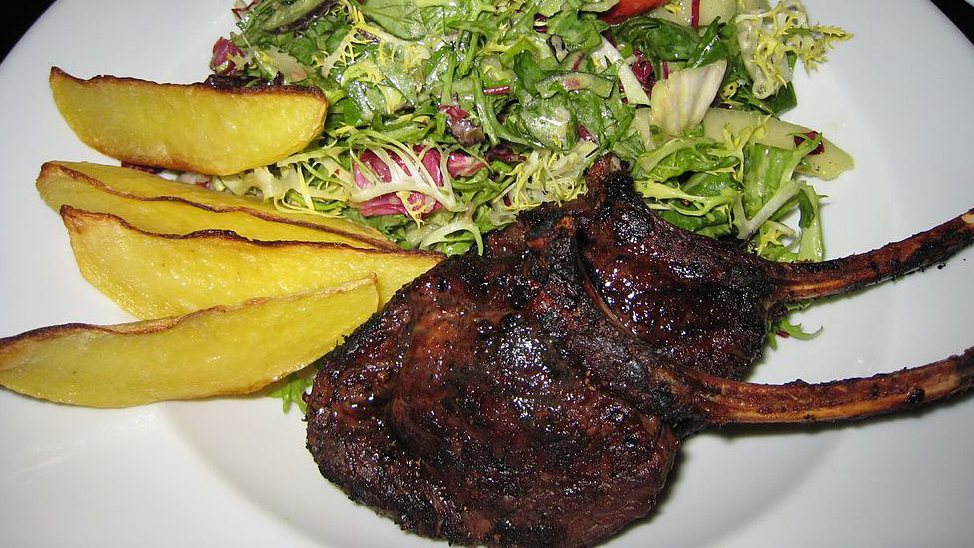 No law-abiding, ethical hunter would leave the meat of his or her kill behind. These elk rib chops were grilled over a wood fire and served with roasted Yukon gold potatoes and a salad with Persian melon, red Anjou pears and fresh figs. (Image by Neeta Lind.)

It is true, for example, that the hunter who harvests a trophy-quality elk will indeed remove and take the antlers. But the paper suggests this same hunter will then discard the rest of the animal on some mountainside. That is extremely untrue—and not just because there are game laws in this country against wanton waste.

Even the hunter who is after the monster elk of a lifetime takes home the meat. Again, the hunter is required to do so legally; game regulations are very specific in stating that wasting the meat from game animals is a crime. Ethically speaking, hunters as a group would use the game meat anyway, regardless of which animal they take, as it is a great source of organic protein to share with family and friends. A growing number of hunters also donate game meat to food banks to help the less fortunate through NRA-backed Hunters for the Hungry programs in every state across America.

Nearly 20 years ago, the Wildlife Society Bulletin published an article titled “On the Destiny of Deer Camps and Duck Blinds: The Rise of the Animal Rights Movement and the Future of Wildlife Conservation.” The future of hunting and conservation, the article’s two authors made clear, was in danger if animal rights thinking gained a strong following in American society. The consequences of such thinking, the authors explained, could very well be the death of wildlife conservation.

Just a far-out prediction from the past? The Wildlife Society (TWS) doesn’t think so.

Representing over 10,000 wildlife scientists and professionals, TWS was concerned enough about the animal rights influence on conservation that it published, “Standing Position: Animal Rights Philosophy and Wildlife Conservation,” just two years ago.

The TWS position paper didn’t mince words. “The conflict between many tenets of animal rights philosophy and wildlife management and conservation philosophy is profound,” it noted. “Established principles and techniques of wildlife population management, both lethal practices such as regulated hunting and trapping, and nonlethal techniques…are dismissed in the animal rights viewpoint.”

The paper continued, “The Public Trust Doctrine, the foundation of many laws protecting wildlife in the U.S., is based on the premise that wild animals are a public resource to be held in trust by the government for the benefit of all citizens. Animal rights advocates philosophically oppose this concept of wildlife as property held as a public trust resource, and further advocate affording legal rights to all animals.”

As reported regularly on this website, the North American Model of Wildlife Conservation recognizes the scientific and societal benefits of wildlife management in general and hunting in particular. However, the animal rights approach to wildlife presented in the Conservation Letters paper—and its very negative ramifications for our nation’s wildlife—should be of concern to all Americans, whether they hunt or not.

About the Author:
Brian McCombie is a field editor and editorial contributor for the NRA's American Hunter. He writes about firearms and gear for the NRA's Shooting Illustrated website, as well handling public relations and marketing for companies and manufacturers in the shooting sports industry. He is a member of the National Rifle Association and the National Shooting Sports Foundation. Brian likes hunting hogs, shooting 1911s chambered in 10 mm and .45 ACP, watching the Chicago Bears and relaxing with Squinchy, the orange tabby cat.