On Sept. 6 a wild Michigan wolf was captured and transplanted from the state’s mainland to Isle Royale National Park (IRNP) in the state’s Upper Peninsula in ongoing efforts to manage the park’s expanding moose population. The isolated park, which consists of a main landmass (45 miles long and 9 miles wide) and 450 surrounding islands, is now in its second year of a three-to-five-year effort to establish a population of 20 to 30 wolves following a June 2018 decision to begin restoring predation.

According to an IRNP press release on Sept. 7, “The 70-pound male wolf, between 2-3 years old, was captured in the Upper Peninsula and transported by amphibious aircraft to the island and released.” It joins 14 other wolves—12 that were translocated last fall and winter and two resident wolves—including eight males and seven females. One of IRNP’s project goals, it explains, is to “source new wolves from diverse geographic areas to ensure genetic diversity.”

As the Detroit News reported, “The wolf that was flown by seaplane [to IRNP] joins 14 others already on Isle Royale and officials hope to ultimately bring as many as 30 new wolves to the island that’s been overrun by more than 2,000 moose. Officials hope the new predators will be able to reduce the number of the leaf-eating moose before the moose eat their way through the island located about 60 miles northwest of the Upper Peninsula.”

Well, you might ask, “If IRNP has such a problem with moose, why not launch a hunt?”

At least two issues currently block a hunt, the first being that IRNP is not on the list of national parks that currently allow hunting. Second, according to an article posted on the website of the environmental organization Great Lakes Echo, long-standing treaties with Native American tribes come into play.

“From the Treaties of 1842 and 1854, the Keweenaw Bay Indian Community has hunting, fishing, and gathering rights in certain areas of [Michigan’s Upper Peninsula], including Isle Royale,” the article notes. “This would give them the final decision on the hunting of moose on the island… .” 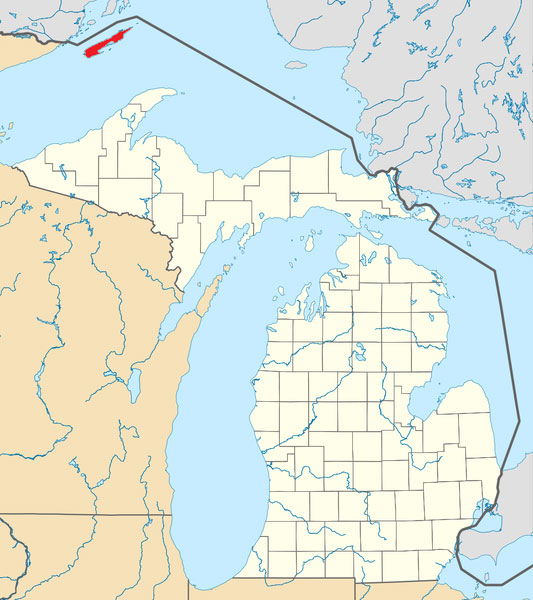 Isle Royale is highlighted in red and the entire island is part of the National Park Service.

Those who oppose an Isle Royale moose hunt also argue that there are practical problems to making a hunt work. The Great Lakes Echo article summed up this point:  “[T]he logistics of moving an animal [hunted moose] once it’s killed make the plan seem less feasible… . Outside of the main harbor, the island is pure wilderness with only small trails, and with vehicles banned, hunters would have to carry their kill out of the woods.”

As the IRNP website itself reveals, camping is allowed at the park, and while motorized vehicles are not permitted, there are exceptions for “bicycles, tricycles and similar devices” on “authorized roads.”

With a little creativity and some adjustment to park regulations, it would seem a hunt could be held, especially given the over-abundance of moose on Isle Royale itself and the environmental damage these large cervids appear to be doing. As reported on this website in the past, a report issued by the National Park Service in 2016 lauded using American hunters rather than paid sharpshooters, calling them “ideal citizen wildlife managers” for national park game-culling operations.

And hunters are a hearty breed. A wilderness moose hunt—potentially for trophy-sized animals? Many hunters would pay a good deal of money for that experience, and some of this money could go to the park itself versus having it spend tens of thousands of taxpayer dollars on wolf relocations.

But, that’s just a thought from hunters.