The Atlantic Gets It Right: Save Moose by Hunting More

On Oct. 17, 2018, Science Daily reported on a study published in the Canadian Journal of Zoology that concluded the unprecedented 70-percent death rate of moose calves over a three-year period was due to an infestation of moose ticks. Normally, a cold, snowy winter is enough to suppress the moose tick numbers, but the study concluded that because five of the 10 prior winters were late in arriving and brought scant snow cover, it was all climate change’s fault. The very next day, The New York Times ran a piece entitled “47,000 Ticks on a Moose, and That’s Just Average. Blame Climate Change.” At least in this piece the moose’s own recovery success was included as a contributing factor to the problem. Neither article mentioned hunting, never mind exploring it as means of ameliorating moose overpopulation.

Four months later The Atlantic published an in-depth investigation that—mostly—got it right. Despite its hyperbolic title, “Climate Change Enters Its Blood-Sucking Phase,” the author was forced to admit and defend that increasing hunting on northern New England’s moose population was the only way to save it from catastrophic loss. Winter temperatures and precipitation levels could not be controlled, but how many moose live in each square mile? That, most definitely, could be controlled.

Author David Dobbs accompanied two Vermont biologists as they conducted a necropsy on a fallen moose calf. When a GPS collar is no longer transmitting movement, scientists know that the calf either freed itself from the tracking device or died. The author asks what a healthy 10-month old calf should weigh. The answer is in the neighborhood of 400 pounds. This one weighed 270. Parting the fur between the shoulder blades, one biologist exposes not skin, but a swarth of ticks. Using a metal ruler, he calls out a tick count per square centimeter to his co-worker recording the numbers and how many of the ticks are engorged. The biologists estimate that the calf had been host to around 14,000 ticks. Although not a high number by comparison, the infestation would have caused chronic anemia from January through March and then acute—and fatal—anemia for the final weeks of the calf’s life in early April. 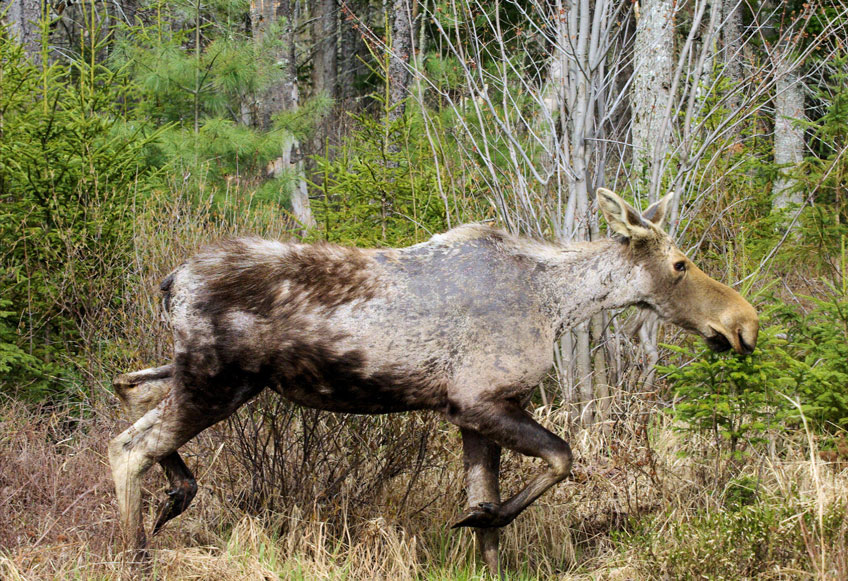 When a moose is infested with ticks, it rubs off its fur to scrape off the parasites, which leaves its skin exposed to the cold, further weakening the animal. (Image by Dan Bergeron, New Hampshire Fish and Game.)

When first settled, northern New England was 80 percent forested, but by the mid-1800s that forestation level had dropped to less than 25 percent. As people and animals moved westward, New England reforested, reaching 85 percent by the 1990s. The returning habitat attracted once-native animals back to New England, including birds of prey, beaver, bear, bobcat—and moose. It quickly became apparent that with no predators and abundant greenery that the moose population needed to be kept in check. Maine began allowing legal, regulated hunts in 1980, New Hampshire in 1988 and Vermont in 1993. By the mid-2000s those three states together tallied 1,000 moose-car collisions a year—crashes that killed people.

Female moose can weigh up to 800 pounds, males 1,100 pounds with some reaching 1,700. Surprisingly athletic, moose can run as fast as 35 miles an hour—in deep snow. They can swim approximately 6 miles per hour—for up to two hours. They can leap over cars. However, they cannot survive being bled to death. The species naturally avoids ticks by living in more northern climes. Unlike deer, which groom each other, moose are not habitual groomers, only grooming themselves and only when heavily infested. Moose ticks are not new to the moose. Alces alces can withstand hundreds of bloodsuckers, but not tens of thousands.

As moose browse for vegetation, they exhale carbon dioxide, which causes clusters of ticks congregated on trees, shrubs and tall grasses, to reach out in unison. One will grab onto a strand of moose fur and the rest, linked to each other, will swing onto the mammal in chains. Once aboard, they spread out, burrow and begin feeding off their host. Calves are especially susceptible because of their smaller height. Moose ticks hang out on plantings 4 to 6 feet above the ground. Calves are also less resilient than adults to the physical stresses the ticks cause. Moose will scrape their fur off in an effort to dislodge the ticks, but that only exposes their skin to the cold, weakening them further. Eventually, the female ticks completely engorge themselves in preparation for falling off the moose and laying their eggs. It’s during this time when the chronic anemia the moose is suffering from becomes acute. The final female feeding can extract as much as a third of a calf’s blood. Eventually, the moose succumbs.

Alberta, Canada, Haunted by Ghost Moose
In this video, National Geographic explores how moose ticks hitch rides on moose north of the border and how the pale victims stagger along until they are bled to death.

When the female ticks drop to the leaf cover in spring, they lay their seed ticks, which feed off the female’s final blood draw throughout the summer. The ticks are normally hit hard by a cold and snowy early winter, the norm in northern New England. If winter is delayed and snowfall is minimal, though, the ticks survive and await a passing moose to latch onto for the winter, which is called questing. Warm or late winters mean more ticks survive and an overabundant moose population means those ticks will have plenty of hosts to choose from, further increasing their numbers.

The study revealed that the 2013-2014 and 2015-2016 winters saw 50 percent of collared calves killed. Mortality rose to 80 percent the following winter. But it wasn’t just the calves that were in jeopardy. The average weight of adult female moose from 2005 to 2015 in Vermont, for example, dropped from 575 to 525. Subsequently, their ovulation level lowered and they carried fewer calves to term, so there were fewer calves to start with in the Green Mountain State. A cold winter was needed to break the cycle, and 2016-2017 delivered. Snows started flying in October and the following spring calf mortality dropped to 30 percent. However, it was followed by another 50-plus-percent mortality year. In Vermont, that made six out of the last 11 winters “tick epizootic events,” or banner years for ticks.

It became clear that density needed to be lowered or the holes being created in the age structure would leave even fewer moose of prime reproductive age. If that trend continued, the moose would become increasingly older, less fertile and less resilient. Scientists know that the ideal density for moose is .75 to 1 moose per square mile. That density rate allows for room to spread out and plenty to eat.

The article’s author explores the position of allowing the ticks to cull the herd naturally. But in addition to not solving the growing age-structure issue, how humane is it for calves to suffer long, grueling deaths, sometimes eaten alive by coyotes because they no longer have the energy to take another step?

It is ironic that those who lead conservation organizations, such as Walter Medwid, a founding member of the Vermont Wildlife Coalition, who was quoted in the article, cannot wrap their minds around the counter-intuitive necessity of lowering density to manage a healthier herd. On the face, it would seem that hunting a species that is struggling would only intensify the pressure it is under, when the reality is exactly the opposite. With more room, the moose will have more to browse, they will be stronger and more able to survive moose tick infestations. There also will be fewer moose for the ticks to feed on. The Atlantic did its homework in this case and reported fairly.