NRA 2019: Another Year of Working for American Hunters

For nearly 150 years, standing up for American hunters and legal, regulated hunting has been one of the National Rifle Association of America’s core objectives. So as this NRA Hunters’ Leadership Forum (HLF) website monitored and reported on the news impacting the future of hunters and hunting in 2019, it was no surprise that our lineup was filled with stories touting NRA victories and ongoing efforts on behalf of every American hunter—NRA members and non-members alike. 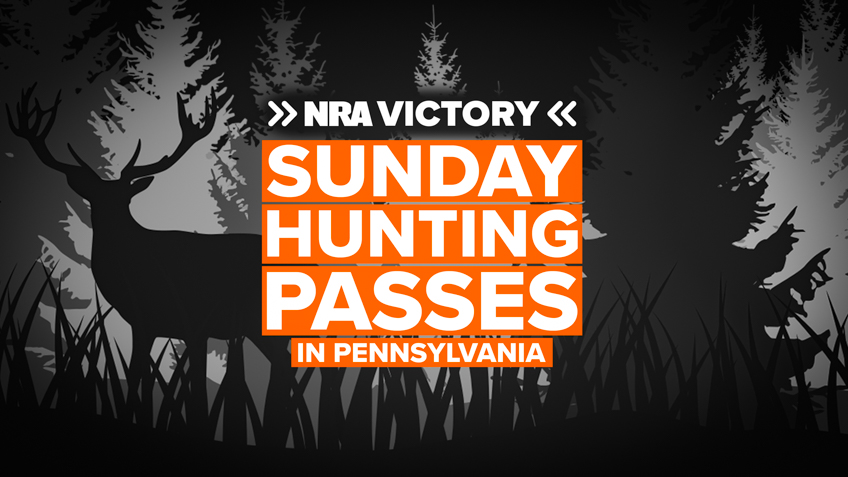 1. NRA Pivotal in Cracking Pennsylvania’s Sunday Hunting Ban
Thanks to the NRA Institute for Legislative Action (NRA-ILA), on Nov. 27 NRAHLF.org reported that Pennsylvania Gov. Tom Wolf signed Senate Bill 147 into law, permitting hunting on three Sundays statewide. “Today is a huge win for sportsmen and women in Pennsylvania,” said NRA-ILA Executive Director Jason Ouimet. “For the first time in centuries, hunters will have the freedom to hunt on Sunday—and any other day of the week that works for them and their families. I thank the Pennsylvania House and Senate for passing this historic legislation.”

NRA-ILA has worked for decades to repeal blue laws prohibiting hunting on Sundays. “This is a historic event,” said NRA-ILA Director of Hunting Policy Erica Rhoad. “To think that after over 300 years we’re finally throwing off a holdover of British colonial rule—it’s monumental. And there’s nothing to say that you can’t do both, go hunting and go to church, on any given Sunday.” 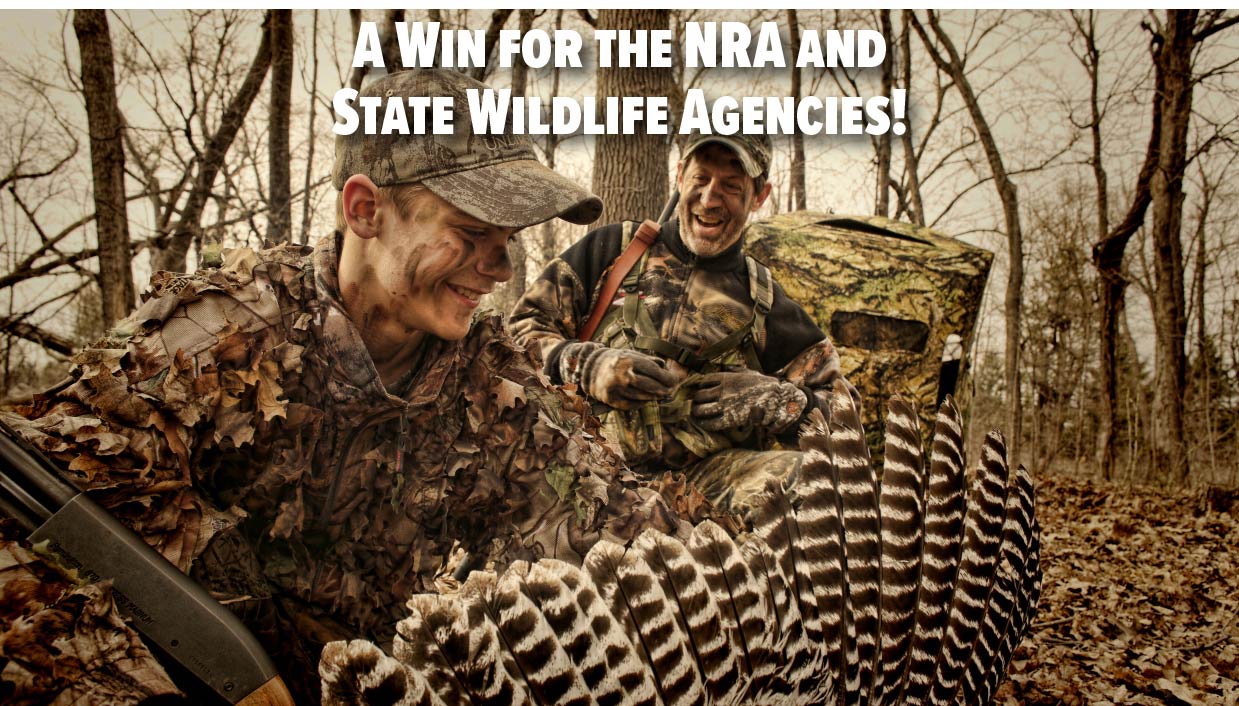 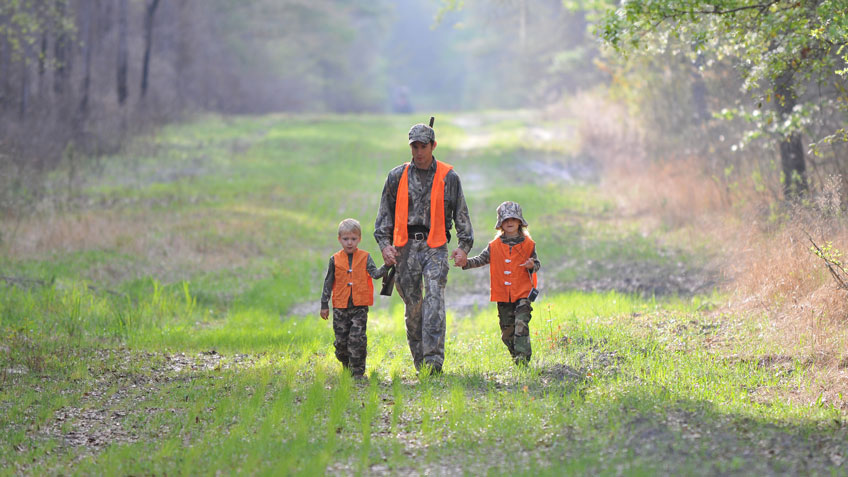 3. Florida Reaps $70,000 for Conservation by Using Free NRA Course
The NRA made more news in November as Florida became the first state to take advantage of the above USFWS policy to use the NRA’s free online hunter education course to claim matching P-R funds. The Florida Fish and Wildlife Conservation Commission announced it may access up to $70,000 for wildlife conservation efforts based on the number of Florida residents who take the online NRA course, which has an open-market value of $14 to $30 per person. Florida, by the way, was also the first state to adopt the NRA’s free online hunter education course in 2017. 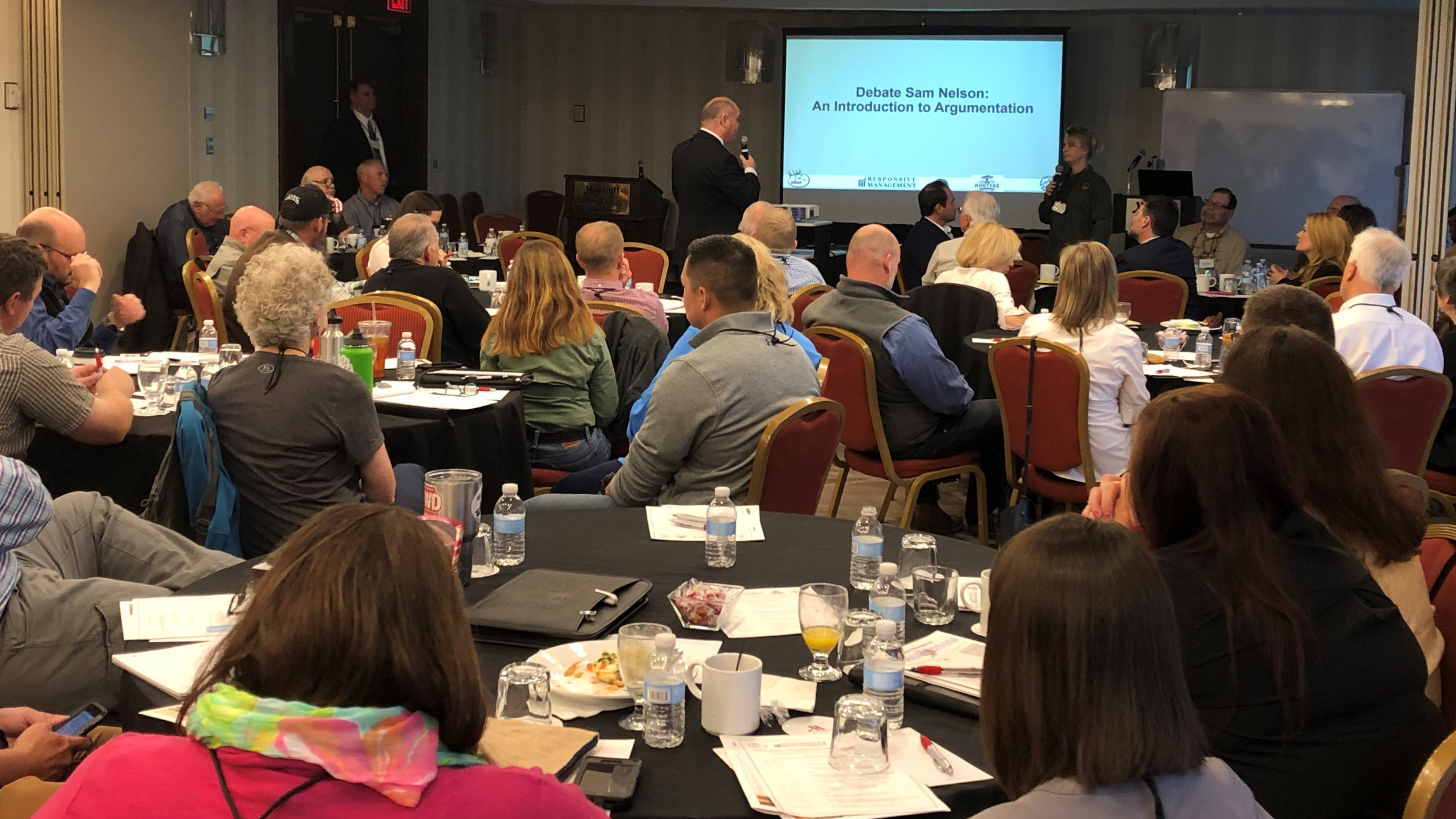 4. Workshop Teaches How to Successfully Debate Hunting
Invested in protecting hunting’s future, the NRA has conducted considerable research in recent years on public attitudes toward hunters, hunting and animal welfare. But while the hunting community has scientific facts on wildlife management on its side, too often we hunters cannot score points when debating the merits of legal, regulated hunting because we do not have the strategic thinking and communications skills to win it. On May 15, the Rocky Mountain Elk Foundation (RMEF) and the outdoor recreation survey and research firm Responsive Management (RM), in partnership with the NRA HLF, held an inaugural “How to Debate and Communicate Effectively about Hunting” workshop near NRA headquarters in Virginia. The sold-out event drew nearly 100 people from state fish and wildlife agencies and non-governmental hunter-backed organizations. The goal: to institutionalize the right way forward by teaching pro-hunting audiences to use winning debate tactics to seize the narrative, communicate hunting’s benefits and build long-term support. 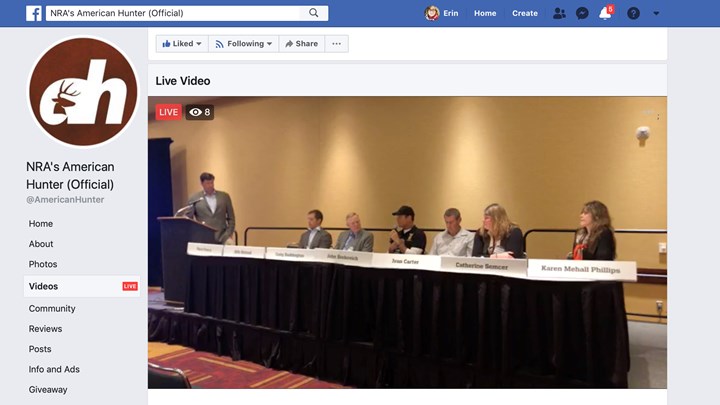 5. Global Anti-Poaching Experts Speak at NRA Show in Indy
This year’s NRA Annual Meetings and Exhibits in Indianapolis featured the inaugural NRAHLF.org seminar “Fighting Poaching: How the Hunting Community Can Stem the Tide.” Co-moderated by NRA HLF co-chair Ward “Trig” French and myself, the event pulled together experts in the global war on poaching including internationally known wildlife conservationists and outdoor TV hosts Col. Craig Boddington (USMC Reserves, Ret.) and Ivan Carter and NRAHLF.org contributor Catherine Semcer. As touted by this website following the event, a welcome surprise to the lineup was Kathi Lynn Austin, founder of the Conflict Awareness Project and an arms trafficking expert who explained how stopping the illegal arms trade is the most direct route to stopping poaching. As noted by French, the intent, in part, was to have the audience “recognize the complexity of the problem, the inability to apply a fix-all solution and the hunting community’s obligation to apply all available methods to stem the scourge of poaching.” 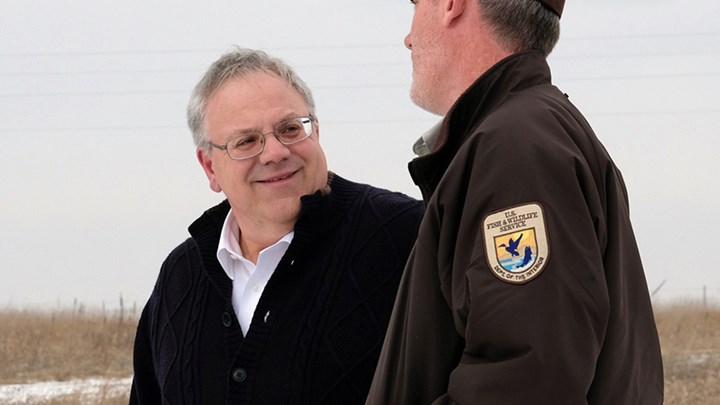 Image by Tami Heilemann, Department of the Interior.

6. Senate Confirms Bernhardt as Secretary of the Interior
Marking another win for American sportsmen, in a move applauded by the NRA, the U.S. Senate voted in April to confirm lifelong hunter and angler David Bernhardt as Secretary of The Interior (SOI). Committed to continuing the conservation efforts of the Trump administration started under former Department of The Interior Secretary Ryan Zinke, Bernhardt celebrated the successful recovery of the gray wolf and began the delisting process so that the Endangered Species Act could be used as intended. As reported by this website, Bernhardt also released funding for numerous state grants to improve migration routes and habitat ranges for Western big game species in the ongoing effort of the DOI to work more in concert with states and volunteer private landowners.

NRA-ILA’s Erica Rhoad had the honor of introducing Bernhardt as the keynote speaker for the annual NRA HLF dinner at the NRA Annual Meetings and Exhibits in May. After thanking the NRA for everything it does to protect our collective freedoms, Bernhardt emphasized to the crowd, “Without you, we would not have lands managed by the Department of The Interior.” 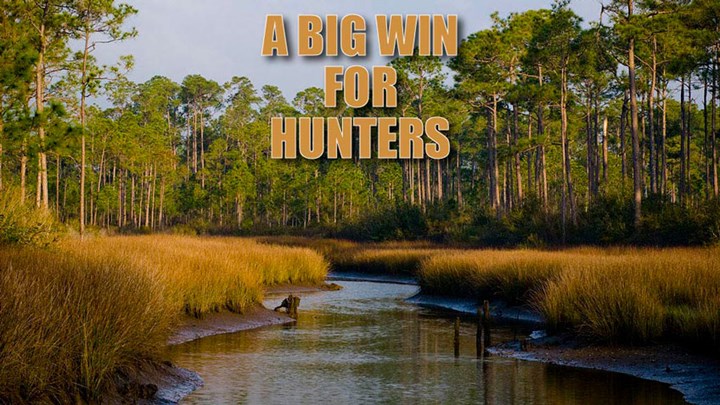 7. USFWS Opens 1.4 Million Acres to Hunting and Fishing
Thanks in no small part to the numerous comments received from the nation’s hunters and NRA members, in September the U.S Fish and Wildlife Service (USFWS) announced it was expanding hunting and fishing opportunities at 77 National Wildlife Refuges and 15 National Fish Hatcheries, accounting for 1.4 million additional acres being opened to sportsmen, marking what SOI Bernhardt said was “the largest single effort to expand hunting and fishing access in years.” The NRA and its membership supported and promoted this push for expansion as NRAHLF.org continued to track the USFWS’s progress. Bernhardt essentially doubled the federal acreage made available to sportsmen over the past five years combined. 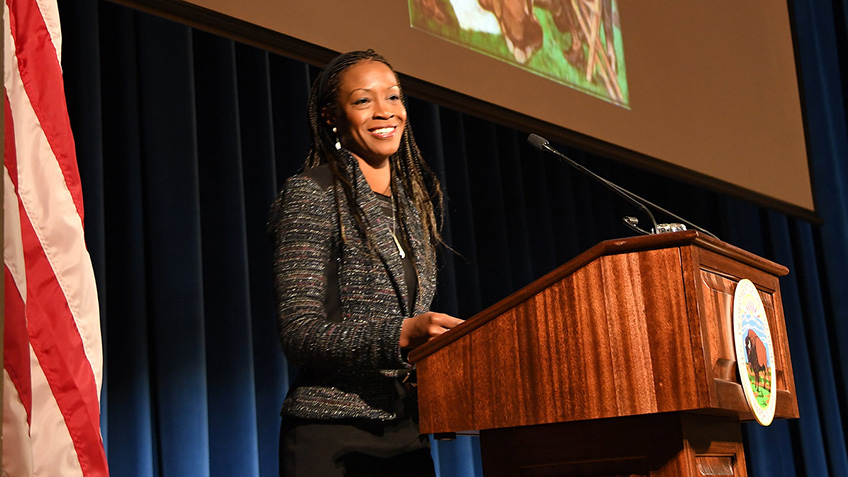 Image courtesy of the U.S. Department of the Interior.

8. Trump Taps First African American to Lead USFWS
On Dec. 12, the NRA applauded the confirmation of Aurelia Skipwith as Director of the DOI’s USFWS, fostering the Trump administration’s commitment to science-based wildlife management. Contributing a letter of support for Skipwith’s nomination, NRA-ILA recognized her staunch commitment to the North American Model of Wildlife Conservation.

“Today, the U.S. Senate voted to confirm Aurelia Skipwith as the next director of the U.S. Fish and Wildlife Service,” said Jason Ouimet, executive director of NRA-ILA. “The NRA is extremely grateful for Senate Majority Leader McConnell’s support throughout the confirmation process. Aurelia is dedicated to conserving wildlife and protecting America’s great hunting heritage. On behalf of NRA members across the country, I thank President Trump for this important nomination and look forward to working with Director Skipwith.” 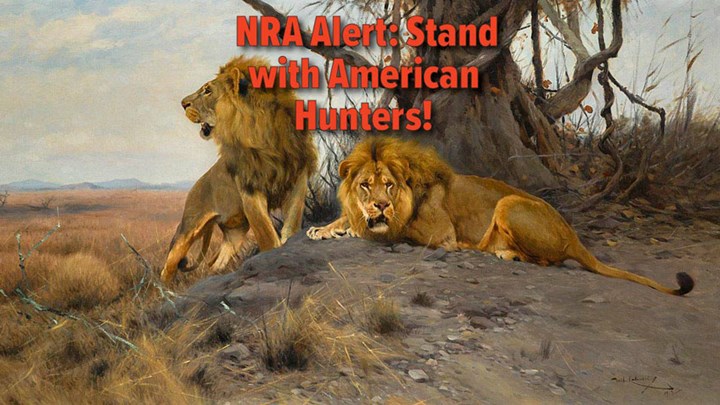 9. NRA Pushes for a “NO” Vote on CECIL Act
The Endangered Species Act (ESA) of 1973 has long been used by animal rights extremists to try and shut down hunting, using manipulation and litigation to get species added to the list of those that truly are imperiled and in need of ESA protections. As NRAHLF.org reported in April and again in August, their latest attempt to sidestep scientific facts was the reintroduction of the Conserving Ecosystems by Ceasing the Importation of Large (CECIL) Animal Trophies Act, or CECIL Act (H.R. 2245), aiming to end hunting outside U.S. borders and create a science-free ESA. If passed, the bill would end hunting and the flow of hunters’ dollars outside our nation’s borders and lead to declining populations of numerous African wildlife species. NRA-ILA respectfully urged legislators to stand with hunters, do the right thing and vote “NO.” The international importation of sport-hunted wildlife is already heavily regulated by U.S. laws, regulations and international treaty. Stay tuned to NRAHLF.org and NRAILA.org for updates and the latest news as NRA-ILA works on behalf of hunters on the state, national and international levels. 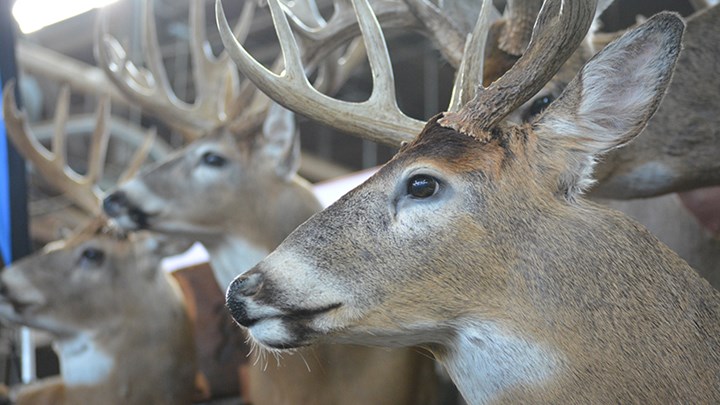 10. Of course, the 2019 NRAHLF.org lineup included material exposing the dishonesty that animal rights extremists work into every conversation about mainstream American hunters and legal, regulated hunting and touted general interest stories sharing the truth about hunting. Topics included how there is no difference between trophy hunting and hunting as what constitutes a trophy depends on the individual, and the meat is eaten either way; how animals still die when hunting is banned; and how national studies show that the injury rate for hunters is below that of almost every other sport from golfing to hiking. As NRAHLF.org works to reclaim the narrative on hunters, hunting and animal welfare, sharing our story is the only way non-hunters will learn and understand why we hunt.

Our collective response: Be proud of our mainstream hunting traditions. Share NRAHLF.org story links on our respective social media platforms.