“My feet have taken me to a lot of amazing places where I’ve met a lot of great people,” declared the avid marathon runner and newly-minted director of the U.S. Fish and Wildlife Service (USFWS), Aurelia Skipwith. Her ability to stay the course paid off today when after an interminably long wait, the full U.S. Senate voted to approve her re-nomination to the position, 52 to 39. In April 2017, Skipwith was appointed deputy assistant secretary for Fish, Wildlife and Parks within the Department of the Interior (DOI) where she oversaw policy and prioritized public access for hunting and fishing in national wildlife refuges. In July 2019, President Donald J. Trump re-nominated Skipwith for the directorship. She is committed to following through on the goals this administration has laid out for common-sense management of wildlife and habitat while balancing the interests of all parties at the table based on the best available science and the rule of law rather than politics and bureaucracy.

Skipwith’s education and experience positions her well for this pivotal governmental role. She earned her Bachelor of Science from Howard University, her Master of Science in molecular biology from Purdue University and a Juris Doctor from University of Kentucky School of Law. Skipwith was raised in Indianapolis, Ind., spent a lot of time in Saint Louis, Mo., and of note to hunters and wildlife conservationists everywhere, passed summers with her grandparents in Columbus, Miss. “If we didn’t grow it, catch it or kill it, we didn’t eat it,” Skipwith recalled. Her grandfather especially emphasized work done by hand, which Skipwith continues to value today. One of the favorite parts of her job is getting in the field and visiting refuges and other public lands in order to see firsthand the projects underway and to talk with all stakeholders to understand their perspectives. 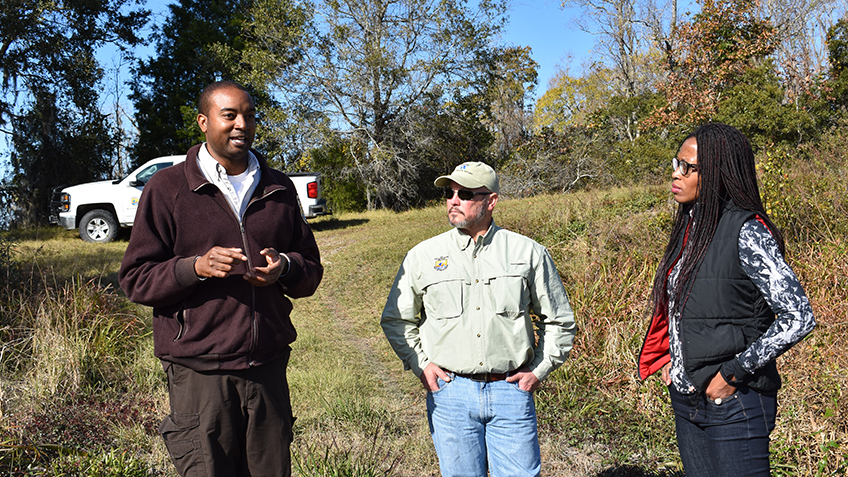 Aurelia Skipwith delivered the keynote address at the 30th anniversary of the Ace Basin Task Force, which focuses on conservation efforts in South Carolina's Lowcountry. She took the time to tour the Ace Basic National Wildlife Refuge and to discuss recent storm damage. (Image Courtesy of the USFWS.)

In reading the countless letters of support for Skipwith’s nomination, including from the National Rifle Association’s (NRA) Institute for Legislative Action (ILA), some sentiments about the nominee came up repeatedly. Words like “professional,” “reasonable,” “positive,” and “dynamic” were often used while relating that they found Skipwith to be a critical thinker who listened to all sides and applied science-based, common-sense solutions to complex issues on the ground. But it is her unwavering commitment to the North American Model of Wildlife Conservation that cemented her support from nearly every major hunting and wildlife organization in the country, including the NRA, Safari Club International, Houston Safari Club, Sportsmen’s Alliance, National Shooting Sports Foundation, Archery Trade Association, Boone and Crockett Club, Congressional Sportsmen Foundation, Council to Advance Hunting and the Shooting Sports, Ducks Unlimited, Mule Deer Foundation, National Wild Turkey Federation, Pheasants Forever, Quality Deer Management Association, Rocky Mountain Elk Foundation and others.

“Today, the U.S. Senate voted to confirm Aurelia Skipwith as the next director of the U.S. Fish and Wildlife Service,” said Jason Ouimet, executive director of NRA-ILA. “The NRA is extremely grateful for Senate Majority Leader McConnell’s support throughout the confirmation process. Aurelia is dedicated to conserving wildlife and protecting America’s great hunting heritage. On behalf of NRA members across the country, I thank President Trump for this important nomination and look forward to working with Director Skipwith.”

Interestingly enough, though, Skipwith’s approval did not just come from one segment of those who care about public lands and wildlife management. Current and former U.S. senators and representatives vouched for her. The National Association of Biomedical Research noted Skipwith’s even-handedness. Numerous farm bureaus, all representing thousands of farmers and billions in economic impact, all endorsed Skipwith. Various county and state departments backed her, even those who did not get what they wanted from her, but appreciated that Skipwith guided them in ensuring their concerns were heard against competing interests. 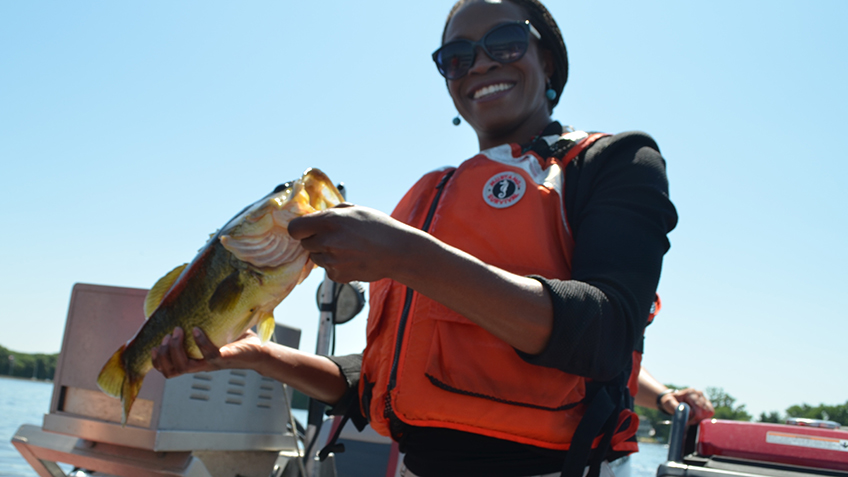 The new director of the USFWS, Aurelia Skipwith, is no stranger to outdoor pursuits. She spent childhood summers with her grandparents living off the harvests of gardening, fishing and hunting. (Image courtesy of Aurelia Skipwith.)

Electric supply companies, including the National Tribal Energy Association, favored Skipwith because she applied that balanced perspective of providing power for people while simultaneously preserving habitat for animals. The National Sheriffs’ Association and the National Fraternal Order of Police noted Skipwith’s respect for and ability to work with law enforcement officers within her department and in surrounding locales. Organizations like The Memorial Foundation, Alveda King Ministries and Urban American Outdoors all expressed excitement about the first African American being tapped to head the USFWS and her emphasis on preserving African American history and getting more minorities involved in traditional outdoor activities. They also praised President Trump for the nomination. Numerous livestock industry organizations pointed out that it is they who are often at the heart of wildlife and habitat restoration efforts since migration paths may cut through their lands and apex predators prey upon their livestock. They reiterated the need for creative solutions for conflicting interests and highlighted Skipwith’s fairness in partnering with them. The forest products industry expressed similar sentiments.

While support has been strong from those marginalized in the last administration, the left found fault with Skipwith’s past work experience. She began her career with Monsanto, a company that provides agricultural products for farmers worldwide and the makers of Roundup, a potent herbicide that controls unwanted plants and weeds. Skipwith began there as a lab technician in 2006 and had worked her way up to a managerial position in sustainable agriculture partnerships by the time she left in 2012. She was a research and legal intern at the U.S. Department of Agriculture, and then she worked for the United States Agency for International Development as an intellectual property consultant. Next, she worked for Alltech, which provides all-natural animal nutrition worldwide and operates the world’s largest algae production system. She then became general counsel at AVC Global, an agricultural logistics and financing firm that she co-founded. 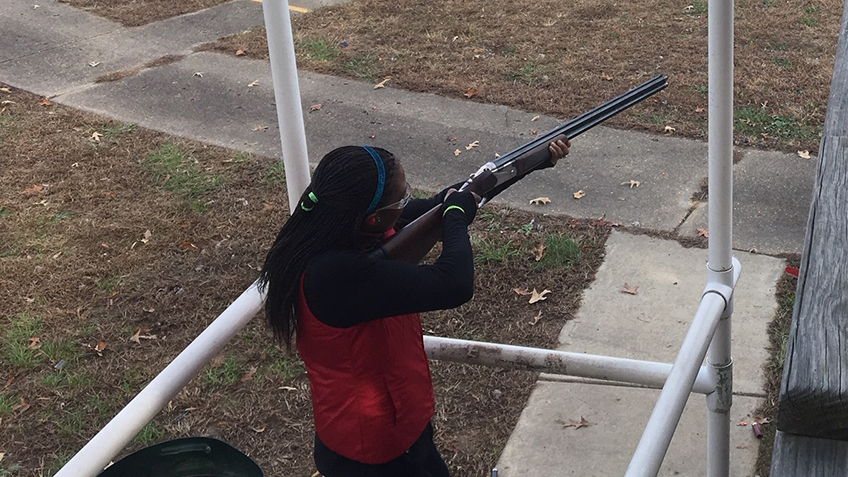 Aurelia Skipwith enjoyed widespread and strong support from countless hunting, shooting and wildlife conservation organization, most notably the NRA. Here, she steals some time at the range. (Image courtesy of Aurelia Skipwith.)

Does her career indicate that she’s incapable of understanding any other perspective than that of a farmer? Hardly, because under her leadership she has contributed to realizing the Trump administration’s balanced use of public lands and resources, resulting in responsible development. As this NRA Hunters’ Leadership Forum website has reported, in March of this year the President signed a lands bill that protects hunting access, which DOI Secretary Bernhardt put it into action through the USFWS. Then Bernhardt continued big game conservation efforts, which heavily involved the USFWS partnering with private and public landholders. And in September, 1.4 million acres of public lands were opened to hunting and fishing.