APPEARS IN News Resources for Hunters

I’m guilty of using spare minutes here and there to browse my Facebook newsfeed, especially during hunting seasons when I know my friends and followers will be posting stories and photos of recent harvests. I love to see folks succeeding and the ear-to-ear grins that accompany their accomplishments. While browsing, however, I occasionally encounter images and words that defame and misrepresent hunting. I could easily dismiss these infrequent posts as “people being people,” but why tolerate them? That it happens intermittently doesn’t make it harmless.

The fact is, such posts hurt hunting twofold. First, non-hunters often find negative or repugnant hunting-related posts repulsive. Second, there are many young people on social media who are easily influenced by what they see. In other words, what kind of hunters do we want to create for the future? Do we want respectable folks who portray our cherished tradition and lifestyle tastefully, or do we want tasteless people who disintegrate our integrity and hunting’s future? The latter is a chance we can’t take.

Certainly, social media platforms can be used to the benefit or harm of hunting’s portrayal. Yes, I see many positive posts, but I also see too much concerning content. Let’s review six social media blunders I repeatedly see hunters make that can harm hunting so that we can make sure we avoid them and encourage other hunts to do the same. 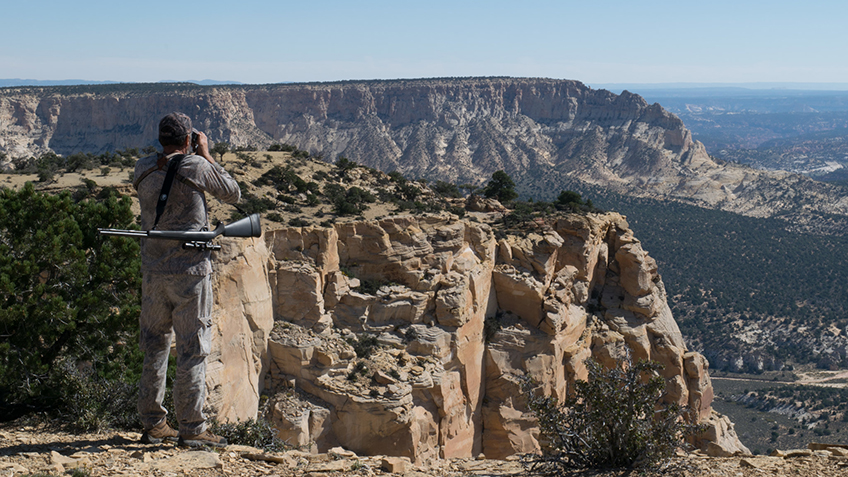 Scouting is just one of countless activities that comprises "hunting." Another way to showcase your hunting on social media is to include a scenic shot of the landscape where you hunt. (Image courtesy of the Bureau of Land Management.)

1. Using Excessive Slang Terms
People tend to get braver on social media than they do in face-to-face dialogue. They write and post things they’d never say. One example was a post I read where the hunter referenced a whitetail doe he shot by a derogatory name. Really? These wild animals are majestic in every way, and the opportunity to harvest them is a gift from God. Let’s not portray killing an animal as some macho feat. Let’s give thanks for the animal and the meat it provides.

I’ve read countless other posts with offensive language and profanity related to all things hunting—bow, firearm, animals, weather, other hunters and the like. Again, most of it could be dismissed, but why should we tolerate it? If it isn’t helping hunting, it’s likely hurting it. So, let’s resolve to stay positive and avoid needless rants. Let’s portray ourselves as the respectable bunch that we are.

2. Showing Excessive Blood
I love a dense blood trail following a well-placed shot. Don’t misinterpret my point. I love it because I know my odds to recover the animal quickly skyrocket when it’s not a hands-and-knees search. I don’t love it for some demented or otherwise bloodthirsty reason. Sure, it’s part of the kill, and the kill is certainly part of hunting, but the presence of excessive blood, be it from a blood trail or the recovered animal, should be kept to yourself, not posted for the general public to see.

Rather than showcase the gaping wound your broadhead or bullet created or the pool of blood at the recovery scene, take the steps to wash or wipe away as much blood from the animal as possible and take more tasteful photos to post on social media. You’ll catch less flack from outsiders, represent hunters much more positively and make more headway in telling the story of hunting. 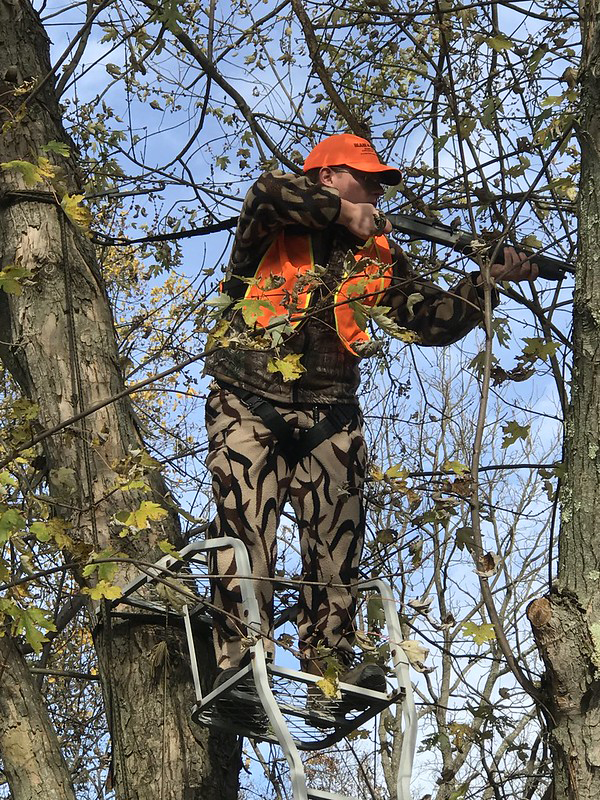 3. Sitting on Top of Your Deer in the Back of a Pickup
Think of the images of your wild game animal as lifelong memories. Do you want a picture to show your grandkids someday of you sitting on the top of your buck in a pickup bed, or do you want to show them a nicely composed image of you and your buck in a field setting? I’ll take the latter.

That goes for social media, too. Don’t be lazy and mount your deer like some horse to be ridden. Taking a deer is something to be proud of, not something to be arrogant and disrespectful about, and that may be the impression you create. Take the time and effort to set up a well-posed image. Good pictures are far more enjoyable to your audience and will gain more positive traction than redundant tailgate shots.


4. Bragging About Shot Distance
Hunters come in every make and model. That includes skill levels, too. I know hunters who are very capable of making long-range shots in challenging conditions. Unfortunately, I also know of a few who are willing to take a shot for a chance at success even if conditions are not ideal.

First of all, take shots you know you can make. If you’re skilled and take a mule deer at 500 yards with a firearm or an antelope at 60 yards with a bow, don’t publicize it on Facebook unless someone asks. Shot distance isn’t a bragging point. Plus, you don’t want to give novice or less-skilled hunters the notion that they, too, can attempt such shots.

Remember, there are many opinions out there on what constitutes ethical shot distance. Chances are you’ll get negative comments on your post along with the good ones, and then an argument is bound to happen. That’s bad static. It gives outsiders the impression that we hunters can’t get along with one another. Prevent it from happening by posting only the relevant and non-political details of your hunt. 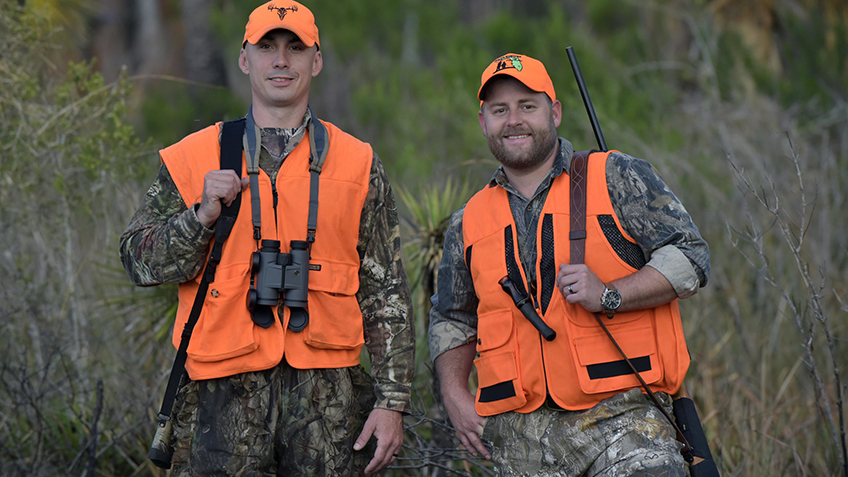 Don't forget that part of the hunting experience is the people with whom you share it. Pictures of hunting buddies tell the hunting story, too. (Image by Tim Donovan, Florida Fish and Wildlife.)

5. Showing Kill Photos Only and None of Your Hunt
It’s easy to post photos of a big buck or a mature gobbler each time we’re blessed to take one. Nothing wrong with that. You should share your accomplishments. But if you only post kill photos and don’t document the rest of your hunt or other things related to your outdoor lifestyle and the hard work it entails, prepare for accusations and ridicule at some point down the line. Instead, tell of all things related to your hunt and not merely the kill.

Photograph and post pictures of evening sunsets, non-game animals, wildflowers and the barred owl that perched on a limb near your stand. Don't forget the images of you practicing at the range, scouting, climbing your treestand, packing your gear and anything else you can think of that tells a more complete story of hunting. How about a shot of you writing in your hunting journal, if you keeo one? Think creatively. Most people like success photos, but I also believe that most want to see that you enjoy the process rather than just the kill. You’ll be more respected by your audience.

6. Publicly Slandering Others
As I said earlier, folks tend to get too big for their britches on social media. They type things they wouldn’t say to someone’s face. I’ve seen folks ridicule other hunters because they shot a “small” buck or because they shoot X-brand bow or Z-brand firearm. On occasion, slander also occurs because someone, for example, harvested an animal with a crossbow instead of a compound bow or he or she hunted with an outfitter.

It’s likely that outsiders will comment with negative garbage on posts of harvested animals. It’s good to take a strong stand for hunting, but make sure that you don’t slander someone for their views, even if they go against things in which we hunters believe. You won’t win a non-hunter over to support the hunting community via slander. Show respect and take a careful approach to explaining wildlife conservation and how hunting is a crucial component. For some points of discussion, reference Phil Phillips’ NRAHLF.org article “How Do You Spell Conservationist? H-U-N-T-E-R.”

Sarcasm and outright slander are the most common things I see on social media that will hurt the hunting community’s unity. The hunting community is too small for so many debates. If you disagree with the way someone does things—within the bounds of legal, regulated hunting, of course—consider talking to that person privately about it rather than slander someone publicly for all to see. 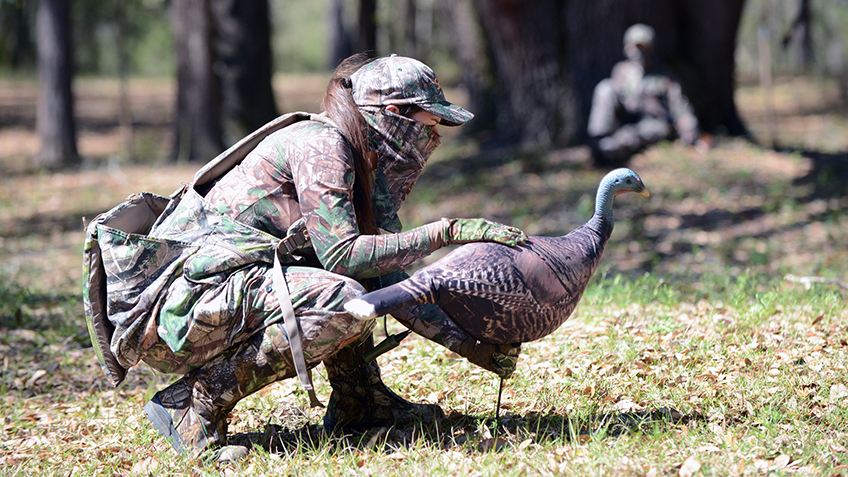 If your hunting involves putting out decoys or the use of dogs, then let images of those activities tell your hunting story rather than images that demean hunting or the animal. (Image by Tim Donovan, Florida Fish and Wildlife.)

Last Words
We face enough opposition from outsiders. We don’t need to introduce more among ourselves by posting irrational or otherwise repulsive photos and words. Instead, let’s build one another up and keep unity in the hunting world.

Every hunter has his own goals, hunting style, aspirations and accomplishments. If we all just respect one another and avoid defaming and destructive posting, the hunting world will be better because of it. I think we all can agree on that.