Youth Archery Camps Change Lives One Arrow at a Time

Mentorship is an effective way to introduce young people to archery and hunting. Many youths would try archery and even bowhunting if given opportunities, but unfortunately not everyone receives those opportunities. Thus, kids pursue other diversions to occupy their time. We must reach them through the outdoors.

That’s why non-profit organizations like Raised at Full Draw (RAFD) are excellent vehicles for showing and teaching kids a purposeful lifestyle in a fun, safe hands-on environment. Let’s have an in-depth look at how RAFD carries the archery and bowhunting torches forward as it works to change lives—one arrow at a time.

Not surprisingly, RAFD was established by someone who wanted to mentor and instill confidence in others and pass on his knowledge of the great outdoors.

“Eighteen years ago, I was working for Primos Hunting and was giving elk seminars in Montana,” explained RAFD founder David Holder. “I was invited by Ladonna Maxwell to attend a two-day kids camp. There, I taught kids to use elk calls. I had decoys setup and a 3-D range. There were 20-some kids there. It opened my eyes to the need for outdoor and hunting education in a camp format.”

Holder looked forward to returning the following year. “The camp kids kept asking for more, so we eventually turned it into a four-day camp,” he said. “I soon realized my passion for working with and teaching kids about the outdoors. In order to go more places and offer more, I broke off eight years ago and started RAFD with my family.”

Designed for kids ages 12 to 17, Holder’s archery camps have expanded and advanced over the past eight years and now impact the lives of youth and adults alike. In the years that followed, Holder began offering youth camps in multiple states as well as a women’s camp or retreat called “Rise,” to teach bowhunting and confidence-building skills that carry into everyday life and, most recently, a three-day camp for young adults and families. RAFD also offers 3-D tournaments to promote its camps.

“We didn’t even have running water the first year,” Holder recalls, thinking back to the early days. “We had to haul water in. All the food was on ice in coolers. We built homemade showers out in the trees. I loved the primitiveness, but it’s very difficult to teach and instruct kids under those conditions.”

So Holder addressed those challenges. “The kids still stay in tents, which gives them a cool camping experience,” he said, “but our staff is able to do its job more efficiently and we have more time to mentor the kids.”

Just as important, RAFD camps cover lots of ground in a positive atmosphere. A typical camp begins on Thursday and ends on Sunday. Holder says that Thursday is mostly spent helping kids to become proficient with their bows. Many bring their own equipment, but RAFD also supplies those who don’t have equipment with everything they need to shoot 3-D targets out to 40 yards.

“We offer some form of entertainment every evening,” Holder added. “We’ll have bonfires and ask questions to see how much they’re learning. We also have many partners that provide gear for the kids to take home.

“Friday and Saturday are similar, except that we break activities into several stations,” he continued. “Each station has six kids or so, and they spend 30 minutes to an hour at each station. That format works well.”

Interestingly, each camp is tailored to the area where it’s held.

“At our Montana camp, we focus on loading a pack, safety issues, glassing, hiking and navigation,” Holder said. “We teach fundamentals of GPS mapping apps like onX, but we also incorporate a topographical map with a compass so they understand what to do if technology fails. In contrast, kids in the Midwest likely will be hunting farm ground where getting lost isn’t a big concern. So we focus a lot more on treestand and ground-blind hunting.” 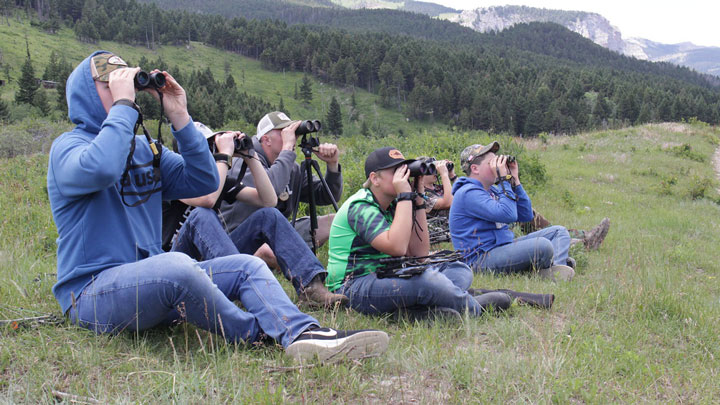 At the end of the day on Saturday, kids who want to can challenge themselves through the camp’s bowhunter education test to get certified. Essentially, the camp is the class, but the kids don’t know it. They think they’re just having fun.

That evening, Holder hosts what he calls “party night” where kids eat hot dogs and cheeseburgers, drink soda and enjoy a bonfire with s’mores. “We don’t sugar them up the rest of the time, but we want to give them one night that’s all about having fun,” Said Holder. “We have what we call a ‘water shoot’ where kids shoot water bags with Genesis bows so that every kid has an equal chance to win.”  Holder plays music and asks the entire staff to watch the competition. “It’s a big deal,” he said. “We’ve seen kids just shaking with adrenaline. It teaches them how to perform under pressure in stressful situations.”

RAFD camps also teach values and ethics. “We’re very proud to say that we ask all kids and staff members to say grace with us,” said Holder. “We raise the American flag every morning and lower it every evening. We’re very conscious of where we live and how fortunate we are. We want the kids to recognize that, too.”

On Sunday, archery and fishing competitions give participants one last hurrah. For those who aren’t able to attend the four-day camps, Holder has started to offer day camps as well.

A Testimony to RAFD’s Success
Holder has numerous testimonies spotlighting how RAFD has impacted the lives of others. For just one example, he talked about a young man who attended his Iowa camp several years ago. He was one of the first was one of the first kids to arrive and sat at a picnic table alone. By his demeanor, Holder wondered if he’d been picked on at school.

“We worked with him, but he wasn’t shooting very well,” said Holder. “He had a farming background, but not a hunting background so we helped him the best we could.

Fortunately, his grandfather called after the camp and explained that he was going to buy the boy a bow.”

The boy returned to camp the following year and was no longer the kid on the sidelines. One evening, Holder went out to tell the kids that it was bedtime and saw the boy surrounded by 10 other kids. He was thrilled to see how he’d opened up to his peers.

“We know that not every kid who attends a camp will become a hunter,” Holder said. “But that isn’t our goal. We want to plant positive seeds for hunting. When they reach voting ages, we want them to remember the principles we taught them and to support us, not oppose us.”

Clearly, mentorship is a powerful tool. If you don’t have the capacity to mentor youths yourself, consider supporting an organization like RAFD that does. To learn more about this organization and/or donate, click here.

Check out our events page to see our camp dates along with our 3D tournaments that helps us promote our camps.