Safari-style combination hunts are among the world’s best because you pursue multiple species on a single trip. Combining your hunts (like your insurance, for example) can save money, yet still costs a pretty penny. With COVID-19 restricting travel, why not plan an East Coast safari for deer, bear and turkey? Maryland, Pennsylvania, Virginia and West Virginia, for example, offer this “grand slam” opportunity on a general license at a fraction of the cost of many Western species-specific tags. All four states have huge tracts of public land providing relatively easy access. Here is what you are missing.

Last fall, hunter Bruce Ryan invited good friend Jay Liechty of Utah and his three sons, ages 13, 11 and 7, to hunt in the heart of West Virginia. Back in 2010, Liechty took the “W.V. Grand Slam” with a bow while visiting Ryan, tagging a whitetail deer, a black bear and a wild turkey.

Liechty invented the Grim Reaper broadhead so his sons were immersed in archery at an early age. All three boys were set to hunt with Excalibur crossbows. Ryan had multiple hunting spots established so the boys hit the ground running. Options included a ladder stand, a ground blind, an old shed right off a game trail and two Blind Turtle commercial blinds with windows, a carpeted floor and a comfortable seat.

The first afternoon the two younger brothers sat with their dad. Keeping two pre-teenage boys still and quiet was nearly impossible. Hunting in September meant the days were long and that success required patience.

“We got two deer that first evening,” remembers Liechty, excitement audible in his voice. “We’d see deer approaching from 100 yards or more that often took two or three minutes to pass by us. Watching the deer approach made the boys’ legs shake as they nearly exploded from the tension.”

Meanwhile, Ryan had taken the oldest boy with him to one of the Blind Turtle blinds, which allowed them to talk softly as Ryan coached him through the shooting process. As seasoned hunters often express, Ryan said he had more fun being the mentor than being the hunter. 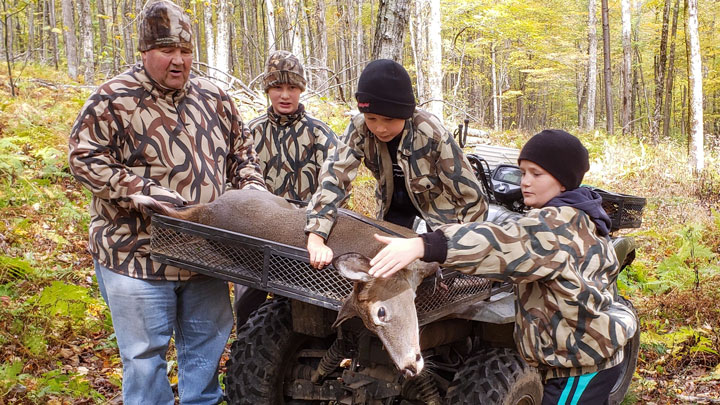 As for the black bear option that the East Coast provides, if you have never hunted black bears with a bow, you quickly will learn that the adrenaline rush reaches a new level. I belong to a hunt club in western Maryland where walking to a deer stand in the dark used to be routine. Not now. In recent decades, black bears have moved into the area and club members routinely see bears twice the weight of the average man on their trail-cameras. It is not uncommon for a bear to stand its ground as you pass by on an ATV or on foot. Of course, wandering into a sow with cubs in the dark can be a life-threatening encounter so most of us bowhunters now carry a sidearm.

From an economic standpoint, black bear hunting in much of the country can be expensive, and Canadian hunts are even more so. Throw in the cost for travel and a hunter may spend $4,000 to $6,000 or more. But in the four eastern states I’m promoting, the total cost of a general non-resident hunting license and bear tag is affordable as follows: Maryland, $145; Pennsylvania, $138.89; Virginia, $262; and West Virginia, $281. By comparison, my Idaho deer license cost $280—and that didn’t include travel or other costs.

While the probability of taking a black bear in these four states is probably less than that of a guided hunt in the West or Canada, black bears are plentiful. I turkey hunted in West Virginia’s Monongahela National Forest and was astounded at the amount of bear dung I saw. Pennsylvania hunters, for example, took 3,300 black bears in 2018. Dropping a bear weighing 300 to 500 pounds there is common. The record bear in the Keystone State, by the way, taken in the Pocono Mountains region in 2010, weighed 879 pounds. Remember that black bears in this four-state area have no natural enemies other than man and typically grow to maturity, thanks to an abundance of acorns and other foods.

When it comes to the quantity of game animals in these states, finding a fresh deer scrape, turkey scratchings and a log turned over by a bear can happen within feet of each other. Each of these places makes for a great place to put up a stand.

As for turkeys, most deer and bear hunters begin their day in the dark, which is the perfect time to hear a flock of turkeys calling softly from the roost before flying down for the day. Likewise, if you are sitting in a treestand or ground blind, using a turkey call is a good way to lure birds to your location. Turkeys and deer do not travel together, but both love acorns and soft mass and may feed in the same area.

Black bears may respond to predator or turkey calls and can provide close-range shooting opportunities, especially if you are in a treestand. Do not worry if you are not an expert caller. Buy a box call and watch a few YouTube videos and you soon will become proficient. Wild turkeys live in fall flocks of old hens and lots of youngsters. When I was learning to use a box call, I ate lunch on the mountain while practicing my calling. Suddenly I heard leaves rustling as an entire flock walked in behind me.

Of course, achieving a multi-species grand slam is an ambitious goal, but part of the draw is that Maryland, Pennsylvania, Virginia and West Virginia offer great recreation in some of the nation’s most beautiful surroundings. All have tourism departments that work to make a visit enjoyable for all ages. Additionally, each state offers reduced license prices for young hunters.

For those who want to make it a family affair as the Liechtys did, I took my wife with me on my last hunt in West Virginia. She opted to spend time at the headquarters of Canaan Valley State Park so I got up early, returned for lunch and a hike, then headed out for the evening hunt. The Savage River Lodge where we stayed is located just off I-68 in Garrett County, Md., in the Savage River State Forest where you can go out together and look for little known artifacts. For example, on Jan. 13, 1964, a B-52 Stratofortress bomber broke up over the mountains of western Maryland and much of its debris was never recovered.

Summary of Grand Slam Opportunities
Those interested in checking out combination-season archery and crossbow opportunities for deer, bear and turkey in Maryland, Pennsylvania, Virginia and/or West Virginia should visit the specific state wildlife agency website(s). Maryland also throws in sika deer and West Virginia adds hogs to the mix. Here are the links for more information.

And by the way, Jay Liechty’s oldest son bagged a bear on that trip and the family left for home with lots of venison, heading home with two of the big three, leaving turkeys for next time. And the youngest will always remember he got to celebrate a birthday with cake, ice cream and lots of hunting stories.