Priceless Lessons Learned during the Pandemic

“Zachary’s classes have been cancelled for the semester and he wants to go turkey hunting with you,” said my daughter in a surprise phone call. “Flying him from Idaho to Maryland during the pandemic may be tricky, but he’s anxious to visit if you are willing.”

Four days later, I departed for Baltimore-Washington International (BWI) Airport during the heart of the pandemic. The usual bustling Interstate 70 was nearly deserted, and my foot was a bit “heavier” than usual in blissful anticipation. During the one-hour drive, my mind returned to my own experience as a grandchild that influenced my life more than any other single event.

When I was 16, my grandfather Joseph Hoffman retired from his well-drilling business to fulfill a lifelong dream—to see Alaska. On May 8, 1963, he, my grandmother and I set out on a four-month trek to the Far North in a Jeep FC 170 pickup with a tiny camper in its bed. We drove across the country up through Glacier National Park, connected to the Alaska Highway and pounded out the 1,000 miles of gravel until finally reaching the U.S. border again.

The cab-over-Jeep model had only two seats so while Grandfather drove, Grandma rode shotgun and I sat on a pillow atop the center console. Each night we broke down the dining table, converted it to a bed and reassembled it the next morning. We stayed with relatives a few times but mostly overnighted at truck stops, rest stops or along the roadside.

Grandfather was an avid fisherman so we stopped at numerous places along the highway to cast spinners into rolling streams. We traveled nearly every Alaskan road from Homer to above the Arctic Circle, often fishing for salmon along the way. We concluded the trip with a 10-day hunt for Dall sheep, moose and bear in the Yukon Territory where we hunted with Indian guides, rode on horseback, climbed mountains and became the predators we were born to be.

Those four months away from my parents and childhood friends, combined with a total immersion in nature, provided experiences that broadened my mind, extended my aspirations and focused my life’s journey. That trip is why you are reading these words today and what inspired me for nearly the past 40 years to be an outdoor photographer and communicator.

Zachary’s Arrival
Parking curbside at BWI is normally forbidden but now was mandatory. I awaited a text signaling my grandson’s arrival. We were soon sharing fist bumps and an awkward hug while wearing our masks. His flight from Idaho to Las Vegas was nearly empty, but the connection to Baltimore was full.

Maryland’s spring turkey season had been open for two weeks and toms were unusually quiet. I still had one remaining tag but planned on devoting my time to Zachary and capitalizing on this once-in-a-lifetime experience. He was about to become a high school freshman and would be consumed with sports and all the things that occupy the schedule of a serious student. Taking a week off from school would be impossible in the years ahead and I wanted to make the most of this very unexpected experience. 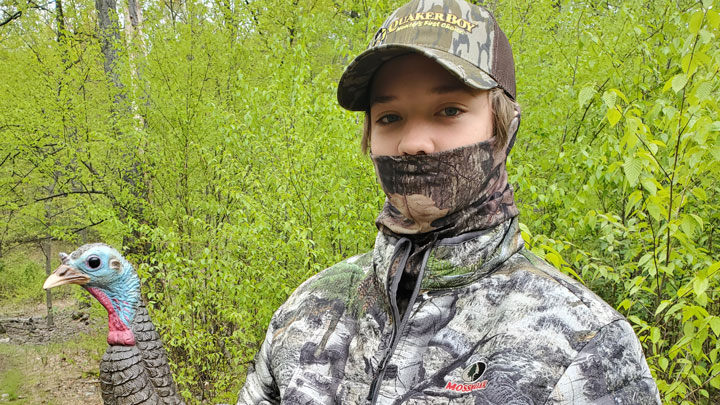 Since a normal early-morning rise would be at 2 a.m. Idaho time, I let him rest and we headed out in mid-morning. I wanted to introduce him to the landowner who graciously lets me hunt her small farm. As we turned into the farm lane, three gobblers stood in the road as if to provide a tantalizing preview of coming attractions.

Gear to Get Started
I participated in a family turkey hunt one spring where a father introduced his 9-year-old daughter to shooting. The recoil of the 12-gauge turkey load nearly knocked her over and she burst into tears. Hunting mentors must take great care to ease youngsters into proper shooting form to prevent flinching and promote precise aiming. During a summer visit, I took Zachary and his two younger brothers shooting with a .22 and taught them the basics of gun safety. We had a Harrington & Richardson .410 single-shot as a family heirloom and, teamed with the Federal HSS loads, I believed its comparatively mild recoil would give Zachary the confidence to make a good shot. The young lad had camouflage clothes and I was astounded to see that my Irish Setter boots fit him well.

Thinking back to my early turkey hunting days, I knew the most challenging thing for a youngster to do while turkey hunting was to be still. Sitting like a stone, holding the shotgun in shooting position and aiming only when the bird is in range are all difficult skills to master. To boost our odds, I chose to use a Mantis II hunting blind, decoys and a folding chair. I enjoy hunting turkeys with a crossbow and this method had been phenomenally successful over the past five years.

The Mantis blind weighs 18 pounds, which made it portable, and its two-hub design allowed us to set up in the dark and move from place to place. Inside its dark interior we could talk, and I could coach him through the shot if an opportunity occurred. We teased each other over how it also was a great place to nap.

The Run-and-Gun Approach
Hunting mornings and late afternoons was surprisingly ineffective. We had lots of laughs in the blind, but turkeys were not gobbling or moving in their usual farm patterns. So, we opted to run-and-gun in the mountains of western Maryland much as I had done with my father for most of my adult life. Being 60 years older than my emerging teen, those mountains seemed increasingly steeper than I remembered. 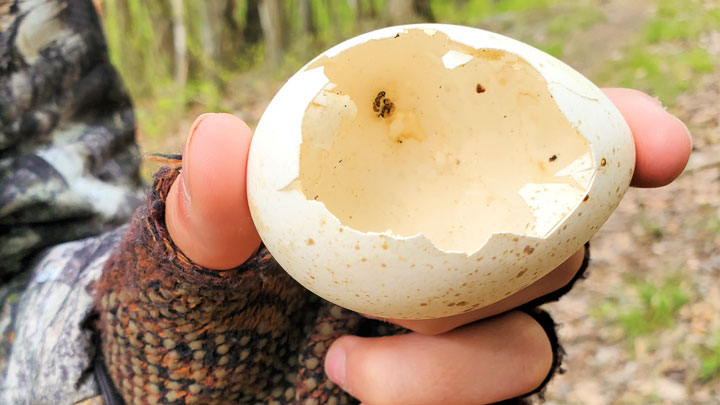 Just as time in the blind allowed us to talk quietly and share experiences, this more active approach had many benefits including the chance to see birds like the Baltimore oriole and scarlet tanager. We heard owls hoot, pileated woodpeckers rant and a host of other sounds that were not previously understood. We found a tortoise, the first Zachary had seen, and an empty turkey egg, fresh bear sign and the largest gobbler dropping I had ever seen. We watched a hen strut and beat up a female decoy at 10 yards. Zachary learned to recognize poison ivy, saw whitetail deer rubs from last fall, climbed into a treestand and spotted several turkeys that my veteran eyes did not.

While we were hunting, my wife made great dinners. When we returned home, we sat at the dinner table where we joked about the day’s adventures and included her in the excitement. This was particularly cathartic to me since it replicated hunting days with my father and the family bonding that occurred at day’s end.

A Parallel Universe
My friend Ken Byers was having a similar experience with his granddaughter, Lilly. He and I have become best friends over the past 15 years and his children have mentored me for elk and Western whitetails. Ken lives in Michigan and invited Lily for her first hunt.

“We had the chance to watch my grandkids for a week due to the pandemic and I realized that she was 8 years old and Michigan had a mentoring program,” Byers said, sharing that taking his granddaughter on her first hunt was a neat opportunity. “She shot her first gun, a .410, which was a big deal,” he shared. “It was just really a special time for me to be in the woods sharing that experience,” said Byers, the excitement notable in his voice. “We chased turkeys on public ground and bagged one on the last day. She got to hunt one day with me, and one day with me and her mom, a special treat.”

The Rewards of Making Time to Mentor
As difficult and tragic as COVID-19 has been to our nation, it proved to me that I am not nearly as busy as I thought. My grandchildren will visit again this summer yet gone will be the intensity of the hunt. This was a once-in-a-lifetime experience for me, and I will be forever thankful for the precious time we spent pursuing a wily gobbler. We did not get one, but that has little consequence in my mind.

Is there a young family member, friend or neighbor you would like to mentor? As an adult, you have far more knowledge of nature than you realize. Passing a love of the outdoors to another generation is incredibly fulfilling and can be life altering to the mentee. Just remember to make it fun and start in small steps. Use YouTube to teach him or her about turkey calls, bird identification, plant identification, even scat identification like a CSI operative. If you love hunting, mentoring is the best game of all.

About the Author
An avid hunter and outdoor writer for four decades, Joe Byers has numerous award-winning articles and photographs to his credit. He is the author of “The Ultimate Guide to Crossbow Hunting,” covering crossbow hunting and gear and tips for hunting a variety of wild game species.