“There are a couple of big bucks on this ranch and with a little luck we’ll get a crack at one,” said our Native American guide. “Joe, since you’ve hunted here before, why don’t you head north to that big canyon while I take Seth toward the south?” Listening carefully to his plan, I needed little motivation before stepping into the bone chilling temperatures of the Great Plains. As I waded through knee-deep drifts and into a biting breeze, I remembered hunting this spot in a previous year.

At the first blush of dawn, I spotted the silhouette of a tall cedar tree on the edge of the canyon and remembered using it as cover to sneak to the brim. Crouching low, I slipped to the cedar, moved around it carefully and sat in the protective cover of its boughs. Quietly removing my rattling horns from my pack, I planned to “crash the canyon” as soon as good shooting light arrived.

Snow crystals sparkled with a yellowing tint as the first rays of sun cut the horizon. I reached for the antlers and banged them loudly as if two rival bucks had met in a savage duel. In an instant, a herd of deer burst into flight 50 yards below me, bounding in several directions as I instinctively reached for my rifle. A deer to my left suddenly began approaching and a quick scope glimpse showed a heavy rack. I looked for an opening in the trees, centered the reticle and fired, sending the buck crashing down the steep slope.

What Just Happened?
Normally, a Great Plains deer hunt requires lots of glassing, walking for miles, several failed stalks and overcoming a host of physical challenges. From the moment of antler crash to rifle discharge took less than a minute, and my head swirled with excitement and anticipation.

The shot felt good and I gathered my gear and headed toward the location of the hit. On the way, I found plenty of fresh tracks and two big rubs. I had only a glimpse at the buck’s antlers, yet they looked mature.

Blood! I felt sure that I had hit the buck and hoped it had made a death run, a feeling that grew stronger with significant spoor in the snow. Moving slowly and watching ahead I spotted a brown form at the very bottom of the ravine. Approaching, I was delighted to see a mature 8-point, probably 3.5 years old, exactly the class of deer I sought. My exuberance was only tempered by the realization of getting the 150-pound animal back to the truck. Suddenly oblivious to the wind and cold, I tagged the buck, field-dressed it and began the climb back to the truck.

Instead of finding an empty pickup, I found the full hunting party was huddled inside. “I see you froze out too,” they said with a laugh. “I’m surprised to see you back so early.” Removing my heavy glove, they saw the crimson tint of my hand and the frivolity of camp trash talk quickly changed to “whaaaat?” Two hours later, we pulled the buck to the pickup and headed for town and steaming coffee all around. I had experienced quick success on previous hunts, but this one took less than a minute.

Reservations without Reservations
I took my first big game hunt in the Mountain West in 1972 and have been an avid fan of this adventurous style of hunting ever since. My one reservation is the cost of nonresident licenses charged by most Western states, 10 times the cost of resident licenses, often to hunt federal land. Not so with Indian reservations. Few native lands have any type of manufacturing or income-producing infrastructure, and so tourism and hunting are significant contributors to the reservation economy. I view my license fees as a contribution to a heritage I admire.

Native American communities are among the most impoverished in the nation. Few have hospitals, and any type of significant health care may require hours of travel, sometimes transport by helicopter at great cost. Alcoholism and drug use are disproportionately higher than most communities and unemployment can be double the national average.

In short, anything that the sporting community can do to support Native American tribes is both welcomed and needed. For example, my whitetail buck required the purchase of a deer license, hiring of a guide, a week’s meals and lodging on the reservation, and the meat was donated to a local organization. Additionally, because reservations are considered politically independent, my deer did not count toward the bag limit for the state of South Dakota, which is true for most reservations across the country. By hunting a reservation, you can hunt seasons and apply for tags that do not diminish local opportunities.

Diamond Willow Ministries
My first year hunting the Crow Creek Reservation, I slept in the basement of a church where I met the pastor and head of Diamond Willow Ministries. Pastor Rod Vaughn was our host and the dynamic leader of this beneficial ministry that addresses the many needs of the Crow Creek community. “One of the best things we can do for the community is help young people get jobs,” he said. “Even to get a job in fast food outside the reservation, they need a computer to apply and training in how to write a resume. “We help them here at the church and also provide assistance and mentoring through the process.” 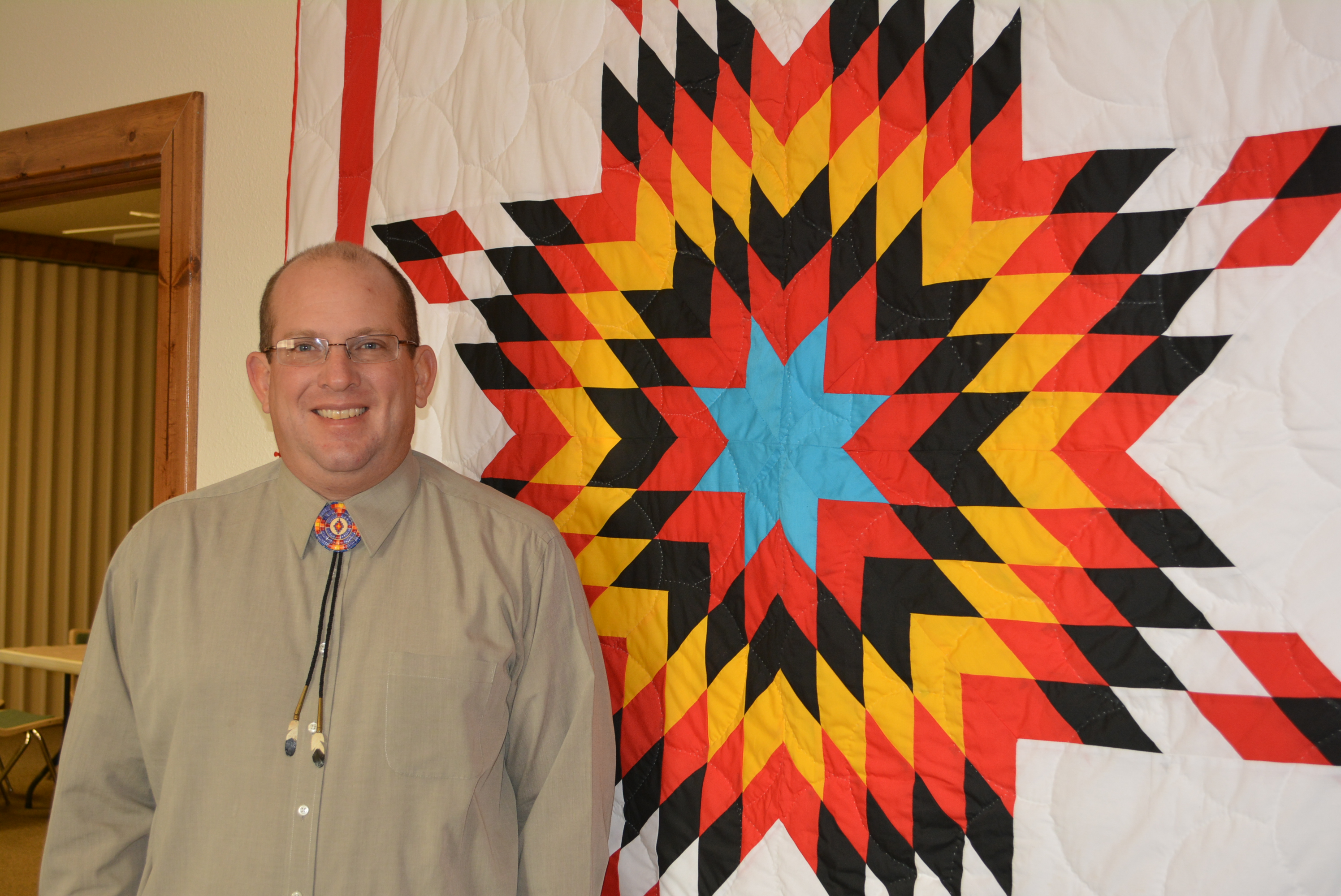 Rod Vaughn is the pastor and executive director of Diamond Willow Ministries, formed in 2002, on the Crow Creek Reservation in South Dakota.

Sunday hunting was legal on the reservation, yet I had to bail from my sleeping quarters so that the church could carry on its mission. Each Sunday morning, a fleet of old school busses heads to the four corners of the reservation to collect church members who congregate for a service followed by a huge brunch prepared by the teen members of the mission.

After stashing my gear in a pickup, I returned to help with the meal preparation. “How about scrambling 10 dozen eggs,” asked Vaughn. “The kids will show you the process.” With more than 100 people to feed, I was confident there would be no “Loaves and Fishes” miracle and that we’d need real food to satisfy their hunger. I quickly learned that reservation teens are no different than teens anywhere as they put me through the “hazing” process.

All the foods came with expiration date stickers and the inside joke among the gals and guys was to put these stickers on the back of fellow teens without them knowing it. When the “kids” could contain their laughter no longer, one explained the gag and I had nearly a dozen on the back of my shirt.

A National Effort
Volunteers from churches and other organizations across the USA come to assist Diamond Willow Ministries with specific needs, whether it is serving as youth camp workers or providing construction expertise. Even though there is a need for assistance from those near and far, the ministry intentionally focuses more each year on empowerment of the youth, and mentoring of future leaders. The embodiment of the old adage, “Give a man a fish and he eats for a day, teach him to fish and he eats for a lifetime.”

If you have never visited South Dakota, you are missing one of the gems of the West. Driving through the Badlands National Park or visiting Mount Rushmore, Custer State Park and a host of other attractions make a trip to the Rushmore State ideal for any family. Additionally, the Crow Creek Reservation is only a 20-minute drive to Fort Thompson from Interstate 90, the primary travel route through the state.

“The Diamond Willow Ministries formed in 2002 for the purpose of building and strengthening the people of our community, the Crow Creek Sioux Reservation,” says Vaughn. “This is being accomplished by bringing people into a relationship with Creator God through Jesus Christ. Diamond Willow Ministries (DWM) meets people's spiritual and emotional needs through personal mentoring relationships and the teaching of Biblical truths and principles. Meeting the many critical physical needs, we see here is a primary outlet for showing Christian love and compassion.

“DWM is a 501(c)(3) non-profit agency comprised of community members brought together by a common vision, including Dakota, Lakota and non-Indians working and living here on the Crow Creek Reservation. All, however, are only one part of the DWM team. The great things happening here are the result of God working through all those who see the need, share the vision and are contributing financially and through prayer.”