The National Rifle Association Institute for Legislative Action (NRA-ILA) has been involved in trying to lift the ban on Sunday hunting in Pennsylvania for decades, but as this website reported, the organization was pivotal in finally getting a Sunday hunting bill passed. When Pennsylvania Gov. Tom Wolf signed Senate Bill 147 into law, he opened up hunting on three Sundays, one during archery season, one at the start of rifle and one to be determined by the Pennsylvania Game Commission (PGC). Work-a-day hunters in the Keystone State rejoiced. NRA-ILA worked with a core group of legislators who toiled tirelessly to overcome countless roadblocks, and in the end, their collective hard work paid great dividends hunters strapped for time to get afield. At the NRA Great American Outdoor Show earlier this month, American Hunter Editor in Chief J. Scott Olmsted got a chance to talk with those legislators.

“Misery acquaints a man with strange bedfellows,” wrote William Shakespeare, and ever since then the phrase has been adapted to politics. Indeed, the pursuit of political agendas may drive people from different sides of the aisle to work together toward a common goal. Of course, Americans have witnessed extraordinarily little cooperation in federal politics lately. But hunters in Pennsylvania can take heart that it was practiced there in 2019.

The common goal, in this case, was overturning a ban on Sunday hunting, a 337-year-old blue law enacted by the British in 1682. This year, thanks to the bipartisan efforts of three Pennsylvania legislators, for this first time ever hunters in the Keystone State can hit the woods on three Sundays. 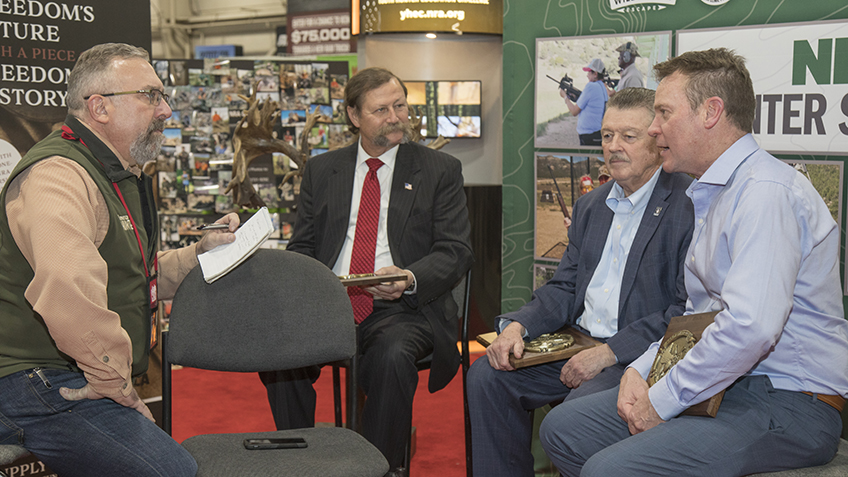 This legislation was needed now more than ever, Weber said. For decades, Pennsylvania has turned out a million hunters every year. But now, as we see elsewhere across America, the number of Pennsylvania hunters is declining. Piled atop changing demographics, increased workloads and changes in family lifestyles, a ban on Sunday hunting limits hunters needlessly. “As a Pennsylvania hunter and the father of young children who I am just starting to get into the woods,” Weber said, “I ask, ‘Why did it take so long to give hunting families the flexibility they deserve and need?’ This bill provided flexibility, but it didn’t come easily. Everything is so partisan. This is one of the very few bills in Pennsylvania where both sides came together, worked together to pass a bipartisan piece of legislation.”

Among the bystanders in attendance to witness the presentation was Kip Campbell, outdoor TV personality and host of “Red Arrow TV.” His remarks could have been made by almost any hunter across the nation who recognizes every day is a good day to hunt.

“It is a bipartisan issue,” he said. “It’s great these gentlemen stepped up. The working man, he has little time in any week to get out and enjoy the sports we all love. This shows just how much these gentlemen care about the people—what a great thing to get done.” 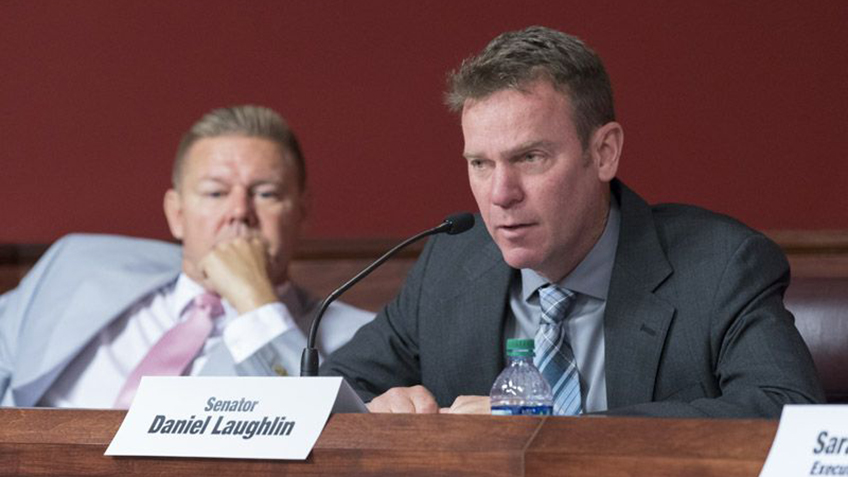 The Pennsylvania law to end the ban on Sunday hunting, SB 147, was signed by Gov. Tom Wolf Nov. 27, 2019. The first step on the trail that ended on that date was taken in 2016 when Laughlin was elected to office and assumed the chair of the Senate Game and Fisheries Committee. “I’ve wanted to hunt on Sundays since I was 12 years old,” he said.

“When I got to the Senate,” said Laughlin, the bill’s sponsor, “I met Sen. Jim Brewster—he was minority chair of the Game and Fisheries Committee. I walked right over to him, introduced myself and said, ‘I want to do Sunday hunting.’”

At that time, Brewster sat on two bills to do just that, but they lacked support. Three majority chairs in the five years before Laughlin was elected were not interested in working with him. “I finally got a majority chair who really got engaged,” said Brewster, a member of three gun clubs.

Brewster acknowledged to Laughlin that Democrats are a tough sell on gun-related issues; without Democrats voting for it, Laughlin’s bill would never get out of committee. Brewster told him, “‘You don’t have enough votes by yourself.’ I think he had 23 but we needed 26.”

Laughlin and Brewster secured those 26 votes, and even more when it mattered. On the floor of the Pennsylvania Senate, SB 147 passed 38-11. Of the 38 “yeas,” 13 were Democrats. But that’s not all: The House version passed 144-54 with Kortz as ramrod.

“This was very personal to me,” said Kortz. In 1982 he was a manager of a U.S. Steel plant in the Pittsburgh area when the corporation shuttered plants and laid-off workers. “I worked 30 years in the steel mills,” he said. “In ’82, when the steel mills crashed in Pennsylvania, I went from working five days a week eight hours to six days a week 12 hours. My only day off was Sunday. I missed a lot of hunting, and that really made me mad.” 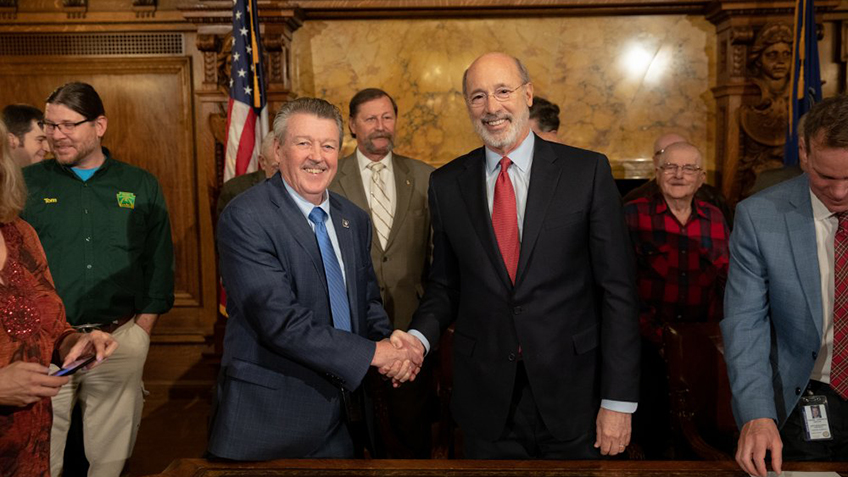 Originally, the trio pushed for 12 Sundays then dropped it to six before finally settling on only three. Early on, they got help from Hunters United for Sunday Hunting (HUSH) and at least 10 other Pennsylvania organizations, but there was a lot of disagreement between these groups. NRA had been leading the charge to end the ban for more than a decade, but this is where the organization’s expertise in lobbying and passing bills really shined, said Tergeson. Dave Weber and the rest of the team at the NRA helped to broker a deal that not only had the support of hunting groups, but that swayed the Pennsylvania Farm Bureau from being solidly against Sunday hunting to neutral—provided trespassing laws were strengthened and enforced. It is now the law that hunters—on any day of the week—must secure written permission from landowners prior to hunting. While the legislators worked within the legislature to broker a deal, the NRA helped from the outside, said Tergeson. Weber, for example, worked to ensure that unarmed hunters simply trying to retrieve a loose hunting dog would not be arrested for trespassing.

It was interesting to listen to these men—NRA members and American Hunter readers—describe their alliance and their efforts. They sounded like hunting buddies who finish one another’s sentences.

They acknowledged they met some resistance among their constituencies, mostly from the Farm Bureau—and there were complaints from the religious community.

“We respected that,” said Brewster, “but what we tried to explain to them was, “Look, we have 1.5 million acres of game lands in Pennsylvania. They belong to the men and women who bought the licenses.”

“Not to mention the private landowners, too,” interjected Laughlin.

“And we lease a thousand acres,” added Kortz, a member of two sportsman’s clubs. “There’s 15 of us who have a thousand acres in Green County, we don’t farm it but we lease it—we can’t hunt on our own land. So it became an issue of property rights. And I used that as I talked to a lot of my friends: ‘Why can’t we hunt on our land?’ You know what? That hit home with a lot of folks. It got them thinking.” 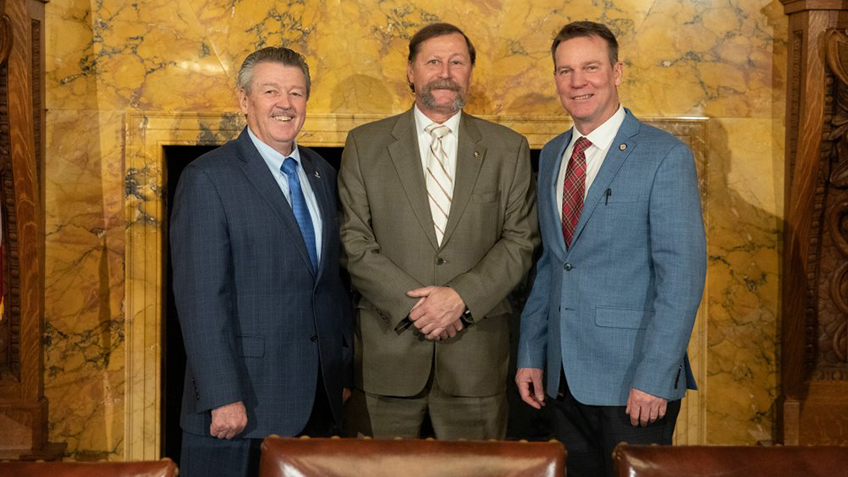 Pennsylvania Rep. Bill Kortz attends the signing of S.B. 147, allowing hunting on three Sundays per season. He's flanked by Pennsylvania Sen. Jim Brewster on the left and Sen. Dan Laughlin on the right. These three legislators led the charging in getting the ban on Sunday hunting in Pennsylvania lifted. (Image courtesy of Sen. Brewster.)

“It’s important that the public knows that it really was about the sportsmen and women—and it wasn’t about guns,” said Brewster.”

“It’s about the sport,” said Kortz.

“If I had three or four calls against it … ,” said Brewster.

“I had a bunch of birdwatchers and a couple of hikers come into my office,” said Kortz. “They were yelling, ‘We don’t want Sunday hunting.’ So I said, ‘Come on back, let’s talk about it,’ and I said, ‘Look, there’s 52 Sundays. Can we just have three?’ … ‘Is that all you want?’ … I said, ‘That’s it: three … deer season, maybe bear.’ … No problem; they got up and walked out. They didn’t understand the bill.”

“A lot of people thought it was 52,” said Laughlin. “I had a little bit more pushback than these guys did but I think it was because it was my name on the bill—the first name on the bill. I knew it was the right thing to do. Interestingly enough, I got some pushback within my own caucus. But I’ve had a ton of support since we got this pushed through. I think a lot of legislators overlooked this, and didn’t realize just how popular it was gonna be. I think they kinda missed the boat but these guys didn’t.”