“David Bernhardt is the greatest man to serve as Secretary of The Interior in my lifetime. He knows and loves the Constitution, he knows hunters, he opened up 1.4 million acres of federal land to hunting and fishing—and I’m grateful to him."
—Sen. Mike Lee (R-Utah), introducing Secretary of The Interior David Bernhardt
at the Western Hunting and Conservation Expo in Salt Lake City, Feb. 15, 2020

Utah Sen. Mike Lee was spot on in introducing Secretary of The Interior (SOI) David Bernhardt at the Western Hunting and Conservation Expo (WHCE) in Salt Lake City on Saturday—and American hunters agree, judging by the applause from the sold-out crowd. Bernhardt’s opening remarks underscored the dynamic partnership between groups like WHCE sponsors—the Mule Deer Foundation (MDF) and Sportsmen for Fish and Wildlife (SFW)—to advance conservation, restore wildlife and enhance habitat through private, state and federal partnerships, calling such collaboration “the definition of conservation stewardship.”

“It’s a privilege to serve President Trump as Secretary of The Interior to advance his priorities for the American people, and the state of our Union is exceptional,” he said, touting how Americans continue to benefit from the President’s policies. Bernhardt assured the highly-engaged crowd that the DOI is actively moving to address access to public lands for hunters and anglers—who fund the bulk of conservation nationwide—calling sportsmen the nation’s true conservationists.

Ever humble over the DOI’s accomplishments under his leadership, the avid hunter and angler said, “The President gave me a clear directive to increase access, and just this year we increased it by 1.4 million acres.” Since assuming his position in 2019, Bernhardt has added a total of 1.7 million acres to date—"And I’m going to beat that number by the end of this year,” he said. If the crowd didn’t already know the man of the hour was one of us, they certainly knew it then. 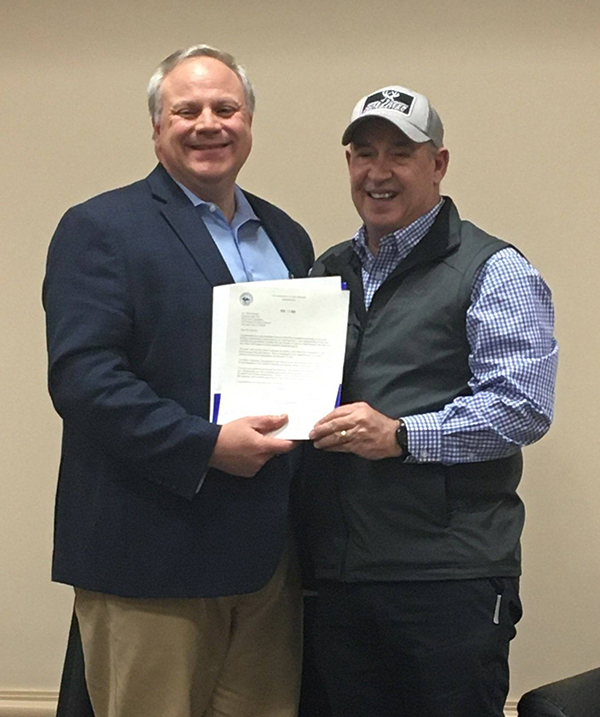 Secretary of the Department of The Interior David Bernhardt, left, presented Mule Deer Foundation President and CEO Miles Moretti with a special letter he wrote thanking Moretti for his numerous accomplishments on behalf of the Mule Deer Foundation.

Bernhardt enjoys attending outdoor shows and sharing updates on the work the DOI is doing for the American people. For evidence of such momentum, look no further than the two points he noted in his fireside chat with WHCE attendees that afternoon. In addition to the DOI recognizing the value of protecting certain undeveloped BLM backcountry areas featuring priority habitats for recreationally-important traditional outdoor sports, he promoted its implementation of S. 47, the John D. Dingell, Jr. Conservation, Management and Recreation Act signed last April. His resulting Secretarial Order No. 3374, among other provisions, specifically expanded hunting and fishing opportunities on wildlife refuges and other public lands and designated timeframes for moving forward on actionable steps within each DOI office or bureau.

For anyone who missed that earlier gathering, Bernhardt restated, “Our [the DOI’s] guidepost for conservation and recreation priorities is Bill S. 47—the first legislation to add public lands in more than a decade. It established for the first time ever the policies of the United States of America is to include facilitating the expansion of hunting and fishing opportunities on federal land.” The crowd applauded, understanding the importance of having such a provision in a statute, or written law. “We removed or revised more than 5,000 federal hunting and fishing regulations to more closely align with state regulations,” he added. “That’s what hunters and anglers asked for.”

With a proven track record, Bernhardt is committed to getting the job done. He closed out his speech reiterating his bottom line—“to advance the President’s priorities for sportsmen and women”—winding down with the heartwarming words we never get tired of hearing: “God bless you and God bless the United States of America.”

As the enthusiastic crowd’s focus switched to the evening’s live auction to raise more money for wildlife conservation, you could feel a lingering sense of pride that comes from being a hunter. Without hunters and leaders like SOI David Bernhardt supporting the natural cycle of wildlife and wild places and working for the humane, science-based management of our renewable wildlife resources, everything would be put at risk. In the words of WHCE Master of Ceremonies Rob Keck—Bass Pro Shops’ director of conservation and host of its “Outdoor World Radio” show—“We salute all those who protect wildlife and our way of life. We salute you, we thank you and we love you.”