True to form, opening day of the National Shooting Sports Foundation’s annual SHOT Show in Las Vegas featured new guns, ammunition, optics and gear as far as the eye could see, but this time two special guests claimed just as much attention as the new products: the Trump administration’s Secretary of The Interior (SOI) David Bernhardt and Secretary of Agriculture (SOA) Sonny Perdue. The duo walked the show floor at the Sands Expo and Convention Center and even held an informal fireside chat with fellow hunters and shooters and members of the outdoor media, mingling and celebrating our mainstream outdoor traditions.

Moderated by Larry Keane, the NSSF’s senior vice president for government and public affairs, the informal Q-and-A session featured questions from the audience regarding the Trump administration’s track record of standing with sportsmen. Bernhardt started by promoting its focus on expanding hunting and fishing on national wildlife refuges. As NRAHLF.org reported in September, the Department of The Interior (DOI) opened or expanded 1.4 million acres in 2019—doubling the federal acreage made available to sportsmen over the past five years combined. And he said sportsmen can expect more expansion in the near future.

Bernhardt also highlighted the Target Practice and Marksmanship Training Support Act signed by President Trump in May 2019. Amending the Pittman-Robertson Wildlife Restoration Act (P-R), it “facilitates the establishment of additional or expanded public target ranges in certain states.” [Note: The original bill was drafted with support from the National Rifle Association Institute for Legislative Action (NRA-ILA) as building shooting ranges and enhancing opportunities for shooting practice and training are integral to fostering hunting and shooting sports participation.] Bernhardt was spot-on when he emphasized, “The biggest public lands package was put forward under this President’s watch. The guy gets stuff done.” Clearly, the administration recognizes the importance of having access and wildlife management enshrined into law.

Perdue focused on promoting reforms that benefit wildlife such as prescribed wildfires that clean out forest underbrush and create multi-use environments for wildlife to outdoor recreationalists. When asked to comment on chronic wasting disease (CWD) and what his department was doing to prevent its spread, he said it is working on acquiring better science and increasing awareness and clarified that the disease is not transmissible to humans. He also gave a nod to the Farm Bill passed in late 2018, solidifying multiple provisions for America’s wildlife, including taking unproductive ground out of production. 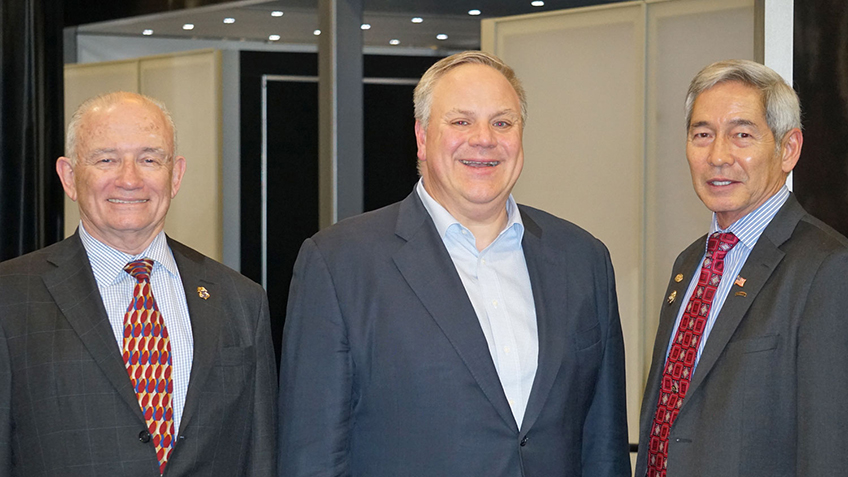 Next up for discussion was the John D. Dingell, Jr. Conservation, Management and Recreation Act passed in April 2019—the consolidation of more than 100 bills providing statutory authority to build regulations around public access. Both secretaries acknowledged how the victory also was due to conservation groups coming together in a bipartisan way to support the rights of people to use public lands.

Of course, coming together requires communication and partnerships between the two cabinets too, as evidenced by the Department of The Interior’s 17-member Hunting, Shooting Sports and Conservation Council (HSSCC). Comprised of hunting and wildlife conservation experts, the council’s purpose is to provide input to the SOI and the SOA regarding the establishment and implementation of policies impacting wildlife and conservation. It also examines ways to benefit wildlife resources; encourages partnerships among the public, sporting conservation organizations and state and federal government; and benefits hunting and the shooting sports.

Bernhardt explained how pulling together the broader community through the HSSCC says a lot about this administration’s priorities for getting a diversity of opinion. As Perdue said, “Democracy works best when there’s engagement, where people can say, ‘Here is where the public is [on this issue] and this is what we’d like.” I thought how refreshing this was considering hunters and shooters never saw any such effort put forth by the prior administration.

As many of us have seen firsthand, Bernhardt called attention to the fact that too often people don’t get into or get out of hunting or fishing due to lack of access to lands and/or excessive regulations. This is why he said the DOI already has modified more than 5,000 regulations pertaining to hunting and fishing alone.

Because recreation is our collective gateway to exploring America's outdoor destinations, Perdue urged everyone in the room to visit Recreation.gov—a website providing tools for discovering new adventures. A one-stop shop for inspiration, trip planning, information sharing and reservations, material can be pulled up nationwide and by zip code, including information on camping, picnicking, hiking, rafting, ranger-led experiences and more.

For a parting shot, when asked to share their favorite hunting story, Bernhardt said it was the time he first took his son goose hunting and witnessed him getting hooked on the outdoors. Perdue’s response: a tie between his most recent hunt and the next. Like the rest of us, he enjoys it all.