The Florida Python Challenge 2020 Python Bowl concluded Jan. 25 with the Florida Fish and Wildlife Conservation Commission (FFWCC) and the South Florida Water Management District (SFWMD) announcing the results and winners at a live event during the buildup to the Super Bowl in Miami. In total, 750 people from 20 states participated in the 10-day event resulting in 80 invasive Burmese pythons being removed from the Florida Everglades. Awards were distributed for the most pythons eliminated, and the longest and the heaviest of those snakes. In addition, activity-duty military and veterans competed in their own subcategories for most, longest and heaviest snakes.

Bass Pro Shops ponied up the cash prizes as well as two Tracker 570 Off Road ATV grand prizes, valued at approximately $6,000 each. Those ATVs went to the professional and rookie, or amateur, python hunters for removing eight and six pythons respectively. The pro and rookie grand-prize winners for length received $2,000 each for snakes measuring 12 feet, 7.3 inches and 11 feet, 6.5 inches respectively. And the pro and rookie grand-prize winners for weight also received $2,000 each for 62-pound and 49.4-pound pythons respectively. Additional cash prizes and financial support was provided by the Bergeron Everglades Museum.

Since March 2017 more than 4,000 invasive Burmese pythons have been removed from the Everglades subtropical wilderness in southern Florida. As this website reported, the situation in the region has been well documented over the past several years as the explosion of these creatures has drastically impacted the populations of native big game, essentially wiping them out. Authorities in the Everglades have been turning to sportsmen to help with the issue through paid and unpaid participation programs. The SFWMD website states that “the Python Elimination Program incentivizes a limited number of public-spirited individuals to humanely euthanize these destructive snakes, which have become an apex predator in the Everglades.” 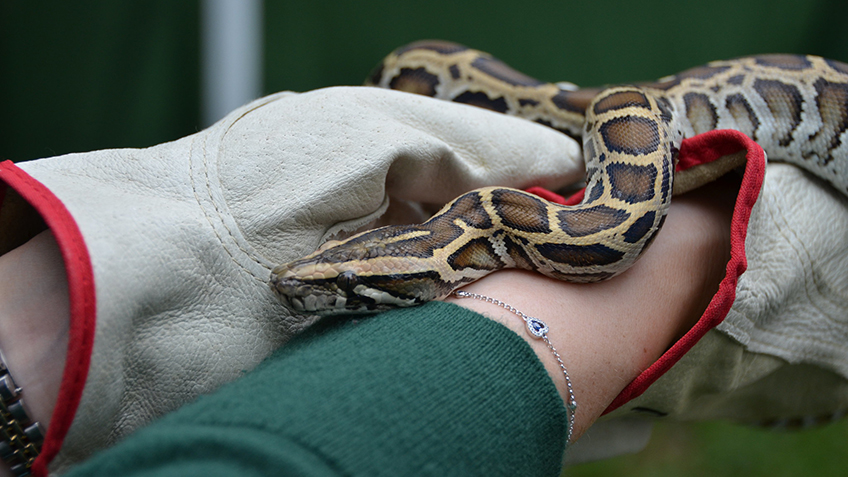 Although some Burmese pythons are pets that were irresponsibly released into the wild, the majority were stored in commercial operations that were damaged during hurricanes. The snakes escaped and have since wiped out rabbits and fox, for example. They are capable of devouring whole deer and can kill a human. (Image by Carli Segelson, FFWCC.)

The SFWMD recently announced an expansion of its paid program, which doubles the number of public participants from 25 to 50, including hourly pay and bonuses for killing different lengths of snakes or nests. Just prior to the results of the Python Bowl being released, there have been over 17,000 feet and 32,000 pounds of pythons killed in South Florida. The base pay for these civic-minded individuals is small, but the bonus structure is respectable. It resembles the structure of performance bonuses professional athletes negotiate into their contracts. Python hunters receive $8.46 per hour for up to 10 hours each day. They are then paid $50 for pythons measuring up to 4 feet and an extra $25 for every foot measured above 4.

Now, before you, me and the rest of the boogaloo boys show up in camo fatigues and hats making it look like Crocodile Dundee and Indiana Jones are back for the second coming of the apocalypse, let’s lay out the ground rules. This program is specifically a removal effort for the elimination of pythons from state lands surrounding the Everglades National Park. (The park comprises the southernmost 20 percent of the original Everglades.) Target snakes are known to be in the SFWMD properties within Miami-Dade, Broward, Collier and Palm Beach counties and efforts are focused on trying to slow the expansion of the snakes as they move west toward locations such as Big Cypress National Preserve and farther north into Broward and Palm Beach counties. 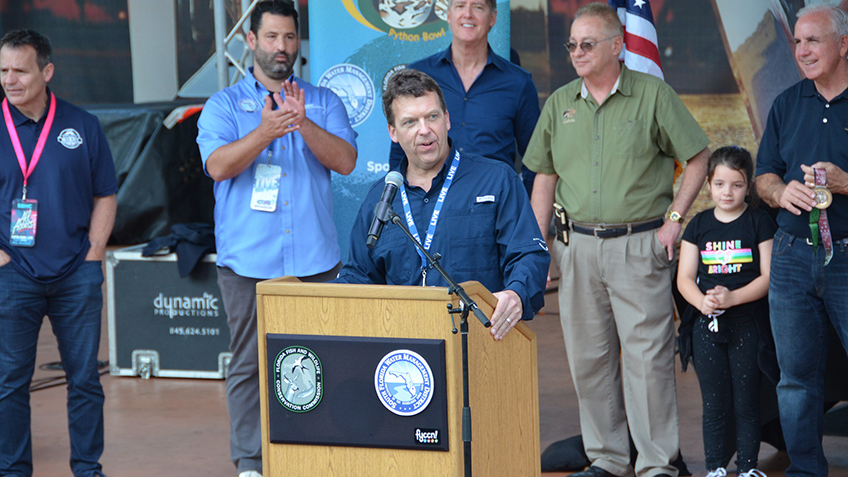 The Python Bowl grabs the headlines, but it isn’t just about the most or the biggest pythons killed. News coverage informs people worldwide about how devastating invasive species can be to native flora and fauna. Most importantly, reports point average citizens toward online training on how to handle pythons they encounter on their own land and how to report kill data to the state. The online training is mandatory for Python Bowl participants, but an additional 550 people took the course so they could be part of the effort to eradicate these predators. The material covers how to dress properly, where to look for snakes, how to identify Burmese pythons from other snakes native to Florida and how to handle pythons when you encounter them. A final quiz is administered and an 80-percent or better score is required to pass.

SFWMD board members also agreed to increase the program’s budget to $750,000, and even Florida Gov. Ron DeSantis acknowledged the issue facing the state and helped push for the expansion of resource allocation. Rodney Barreto, chairman of the Miami Super Bowl Host Committee said his committee "is very proud to have worked with these partners to bring attention to the threat that invasive species pose to the Everglades.” He then handed-off a python-skin football to DeSantis. While the district will choose participants based on the level of experience, willingness to commit time and familiarity with the Everglades, Randy Smith of SFWMD says, “This is a tough endeavor. People on our payroll do this because they have the time and many are in the field eight to 12 hours at a time.” Popular methods are driving the levees and glassing for snakes while some hunt at night from boats with lights. 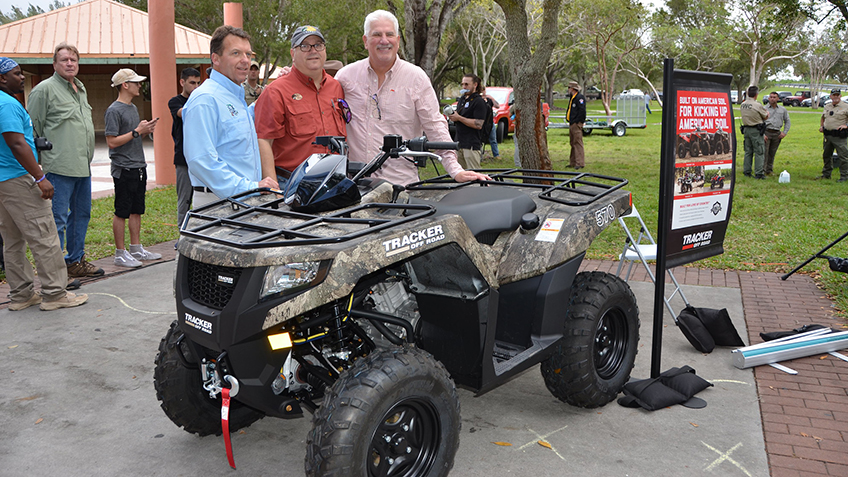 Smith continues, “It’s important to understand that the program for hunting pythons is split between the Florida (Fish and) Wildlife (Conservation) Commission and the (South Florida) Water Management (District).” Currently, Smith says their program takes place on lands held by the state and local water conservation departments. Smith told me that the funding is going not just to their hunters but also to research through local universities to better understand the behaviors and overall population numbers of the invasive snakes.

“We don’t know really how many snakes are out there. That’s the part we are trying to get a better grasp on. However, we do believe ground zero is south of Lake Okeechobee,” Smith says.

Perhaps out of habit I had to ask Smith what hunters were using for their weapons of choice. I look at these ugly creatures and can see the effectiveness of a well-placed turkey load at close range, slugs and buckshot. Smith told me that they have to adhere to the American Veterinary Society’s guidelines for humane dispatch, which essentially focuses on quickly crushing the central nervous system. While some snakes are captured live and killed with a knife, guns, ranging from shotguns to rifles, are the popular options. 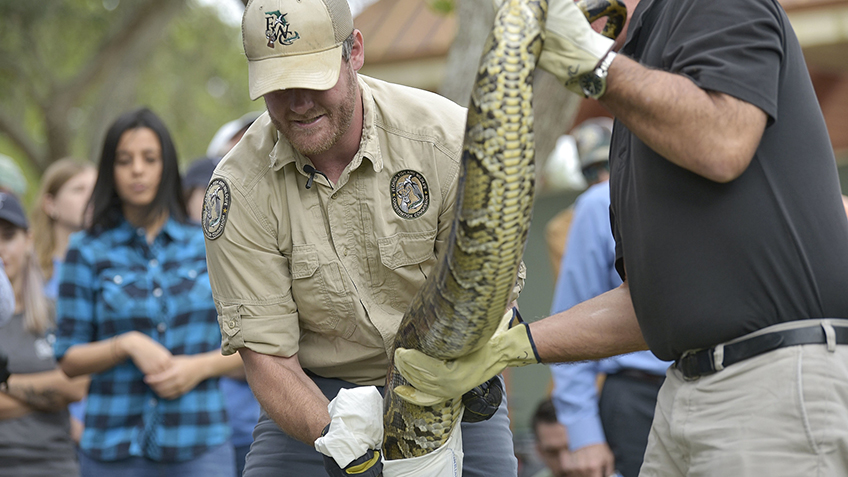 Robert Edman, FFWCC biologist, bags a Burmese python. Once a good grasp is established, it does not take a lot of strength to control the snake. It often does take another person to help bag the snake. (Image by Avery Bristol, FFWCC.)

Smith also told me that he was well pleased with the outpouring of interest and desire to join the paid program. “We just took the application down (from the website) since we quickly surpassed 1,000 applicants,” he said just prior to the wrap-up of the Python Bowl. The regulations on the FFWCC website, however, does allow for the humane killing of the snakes without a permit on private lands.

The gloves are off in Florida, so to say. Like with any invasive species, it is a long and often uphill battle to contain the situation. However, the encouraging element from an operational standpoint is that the state is leaning on sportsmen to help be a part of solving the problem. This is a ground game with mass effort coupled with scientific research in play to try to retake the famed region of the state.

Now the real question is: Who wants to put together a team for the 2021 Python Bowl?