Rigby. A brand synonymous with the stories from Jim Corbett, Winston Churchill and W.D.M. Bell is one of the most storied gunmakers in the world. Famous for the double rifles and bolt-action guns used for hunting dangerous game species along with their shotguns, pistols and match guns, a gun produced by John Rigby and Co. feels personalized because of the man-hours and the level of detail crafted into each gun. Every year I walk by the Rigby booth and see the incredible guns it produces, always wondering about the story behind the name. Here at the SCI Convention at the Reno-Sparks Convention Center in Reno, Nev., which runs Feb. 5-8, we hunters get to celebrate our hunting history and culture by visiting the Rigby booth and the booths of nearly 50 other gunmakers and thousands of outfitters, wild game artists, jewelers, home-furnishing makers, taxidermists and more.

Founded in Dublin, Ireland, by John Rigby in 1775, Rigby is the third oldest manufacturer in the world. The Rigby family-owned operation is now four generations old. Through the years, its manufacturing operations were moved to London, England, and then to the United States before moving back to the United Kingdom. The marketing manager for Rigby told me one of the unique aspects of Rigby is its relationship with another storied manufacturer: Mauser. In 1899, Rigby collaborated with Mauser engineers to make a special action for its popular rimmed .400/350 cartridge and in 1900 the world witnessed the “birth” of the magnum action. Dangerous game hunters have to thank this part of history since the collaboration provided the ideal platform: the .375 H&H, .416 Rigby and the .505 Gibbs.Rigby. Rigby Managing Director Marc Newton told me this collaboration with Mauser in the late 1800s really was the catalyst that put Rigby on the map as a reliable hunting rifle for those hunting everything from deer to dangerous game. To this day, Rigby manufacturing uses many Mauser barrels and actions and both companies are now owned under the Blaser family of brands. A unique connection considering the history both companies have shared for more than a century. 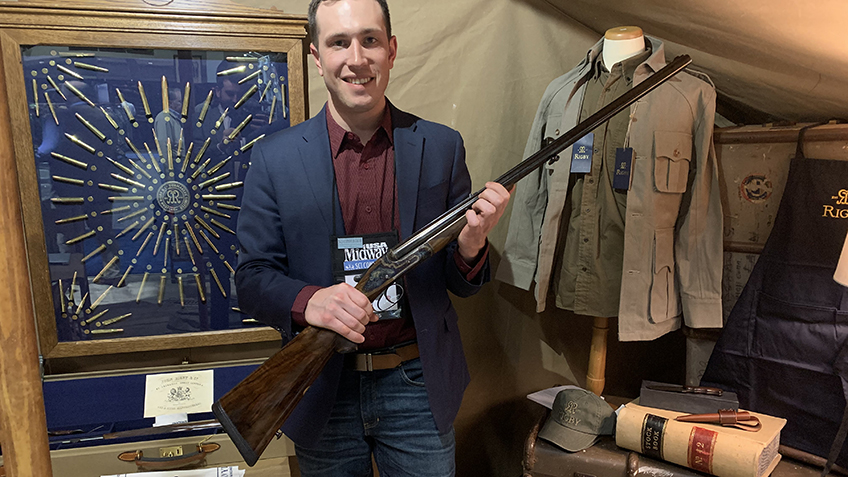 The John Rigby and Co. booth at the SCI Convention is set up to invoke a vintage safari tent, complete with antique suitcases, tweed hunting attire and, of course, some of the most beautiful firearms the world has ever seen, one of which the author is holding. (Image courtesy of Jason Reid.)

“We make around 250 guns per year and some can take up 1,400 man-hours or more to complete,” Newton said, adding that Rigby employs 15 gunmakers specializing in the unique detail for which hunters have come to expect from Rigby. “Of the 250 we produce, 50 or so are our London Best Bolt-Action rifles and Rising Bite Double rifles,” Newton said. “No two are the same as they are produced by hand. The extensive detailing is a labor of excellence.” While Rigby is noted for the creation of many time-tested models and their associated calibers, none of them may be as awe-inspiring as the 1879 Rising Bite Double Rifle, which derives its name from its unique vertical-bolt locking system and continues to be one of the most famous and reliable double rifles ever created.

Newton told me that after being out of production for 80 years, it resumed building the iconic Rising Bite Double Rifle. “We wanted to get back to the old ways,” Newton said. “We did so by reverse-engineering a pre-World War II model that had been delivered to the Maharana of Udaipur in 1902. All the parts of the Rising Bite Double Rifle are made from the U.K. and feature Rigby pattern full-scroll engraving, carved folding leaves on fences, gold inlaid details, color case hardening, and London Best oil finish and barrel black.

The Rising Bite Rifle recreation is celebrating its now fourth year, back after it made its debut at the SCI Convention in February 2016. While Rigby is known for many guns and calibers, it truly is built in honor of the deep heritage of the company and continues to perform afield today.

Jim Corbett; A Rifle's Journey
This John Rigby and Co. video tells the story of Jim Corbett's fabled rifle in a short that is visually beautiful and musically majestic, complete with a chilling sound at the end.

Any hunter obsessed with history will be captured by the awe and allure of a manufacturer such as Rigby that holds such high regard for its past. The rugged individualism possessed by the men who killed man-eaters with these guns and fought wars at the turn of the 20th century is more than enough to make one feel a sense of reverence when holding a Rigby gun. A few years ago I had the chance to hold Jim Corbett’s rifle at an SCI seminar that actually was presented by Newton. We both shared a smile and our remembrances of that afternoon.

“People buy our rifles not just because they look great or have their favorite calibers,” Newton said. “We reach people because of the history. It is an inescapable element of the Rigby name and something of pride for all of us involved—and especially for our customers.”

Editor’s Note: I watched John Rigby and Co. make headlines at the SCI Convention and around the world with its return to the hunting scene in 2016. I covered its auction donation of a breathtaking, commemorative .275 Rigby Jim Corbett Rifle valued at $150,000. As one of the thousands of hunters who visited the Ribgy booth that year to see it on display, I was told its design was inspired by the rifle presented to Corbett in gratitude for shooting the man-eating tigress of Champawat, India, in 1907. Corbett later used the rifle to end the scourge of the infamous Rudraprayag leopard, killer of more than 125 people, arguably making it one of the most famous sporting rifles in existence. It is little-known that Rigby exported more rifles to India than Africa before World War II so it was quite fitting for Rigby to commemorate the bygone days of hunting in India.—Karen Mehall Phillips, Director of Communications for the NRA Hunters’ Leadership Forum and Senior Editor of American Hunter