Honoring her dedication to pursuing big game around the world and her work in protecting America’s hunting and wildlife conservation heritage, Safari Club International (SCI) presented NRA and SCI member Susan Hayes of the Los Angeles area with its 2020 SCI Diana Award at the annual SCI Convention banquet in Reno, Nev., Feb. 8. Sponsored by the  (WLF), the award fittingly is named for Diana, the goddess of Roman mythology who reigned over wild animals and the hunt. It recognizes the women of SCI who have excelled in international big game hunting, demonstrated exemplary ethics afield and dedicated their time to enhancing wildlife conservation and public education regarding hunters and hunting.

Introduced to the crowd by past Diana Award recipient Angie Hall (Diana 2018), who noted Hayes had hunted on six continents for 150-plus species over the past 15 years, Hayes was presented with the award by previous Diana Award winners, Denise Welker (2017) and Brenda Potterfield (2019). Hayes was the image of patriotism as she approached the podium to accept the award, partly because she chose her blue gown knowing the stage would be decorated in red and white. That love of American freedom has propelled her to serve the SCI and the NRA, serving on the NRA WLF Executive Committee, The NRA Foundation’s (NRAF) Board of Trustees and as chairwoman of the NRAF’s Investment Committee. A sommelier, she maintains a “Defend 2A” page on her WiSH Vineyard’s website as she works for the common goals of America’s hunter-backed, hunter-funded wildlife conservation groups. 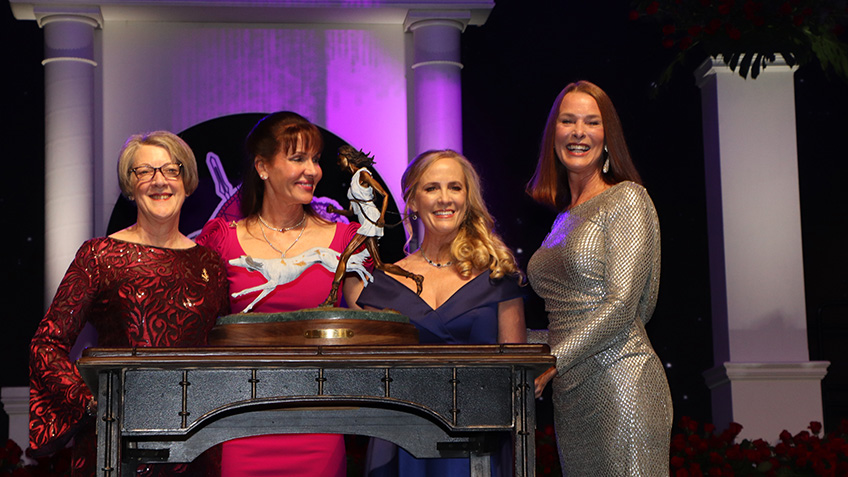 With gratitude and humility, Hayes thanked the NRA, SCI, her friends and family and, of course, the Dianas, who she said, “helped me to be aware of who I can be in this community—and I am privileged to be a part of it.” Perhaps saving the best for last, she thanked her best friend and husband, Bill, who has encouraged her love of hunting at every turn. “Our adventures have shaped who we are and how we live, which is pretty great,” she said. He, too, demonstrates what we hunters are all about—sharing in the adventures, supporting fellow hunters and providing opportunities for others to learn about and enjoy the sport. As a hunter who has set foot with her on those same six continents, he is her biggest cheerleader.

In cheering on other women, in turn, she said, “Women hunters are no longer a rare breed. And if you get the women, you get the moms, grandmothers, the kids—you get them all”—a fact Donald Trump Jr. underscored moments later as SCI’s keynote speaker. “To those who are hunters or who support the hunters in their families, bring them in,” she urged. “Together we can make a difference.”

While Hayes knew the path she was on to excel in the hunting arena would have its challenges, she turned those challenges into opportunities while reaching out to other hunters about hunting. Growing up in California, she says she has seen the erosion of respect for hunters and gun owners firsthand and encourages women in her home state to understand and protect our freedom. And while no hunter takes a game animal on every hunt, her family certainly enjoys when she does, considering she is a graduate of Le Cordon Bleu and would be set to prepare yet another fine dining experience for all in taking her wild game from field to table. 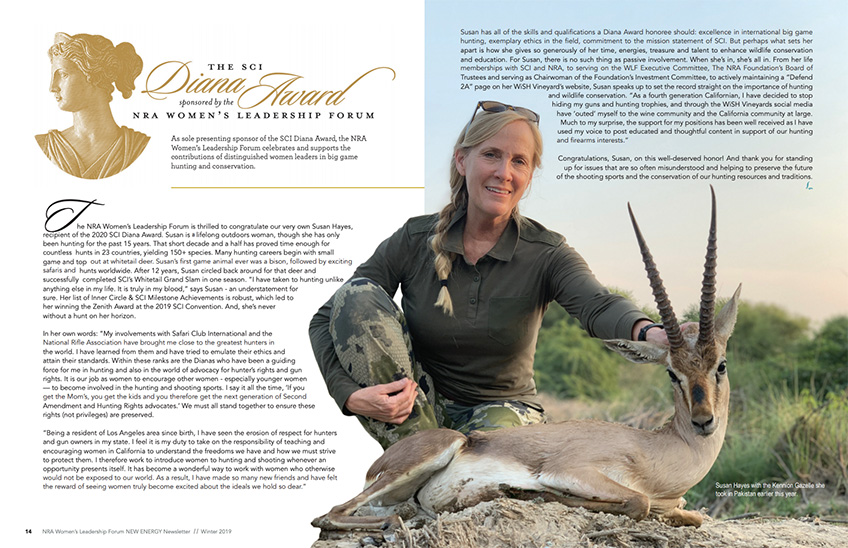 This article appeared in the NRA Women's Leadership Forum New Energy newsletter, Winter 2019. In it, 2020 SCI Diana Award recipient Susan Hayes is pictured with a Kennion Gazelle she took in Pakistan in 2019.

Of course, while receiving such an honor is fulfilling, we hunters do not hunt for the recognition. Being acknowledged for accomplishments made for doing what we love, in fact, is not even expected—but it is important. It is human nature to want to recognize excellence, emulate those who attain it and, in the case of the NRA and SCI, support the people who inspire our ranks. When it comes to Hayes’ worldwide hunting accomplishments, she is particularly inspiring and an asset as we hunters remain under attack by those who seek to end all hunting. We need more ambassadors who can talk with non-hunters and articulate the issues.

As Hayes noted in an interview with the NRA WLF New Energy newsletter in the Winter 2019 issue, “My involvements with Safari Club International and the National Rifle Association have brought me close to the greatest hunters in the world. I have learned from them and have tried to emulate their ethics and attain their standards. Within these ranks are the Dianas who have been a guiding force for me in hunting and also in the world of advocacy for hunters’ rights and gun rights. It is our job as women to encourage other women to become involved in the hunting and shooting sports.”

Oh, and speaking of her award-winning vineyard, WiSH, as someone who has enjoyed her WiSH meritage and cabernet, I should mention that those in search of a nice bottle to pair with their next wild game dish might want to give it a try.

About the NRA Women’s Leadership Forum: The NRA Women’s Leadership Forum is the fastest-growing community within the NRA. Uniting women of influence, it is a philanthropic society of women who are dedicated to protecting and defending our Second Amendment. As the sole presenting sponsor of the SCI Diana Award, it celebrates and supports the contributions of distinguished women leaders in hunting and wildlife conservation. Visit nrawlf.com for more information or to join.