Humble, inspiring and dedicated to saving hunting’s future are all words that describe NRA philanthropist and wildlife conservationist Brittany Longoria, who was presented with Safari Club International’s esteemed Diana Award at its 50th Annual Hunters’ Convention at the Mandalay Bay Convention Center in Las Vegas on Saturday night. Sponsored by the NRA Women’s Leadership Forum (WLF), the award is named for Diana, Roman mythology’s goddess of the hunt, and recognizes the women of SCI who have excelled in international big game hunting, demonstrated exemplary ethics afield and worked to educate the public on the role of hunters and legal, regulated hunting in wildlife conservation.

“It is a humbling honor to receive this award sponsored by the NRA, and I am especially thankful to be given it on SCI’s 50th anniversary,” said Longoria, who has hunted on six continents since going on her first hunt at age 11. The owner of Rock Environmental LLC, an international nonprofit consulting firm, many of us know her as someone who has come under fire from animal rights extremists while promoting hunting and working to educate non-hunters on hunting’s role in wildlife conservation worldwide.

“Many others deserve to share in this award,” she said, in thanking those who have supported her through the years, including her husband, Ricardo, the past Diana Award winners and especially her father, the late Joe Hosmer, the SCI Foundation’s first president, who passed away in 2020.

“My heart felt a little heavy winning the award nine months after my dad passed,” said Longoria, who could not be acknowledged at the SCI Convention until this year after the 2021 show was cancelled due to COVID. “Thank you for passing down your sense of adventure and for your unwavering pride in all that I do,” she said, giving thanks for growing up in a hunting family—something that all of us who have done so related to and appreciated.

Presenting the award were NRA WLF founding member Jane Brown, 2019 SCI Diana Award recipient Brenda Potterfield, co-owner of MidwayUSA, and 1995 SCI Diana Award recipient Audrey Murtland. At age 91, Murtland, by the way, who the Dianas refer to with pride as their “Betty White,” is planning to head for Spain and chase another ibex to celebrate her 92nd birthday in April. The Dianas have a wonderful little obsession when it comes to celebrating our hunting heritage. Wouldn’t the world be a better place if everyone had a passion for the hunt and were driven to live life outdoors? 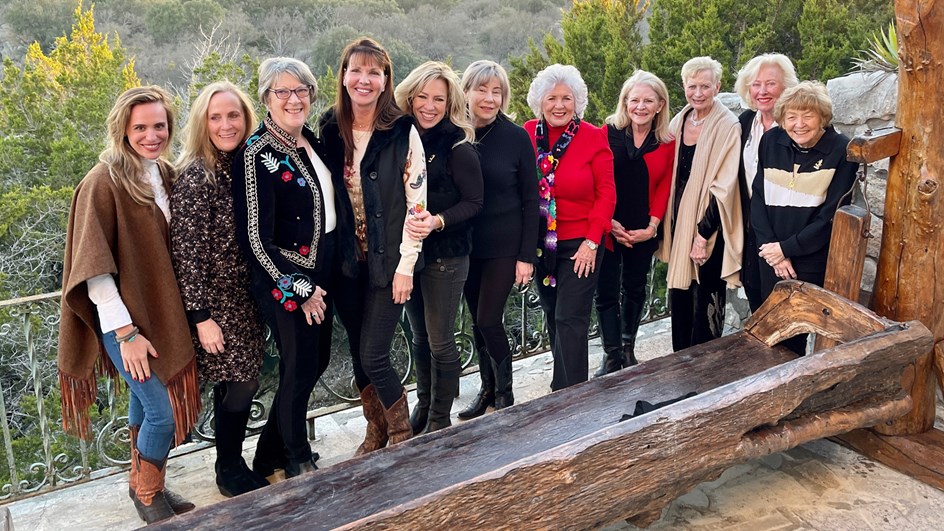 Longoria—and all the Dianas—understand the significance of hunting in today’s world and what all humans could lose if hunting is banned. As the Dianas build upon shared convictions, so must every hunter if we are to ensure that wildlife management decisions remain based on science and that our North American Model of Wildlife Conservation flourishes into the future.

As someone who grasps the joy of a stalk regardless of the outcome and understands what it means to be a hunter, she ended her speech by asking an important question to the thousands of hunters in the crowd: “Have you told your stories to people who don’t look like you? The freedom to hunt is not a right; it’s privilege. Speak your truth about who you are and what you do. God bless.”

Standing Against the Virtual Lynch Mob
Readers of the NRA Hunters’ Leadership Forum website, NRAHLF.org, already know Longoria, who has been a voice in standing up for hunters and hunting amid death threats and other social media attacks. “If they come for me as a hunter, they’ll come for you as a hunter,” she warned at a 2019 SCI Convention press luncheon after spending the fall of 2018 under a barrage of social media death threats from extremists over a photo of her with a leopard she hunted in Africa. When SCI posted the photo on its website, it immediately went viral as did the threats, topped off with hashtags including #FINDTHISBBITCH, #MONSTRESS, #MURDERHER and even #POACHER—despite that poachers are criminals while hunters are law-biding wildlife conservationists who pursue a legal, regulated activity. The death threats and other attacks on social media marked yet more hypocrisy as those against her condemned her for hunting while threatening her life. Once again, the NRA HLF website tracked how the truth about hunting and where hunters’ dollars go was swept under the rug because the last thing the world’s well-funded, well-organized animal rights extremists will let happen is public education.

Longoria said she realized that the attacks provided an opportunity to step forward and speak up for hunting. She started doing her own social media posts and worked to tell her story—the story of hunting. Like 2014 Diana Award recipient Olivia Opre, who also has endured death threats because of her passion for hunting, Longoria understands that talking with non-hunters and promoting hunting’s cultural acceptance is how we sustain our way of life into the future.

That action plan is right in step with the NRA HLF’s book, “How to Talk to the Public about Hunting,” by Responsive Management Executive Director Mark Damian Duda. Based on NRA HLF-backed research accessing public attitude toward animal rights and animal welfare, the book teaches hunters how to be tactical thinkers and communicators in seizing the narrative. Legal, regulated hunting will endure only if we succeed in persuasively telling non-hunters our story.

Important to note, while receiving the award marks a tremendous personal achievement, hunters do not hunt for recognition. Being acknowledged for accomplishments made for doing what we love is never expected. Yet it is human nature to recognize excellence, emulate those who attain it and, in the case of the NRA and SCI and the Dianas, support those who inspire us to meet the challenge.

Congratulations, Britt! The hunting community thanks you for working to protect hunting’s future and for celebrating hunting. We hunters also thank you for your unwavering support of the NRA Hunters’ Leadership and Women’s Leadership forums, SCI, the Dallas Safari Club and other like-minded hunter-backed organizations that stand with hunters to protect what we so cherish so wildlife and its habitat thrive into the future.