How to Access Hunting Opportunities on U.S. Military Bases

One of the most popular reality TV stars is Gordon Ramsay of “Hell’s Kitchen” Fame. Ramsay made his name by being an outspoken, passionate, sometimes brutal, gourmet. Whatever you may think of his cooking or his antics, hunters may be surprised to learn that one of his shows demonstrates his willingness to capture, kill or otherwise procure his own game meat and prepare it, start to finish—from hunt and harvest to helpings on a plate. He has hunted deer in India, caught and cooked puffins in Iceland and noodled for catfish in Oklahoma. One must respect his recognition of the fact that at the foundation of cooking is the life-and-death struggle of nature.

One of Ramsey’s YouTube videos that caught my attention was his attempt to hunt feral hogs at Fort Benning, Ga. Home of the U.S. Army Infantry School, Ranger Training, Maneuver Center of Excellence and other units. Fort Benning is also home to an ever-expanding feral hog problem. So much so, that there was a bounty on hogs when Ramsay’s show was produced. Watching the hog hunt raised a question: “Can you really hunt on military bases?” The answer is a resounding “Yes!” 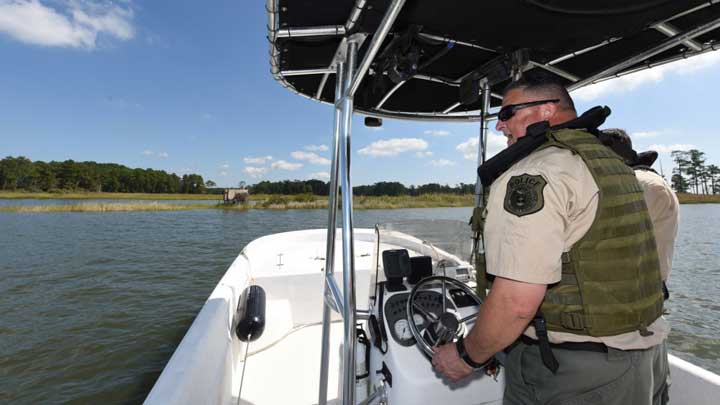 The U.S. Military operates on and occupies nearly 25 million acres across the country. Many of those acres are prime wildlife habitat managed in cooperation with local, state and federal partnerships to preserve habitat and manage species. As with other areas, hunting is a key management tool. The military provides opportunities for active duty, retired and disabled service members, and even civilians, to hunt and fish where they are stationed and where they live. In fact, the Sikes Act of 1960 recognizes the value of military lands to the conservation of our natural resources. It ensures vital ecosystems are protected and enhanced while allowing military lands to meet the needs of military operations through Integrated Natural Resources Management Plans.

A good example is Joint Base Langley-Eustis (JBLE) in Virginia, where hunting opportunities have been available since the law passed. According to Adam Priestley, Fort Eustis Wildlife Field Biologist and Hunting Program Manager, the program’s purpose is to “afford recreational hunting and fishing opportunities for military personnel, dependents, retirees, civilian employees and the general public. The program provides these opportunities equitably with hunter and community safety as the top priority.” Participants can hunt whitetail deer, small game, waterfowl and turkey in designated areas on the base.

Hill Air Force Base in Utah also offers military and civilian personnel opportunities to hunt mule deer. Hunters must apply for and draw a deer tag from the state’s annual pool as well as register and draw for the opportunity to hunt on base. Fishing is also available on base. Nick Brown is a U.S. Fish and Wildlife Service (USFWS) biologist, a civilian, stationed at Hill. “When I was going to school, I never thought I’d spend my career as a biologist working on an air force base,” he said.

Formerly, a great deal of the management was handled by outside contractors but by working through the USFWS and other federal agencies, projects, communication, funds, etc., all can be handled agency-to-agency, which Brown says makes things more efficient. 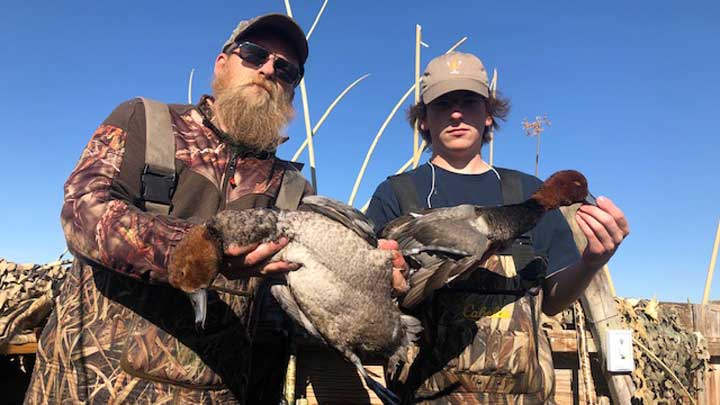 John Gorham, a hunter residing far from hunting options in Southern California, and his son, Nicholas, harvested a pair of redheads on Edwards Air Force Base in Kern County, California. (Image courtesy of John Gorham.)

Of course, working on a military establishment has some challenges—like keeping deer out of the landing path of F-35 fighter jets. “That is an extremely rare occurrence and only happens if a gate gets left open—very rare,” said Brown.

The challenge at Fort Benning was feral hogs. As noted repeatedly on the NRA Hunters’ Leadership Forum website and other hunting media outlets, the damage hogs create is well documented. Hunting provides a cost-effective way to manage populations whether it’s hogs at Fort Benning, Ga., or deer at JBLE. “The Hunting and Fishing Program assists with monitoring of wildlife diseases and parasites, wildlife management and community safety,” Priestly said. “The program has helped the installation reduce vehicle-related deer collisions by 80 percent.”

As can be imagined, hunting on an active military base requires additional attention to safety and security to protect national defense assets. So, be prepared for background checks, safety programs and other measures. Additionally, members of the general public often must be accompanied by someone stationed on or assigned to the base where they plan to hunt.

The process is managed online by the website iSportsman.net, a web-based system used at DOD facilities to manage recreational hunting and fishing. Here, individuals (including the general public) can register for the program and find a list of bases where hunting opportunities exist. They can also find any regulations specific to individual facilities and contact information.

Such programs are important. For example, a service member for whom hunting was important before joining the service can continue to feel the tie of continuity from pre-service life, to days in uniform, to life after leaving active duty. Says Priestly at JBLE, “It provides opportunities for the service member to enjoy the camaraderie of other like-minded individuals who chose to serve in the defense our nation and who enjoy the outdoors.” 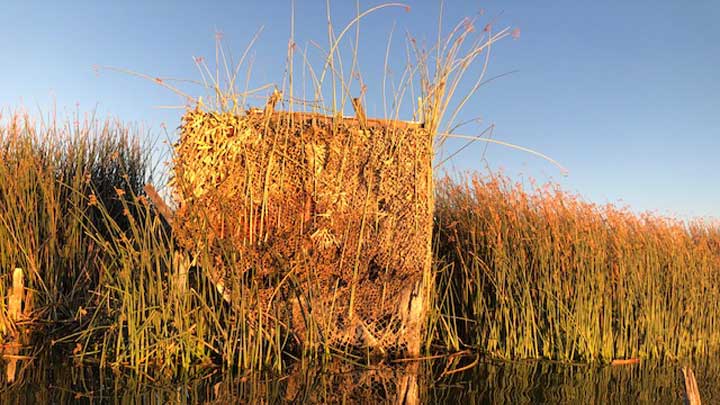 Blinds at Edwards Air Force Base are selected in drawings at the beginning of each waterfowl season. “Owners” are then able to modify and customize the blinds as they wish. (Image courtesy of John Gorham.)

By all accounts the programs are successful. At JBLE, Priestly reports, “Hunters spent more than 8,500 hours afield during the 2019-2020 hunting seasons…Comments from participants are positive and as a result of word-of-mouth experiences, the 2019 hunting season set a new permit sales record.” Nick Brown sees equal success at Hill Air Force Base where there are always more applications than there are permits. So the base works closely with the Utah State Department of Wildlife Resources to manage the deer herd and increase opportunities.

John Gorham is a hunter from southern California who says it can be challenging to find hunting opportunities in the crowded Golden State. Looking to hunt waterfowl, Gorham explained, “A lot of people hunt down at the Salton Sea (nearly a three-hour drive), or at San Jacinto Wildlife Area (more than hours away) or they hunt at private clubs, but that’s expensive.”

Nearly a decade ago, a couple of Gorham’s retired military friends invited him to join them to hunt ducks at Edwards Air Force Base (AFB). A series of ponds sit on the base and are filled by a Lancaster, Calif., water treatment plant. The purified water runs from the plant into this oasis in the High Desert attracting a variety of waterfowl in the Pacific Flyway. Prior to the season, those qualified to apply for one of the several dozen hunting blinds available are divided into five groups. The highest priority is given to disabled veterans, combat veterans and high-ranking military personnel. The lowest priority group is unaffiliated civilians. As the drawing takes place, “winners” select which blind they want from those remaining. Gorham is a civilian. Normally he would be in one of the low-priority groups but because he spent at least 24 hours on volunteer projects in the marsh, he was moved up to the second-highest group and selected a favorable blind on an island in a deep section of one of the ponds. 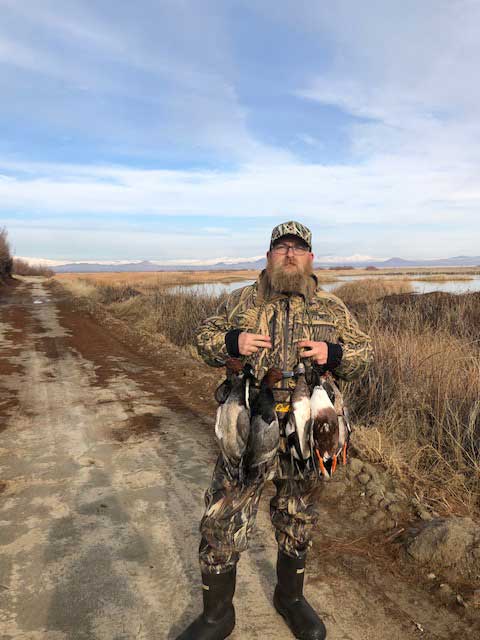 Once you have chosen a blind, it’s yours for the season. “You can modify it; do whatever you want to it but move it,” said Gorham. However, the days you don’t hunt your blind, it is available to other hunters who didn’t get a blind or didn’t participate in the draw process.

Reservations and notifications are, as for other installations, handled through iSportsman.net.

Though perhaps a bit more complicated, hunting at Edwards AFB offers something few hunters ever experience—a stealth bomber coming into your decoys. Gorham and his guests hunted on New Year’s Day this year—the same day as the Parade of Roses and Rose Bowl in nearby Pasadena. The base provides a fly-over for the parade so Gorham got to watch the stealth bomber take off near their hunting grounds and land after it had finished its celebratory duties. They’ve also had C-130s come in close, along with various fighter jets that broke the sound barrier as they were hunting.

For Gorham, the seeming additional hassle is well worth the effort. Without Edwards AFB, his chance to hunt would drop drastically. The base provides the added benefit of being able to include his children and pass on the hunting tradition. Clearly, cooperative management on our nation’s military bases provides all hunters, military and civilian, with hunting opportunities and goes far to promote hunting’s future.

About the author: Alan Peterson is a filmmaker living in the paradise between the Wasatch Range and the Great Salt Lake. He loves shooting over his Pudelpointer, Trigger; casting dries for cutthroats, and seeing cupped wings over decoys. All of this is only possible because of a very patient wife. Peterson is presently working on a documentary on the history of duck hunting on the Great Salt Lake and one on the life of fishing innovator, George Gehrke.