Hunter funding helps to ensure the future of wildlife conservation, yet hunters are increasingly under attack by animal rights extremists and hunter numbers have declined in recent years. Tasked with saving the future of hunting and wildlife conservation, hunters should seize the opportunity to remind folks that just one role they play—in addition to aiding the economy—is the management of invasive species, which present a major conservation problem. If invasive species aren’t controlled, they ultimately destroy agricultural crops and habitat, including habitat necessary to the recovery of threatened species.

For just one example, the American Bird Conservatory recently reported that 2.9 billion familiar adult birds, including sparrows, warblers, finches and swallows, have been lost from the United States and Canada, and that 90 percent of them represented just bird families. Habitat loss, including resource extraction, is cited as the biggest overall factor in addition to farming and development, pesticides and climate change.

Losing nearly 3 billion birds in North America is noteworthy but is not something new. When passenger pigeons became extinct, 3 to 5 billion birds of a single species disappeared from the continent. Some were killed by hunters for food, but loss of nesting and roosting sites and commercialization of hunting were what killed off the species.

Today approximately 657 million acres of U.S. wildlands are managed by state and federal government agencies. Others are privately owned. About 9 percent of the wildlands are in the wildlands-urban interface, where cities, suburbs, forests and parks are adjacent to each other. Not only birds and animals need wildlands, but humans also do. This is why we should be saving wildlands and increasing them, as well as creating more parks and recreation areas while giving credit for such efforts where it is due.

Examining Invasive Species’ Impact
A National Wildlife Federation study reports that 42 percent of all threatened or endangered species are at risk due to invasive species. I’m reminded of this daily as flocks of Eurasian collared doves and starlings pass by my home. Here are just a few examples of invasive species that affect our ecosystems and native species.

Bird Species
English Sparrow: Also referred to as house sparrows, the species came from Europe and is now one of the most common birds in North America.

Starling: Introduced from Europe to North America in 1890–1891, the birds exceed a population of more than 200 million nationwide and compete with native species.

Pigeon: Also known as rock doves, pigeons are distributed in nearly all urban areas worldwide and are considered the world’s No. 1 pest-bird problem. An estimated 400 million roam worldwide and the population is growing rapidly together with increased urbanization. Not native to North America, the species was introduced in the early 1600s. City buildings and window ledges mimic the rocky cliffs used by the bird’s European ancestors. The population of pigeons in New York City alone is estimated to exceed 1 million. They cause loss of habitat for native species and are considered a health hazard.

Animal Species
Wild Boar and Pigs: There were no pigs in the United States when Columbus arrived in America in the late 1400s. Then wild hogs and feral hogs, which weigh up to 500 pounds, were introduced from Europe and released into areas for hunting. Wild boars are smart. They broke out of pens and fences and headed for open territory on farms and natural areas. Some now dwell in suburban areas. Through the years, domestic pigs also escaped and connected with wild hogs. Have you ever seen an area where wild pigs have set up shop? They dig up, eat and destroy plants. Today there are 6 to 9 million of them nationwide, with 3 million said to be in Texas alone. 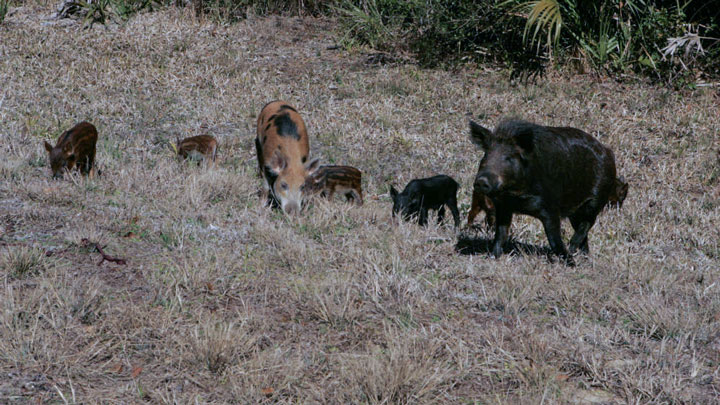 Nutria: This 16-to-22-pound web-footed, semi-aquatic rodent lives in burrows on the banks of stretches of water and feeds on river plant stems. Originally from South America, they are now found in all 49 mainland states. They have more than one litter a year and severely reduce overall wetland biomass resulting in the conversion of important wetlands to open water. The species is raising havoc over crops such as rice in the California central valley, costing millions to control its populations. Nutria, incidentally, are edible and their furs can be used in clothing.

Fish Species
The German carp was introduced into the Great Lakes in the 1800s, taking over a significant part of the food chain. Now Asian carp, brought from Asia to be raised on fish farms, has invaded many lakes and rivers. As it works its way into the Great Lakes, it is pushing out native fish species.

Reptile Species
A prime example is the Burmese python. Spanning up to 14 feet, these snakes were imported as pets and then released. Now thousands roam the Florida Everglades and nearby areas including Florida’s Big Cypress National Preserve. As documented by the NRA Hunters’ Leadership Forum website, NRAHLF.org, Florida now holds Burmese python challenges to attract hunters in efforts to control the invasive species, which is larger than native snake species. While it is tough to know the precise number of Burmese pythons roaming the region, it is well known that area raccoon populations have declined, and bobcat populations are said to have dropped by 87 percent. Deer and bird numbers also are declining. In fact, in February, NRAHLF.org reported that the Florida Fish and Wildlife Conservation Commission and the South Florida Water Management District had stepped up python removal efforts with the Florida Python Challenge 2020 Python Bowl. Offering prizes and other incentives, the 10-day event drew 750 hunters from 20 states resulting in 80 invasive Burmese pythons being removed from the Florida Everglades.

Addressing the Native Species Factor on Ecosystems
While invasive species are a problem, some native species also are causing issues, including damage to habitat.

Whitetail Deer: No. 1 on this list is the whitetail deer. In 1930, there were about 300,000 whitetails nationwide. Today there are 30 million. In addition to damaging habitat due to overpopulation in some areas, they can spread diseases like chronic wasting disease (CWD) that many wildlife biologists worry could spread to livestock or even people.

Snow Geese: This species breeds along the Arctic Ocean shores and migrates south every winter. Numbering more than 15 million, it is destroying nesting habitat for a variety of other birds while gobbling up grains in farmers’ fields farther south. The daily limit for geese in California this year is 20 snow geese and 10 dark geese in efforts to curb populations.

Canada Geese: Once scarce and considered threatened, Canada geese now number more than 3 million. While the birds seek grassy lands with agricultural crops, they frequent urban areas in parks and people’s yards, where they pollute water and consume plants. They also are dangers for planes landing on airfields.

Moral of the Story
Both invasive and native species affect our ecosystems. Fortunately, hunters go far to keep them in check. Hunters should be given credit for what they do in terms of population control. They must do a better job of telling non-hunters how hunter funding continues to cover the cost of wildlife conservation and habitat enhancement. If you’re a hunter, promote the hunter’s role in both native and invasive species management through legal, regulated hunting.