Mountain Goats: A Wilderness Icon On the Way Out?

Few images represent rugged mountain wilderness like the image of a wooly white mountain goat perched on an inaccessible crag, almost suspended in air, surveying near vertical reaches that few mortals ever traverse. A goat represents the almost unattainable pursuit and challenge of wildness.

Oreamnos americanus (from the Greek for “mountain nymph” or “mountain lamb”) is the only living species from the genus Oreamnos. What related fossils of the species that have been discovered are only from North America and differ very little from today’s living animals. Its historically recent range stretched from the Chugach Mountains in Alaska to the Rockies and Cascades of northern Washington, Idaho and Montana. In the last 100 years, these nimble nymphs of the mountains have been introduced into areas of Utah, Nevada, Oregon, Colorado and South Dakota. Additionally, populations have been introduced into Olympic and Grand Teton national parks in Washington and Wyoming, respectively.

It is in these two parks that the story of the mountain goat has come up against its own success.

Beginning in 1925, over a four-year period, roughly 12 goats were released in the Lake Crescent area, prior to the establishment of Olympic National Park in 1938. Over the nearly 100 years that the animals have been in the park area, their numbers have swelled to more than 700. Park officials say the animals have been detrimental to the alpine environment not originally meant to support goats. They also report that mountain goats have also become a hazard to tourists as they have lost their fear of humans. In 2010, a 63-year-old visitor to the park was gored by a goat and bled to death. Underlined by the question of the goats being non-native, the park began a translocation project that has seen 325 of the goats removed. The vast majority has been successfully transported to the Cascade Range where the goats are native and whose numbers have been in decline recently. The goal is to remove the entire population from Olympic. Though efforts have been made to translocate more of the goats, other federal and state agencies, zoos, etc. apparently have all they need. So the remaining goats will be removed by contracted marksmen in helicopters.

In Grand Teton National Park, fears that non-native mountain goats would possibly introduce disease to the area’s struggling herd of native bighorn sheep drove a similar removal effort that was begun in February 2020. In just four hours, 36 of the park’s estimated 100 goats were felled by a contracted rifleman from a helicopter.

Grand Tetons’ goats filtered north from Idaho’s Snake River Range where they were introduced in the 1960s and ’70s. The existence of this species in the park began to be reexamined in light of the National Park Service’s mandate to manage parks with native species taking priority and was given increased urgency because the park’s mountain goats were confirmed to host pathogens that could lead to deadly pneumonia in the delicate bighorn herd. 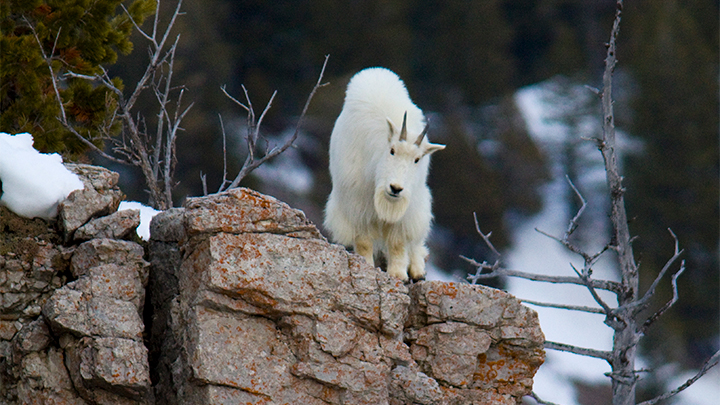 However, the aerial shooting was halted by the Department of the Interior because of objections from Wyoming state officials. Gov. Mark Gordon wanted to find a solution that would allow citizens to be a part of the management program, according to Wyoming Game & Fish Public information officer Sara DiRienzo. “The goal to reduce non-native goats is a goal shared by Wyoming Game & Fish. But the method of reduction was not. Gov. Mark Gordon was very grateful when they called off the aerial hunt allowing the public to get involved.” Thus began a collaborative process between Grand Teton National Park and Wyoming Game & Fish that led to a program that allowed “skilled volunteers” (hunters) to participate in the effort to bring the park’s goat population to zero.

Parties applied to a draw that allowed hunters to harvest as many mountain goats as they could between August and November 2020. Teams, consisting of at least two individuals, had to apply and, eventually, the teams had to pass firearm proficiency tests (three of five shots in an 8-inch circle at 200 yards) and complete training in proper use of bear spray and park-provided GPS and tracking equipment. This effort led to the removal of 43 mountain goats in the four-month period. Overall public feedback has been very positive. Says DiRienzo: “The public in Wyoming is very involved with wildlife management and wanted to be involved with this. Being able to be involved as a skilled volunteer was wildly popular. That goes right along with the North American Model for Wildlife Management; the public has a role to play. We are grateful we have such a good relationship with Grand Teton to work together to find a solution to a common goal—it’s a perfect example of success and collaboration.” The remaining goats (approximately 20) will be removed by aerial gunning for safety and efficiency.

Unlike Wyoming trying to reduce its population of non-native goats, Utah has expanded its goat population. Utah’s original six animals came from the Olympic National Park herds in 1967. Today, Utah is home to roughly 2,000 goats, however, plans to further expand the herd are on hold as the various stakeholders jockey over the impact of mountain goats on the alpine landscape. The most recent controversy involves the 2013 and 2015 releases of goats into Utah’s isolated Las Sal Mountains near the Mount Peale Research Natural Area.

Opponents contend that the non-native species does not belong in Utah’s mountain ranges. They also argue that, because the goats expand into federal land (particularly, sensitive areas like Mt. Peale RNA), there is a question about who has the authority to manage the goats. Presently, courts have sided with the state’s authority to manage wildlife within its boundaries. 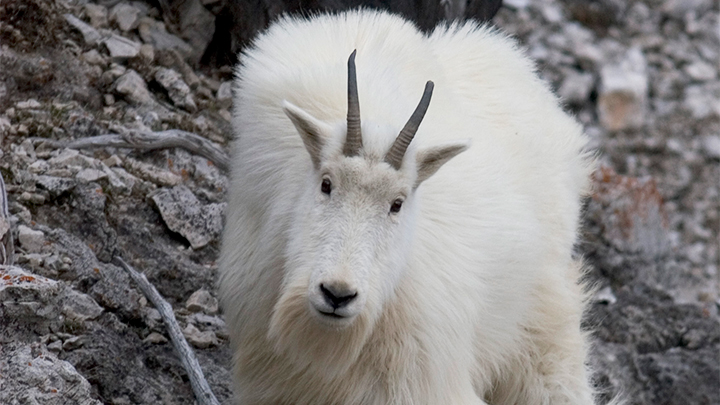 Covy Jones, big game coordinator for Utah’s Division of Wildlife Resources, has studied the mountain goat issue intensely. “We are always asked, ‘Show me that they were native.’ A lot of information points to mountain goats inhabiting the Wasatch Front at the time of settlement.” As a proponent for goat introductions, he counters the non-native argument with fossil remains from a mountain goat ancestor in Nevada and Forest Service sightings of goats in Utah in 1917, immediately after which the state legislature moved to protect goats. Jones references further sightings from road crews in the Utah backcountry in the early part of the last century. “Prior to the last glacial event, mountain goats spanned the breadth of the continent,” he asserts.

Jones seems to appreciate the concern over habitat degradation. “Without control measures, mountain goats can do damage,” he says. “Managing goats at appropriate levels is important to habitat and herd health.” Utah’s DWR has worked closely with the U.S. Forest Service to closely observe and record mountain goat impact on the La Sals since the goats were introduced in 2013. A new report on those observations is expected this year that will guide future management decisions.

The Utah DWR biologist believes proper management is the key. In places like Olympic and the Tetons (national parks where hunting is not allowed), wildlife managers are stripped of one of the most important management tools available: hunters. As in Wyoming, “skilled volunteers” or everyday license and permit holders, as in Utah, can help keep not just mountain goats but all species vital and thriving at population levels that can be successfully supported by the habitat.

“Mountain goats were protected by the legislature because they are valued by the hunting and wildlife-appreciating public.” That protection includes a legal mandate to “manage habitat and animals to protect and propagate them,” says Jones. For now, however, he believes future introductions of mountain goats will wait. “Do we want to force it? No. We want to wait until we can build partnerships. We don’t see it in the foreseeable future. We have open and vacant habitats for goats in the state. We need the support of the local communities in order to do that (introduce more goats).”

As in the situation in Grand Teton National Park, where hunters were a part of the solution, Covy Jones insists hunters are crucial to the future of Utah’s mountain goats. “Hunters are the key funding source. Through license sales, permit sales and conservation tags, we are able to fund [aerial surveys], monitor and maintain herds, do transplants, etc. The revenue they provide is key to successfully managing populations. They are also a voice to say they want goats, they value them, and can help support efforts to keep goats.”

Though their specific herds and wilderness locations will change—increasing and decreasing with more management knowledge and experience—it is certain the “mountain nymph,” that mythic icon of rugged wilderness, is here to stay.