With waterfowl seasons over and turkey season not yet here, game-chasers like me are itchy to get back into the outdoors, but don’t forget there are other hunts you can do in the meantime. With a little research and maybe a phone call or two, you can discover opportunities to satisfy your hunting passion and keep the freezer stocked 365 days a year by hunting invasive, or non-native, species.

Invasive species have infiltrated nearly every corner of the Northern Hemisphere. Whether they were intentionally released, or they escaped or they hitchhiked, most of them have worn out their welcome. State and federal agencies, businesses and private-land owners are now spending time and money to control these species. Very often, a hunter can help solve their problem and do it for free. Here is a list of species that offer year-round hunting opportunities. Of course, be sure you are thoroughly familiar with local laws and get landowner permission when considering a particular hunting location.

Eurasian Collared Doves
Originating around the Bay of Bengal, the Eurasian collared dove made its way through Asia, across the Middle East and into Europe. According to one story from the early 1970s, several birds escaped from a pet store in the Bahamas and ended up in Florida. Now they are found throughout North America. More likely to be found in suburban areas or farmland, they feed on waste grain and other seeds. Larger than a mourning dove, they are distinguished by their square, white-edged tail and black stripe across the back of their neck. Hunting them is similar in most respects to hunting mourning dove in that they respond to decoys and frequent water and feed locations on a regular schedule. Collared doves are great eating and are larger than other doves. It's tough to beat bacon-wrapped dove poppers on the grill. Greater success can often be found by locating a cattle or dairy operation where waste grain is easily found. Gaining permission is often easy because pests eat up expensive grain meant for cattle and other farm animals. By removing the freeloaders, you’re freeing up food for those animals. In most locations, there are no season or bag limits. Many states don’t even require a license to hunt these foreign invaders.

Pigeons
Ubiquitous and rarely protected, pigeons and starlings are often found in the same locations you find collared doves, making for multiple opportunities on the same hunt. These birds ravage grain stores like feedlots and silos. If a pigeon eats between 2-4 ounces of grain a day, 25 pigeons could consume nearly 6 pounds of grain every day. Over time, and with greater numbers, you can see why they are referred to as “pests,” and why farmers might be happy to have your assistance. I’ve even had instances where farmers offered to buy the shells for getting rid of these birds. Make no mistake: Pigeons can be a challenging quarry. Opt for No. 6 shot rather than No. 7½ or 8. Pigeons are fair eating and used to be called “squab” in restaurants. Like collared doves, most locations do not manage pigeons, which can be taken without concern for bag limits, seasons or licenses.

Iguanas and Pythons
Two other critters that first gained fame in Florida and have attracted a great deal of attention are green iguanas and Burmese pythons. They have since moved north and west where climates stay warm enough for these cold-blooded reptiles. Pythons eat anything they can get their mouths around and have devastated native bird, mammal, reptile and amphibian populations. They can be hunted 365 days a year on private lands without a license and there are no bag limits. They also can be taken on 25 state-run wildlife management areas. There are some restrictions on state lands relative to method of take but there are no seasons or bag limits. The Florida Wildlife Conservation Commission encourages everyone to remove these destructive snakes when possible. Since March 2017 more than 4,000 invasive Burmese pythons have been removed from the Everglades subtropical wilderness in southern Florida. You can even apply to be part of a “Python Action Team” and get paid for your removal efforts.

Green iguanas showed up in Florida in the ’60s. They have since made themselves right at home. They are destructive to fruit and vegetable crops, and they also destroy seawalls, dikes and canals through their digging and burrowing behavior. The same rules apply to iguanas as pythons. And, of course, like every other unusual table fare, “they taste just like chicken.”

An important note is that Florida law specifies that even unwanted species like Burmese pythons and green iguanas are protected by animal cruelty laws. As hunters, of course, we work to kill our quarry quickly and humanely.

Nutria
A semi-aquatic rodent species originally from South America that is wreaking havoc in Gulf Coast states, the Chesapeake, lower Mississippi, and the Northwest is the nutria, a large orange-toothed, muskrat-looking critter that can weigh as much as 20 pounds. Under the right conditions, biologists say that a single pair of nutria can produce more than 16,000 offspring in three years. Introduced for the fur trade between 1899 and 1930, nutria escaped and were released into an environment with no natural predators and are now found in nearly 20 states. Nutria burrow and destroy water management structures, eat up to 25 percent of their body weight in valuable marshland vegetation, and can carry tuberculosis and septicemia. This is a creature people want to see removed, and hunters can help. In Louisiana alone, a quarter of a million nutria were harvested in the 2018-2019 season. Louisiana, for example, has a trapping and hunting program that can provide a bounty on each nutria taken. Texas requires a license and has other limitations, but the season is year-round. Other states like Oregon have no seasons or bag limits. And, of course, the critter tastes just like chicken.

Hogs
Not much needs to be said about feral hogs. This destructive and delicious beast is here to stay. Their destructive habits lead to mind-boggling damage figures. According to the USDA, “ … this invasive species costs the United States an estimated $1.5 billion each year in damages and control costs. Feral swine also threaten the health of people, wildlife, pets and other domestic animals.” According to one NRA article, “research suggests the average pig causes $200 in damages annually, though the actual figure likely is even higher.” 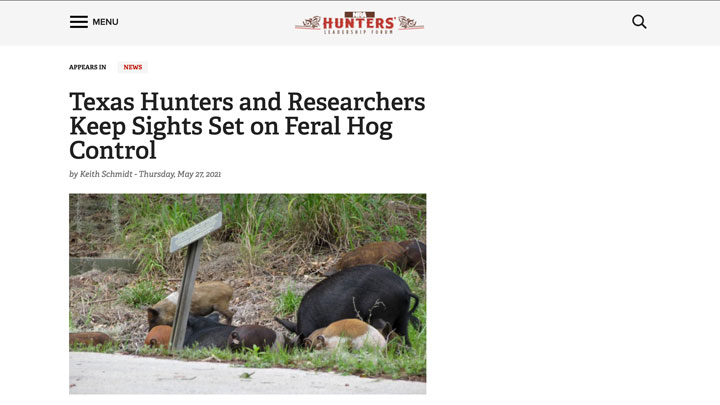 No wonder a hog hunt is one of the least expensive hunts you can undertake, particularly in Texas, which houses more than half the nation’s hog population. Or you can go “whole hog,” and pursue them from helicopters with AR-platform shotguns. There is a way to adapt a hog hunt to suit just about any hunter’s age, ability or budget.

Exotics
You don’t have to go to Africa to go on safari. Several states manage healthy populations of non-native, or exotic, big-game species that used to be available only after spending two days in airports and on planes to reach the “Dark Continent.” Non-native or exotic species are not subject to the typical hunting seasons and bag limits of native wild-game species and are available to hunt all year. Texas leads the charge in offering opportunities to hunt exotics, with outfitters offering everything from the regal, spotted axis deer (as shown in the opening photo) to blackbuck, kudu, sable, wildebeest and more. Speaking of axis deer, which was introduced into Texas in the 1930s, all you need is a hunting license to be able to take them year-round. Another popular Texas opportunity is the aoudad, also called the Barbary sheep, that was introduced in the 1950s and now competes with the state’s desert bighorn populations.

A Note on Coyotes
No article on year-round hunting opportunities should go without mentioning the option to pursue coyotes. Native to North America, this species is responsive—not invasive—and represents one of Mother Nature’s most familiar and adaptable creatures. Found just about everywhere, from deserted deserts to Rodeo Drive in Beverly Hills, coyotes have dug in and not only survived but thrived. As this NRA website notes, the species’ range and numbers make for year-round hunting opportunities. Many states even provide a bounty on coyotes. With their speed, extraordinary sense of smell and eyesight, and uncanny instincts, coyotes are a challenge to hunt. They also provide an opportunity to practice long-range shooting skills and can help prepare you for other big game hunts.

So, while we often yearn for spring and fall hunts to roll around, remember you can sidestep the doldrums. There are plenty of opportunities to get out there and help control unwanted pests and add to your stock of wild game. Because of invasives, there is no reason you can’t scratch that hunting itch all year long.