Antelope Island stands as the largest of the three islands in Utah’s famous inland sea, the Great Salt Lake. Isolated from the bustling metropolis of Salt Lake City, it remains wild, though within 30 minutes of travel time from 1.8 million people. Since 1997, the island has been home to a thriving herd of bighorn sheep, a testament to the species and the state’s efforts to enrich hunting and wildlife viewing opportunities. However, in November 2018, the island became the site of a devastating tragedy. But, more importantly, in the aftermath it has become a prime example of public and private groups coming together to save wildlife.

Historically, bighorn sheep were the most common big game species in Utah. Pre-historic rock art in southern Utah shows animals with curved and curling horns more frequently than any other animal. In 1776, the Dominguez-Escalante Mission recorded, “Here wild sheep live in such abundance that their tracks are like those of great herds of domestic sheep.” At the time of settlement, estimates noted that approximately 100,000 roamed the state. By comparison, it is estimated that only 5,000 mule deer were found compared to today’s estimate of 350,000.

With settlers into Utah came their cattle and sheep. With those sheep came foreign diseases that native bighorns could not withstand. In addition to habitat loss and human expansion, disease decreased bighorn herds to the point of eradication by the 1960s. Only in remote areas of the desolate Colorado and San Juan River regions did small herds remain. In 1966, the first bighorns (Rocky Mountain subspecies) were translocated to Northern Utah. It would be six more years before desert bighorns were reintroduced. Now the Utah bighorn herd numbers approximately 4,400 animals.

Wiped out on Antelope Island by the early 1900s, bighorns were reintroduced in 1997. Jace Taylor, then the bighorn sheep biologist for Utah’s Division of Wildlife Resources (UDWR), now a biologist for the U.S. Fish and Wildlife Service and stationed at Utah’s Hill Air Force Base, describes the importance of the Antelope Island herd. “The bighorn sheep herd was an invaluable resource for the reestablishment of Rocky Mountain bighorns in Utah,” he explained. “Originating from only 29 bighorns, the previous herd had grown in excess of 200 animals multiple times and provided nearly 250 bighorns for translocation. Past translocations have resulted in the establishment of multiple new bighorn herds in Utah that account for more than 600 bighorn sheep and dozens of hunting permits annually.”

But in November 2018, two collared bighorns died in an alarmingly short period. Biologists investigated and found more dead and dying animals on the island. Testing confirmed that pneumonia had infected the herd. Recounts Covy Jones, the big game coordinator for UDWR, “We caught it at the front end of a disease event and didn’t know how virulent it would be, but we knew they couldn’t be transplanted. This source group was the backbone of success in the state and now we couldn’t use this great resource.”

Given the extreme susceptibility of bighorns, biologists could no longer use the herd for expanding Utah’s bighorn population. They also could not risk augmenting the depleted herd. At times pathogens will infect animals without killing them as they spread the disease to the rest of the herd or to newborn lambs. UDWR had to cull the entire herd. This was especially difficult for Taylor, who said, “I personally earned a master's degree studying this specific bighorn herd and could hardly imagine eliminating the very animals that I had spent thousands of hours observing.”

Because of Antelope Island’s isolated location, it provides an unparalleled place to raise a healthy herd to use for translocating animals. Plans to restore the herd began and, because of a highly serendipitous set of circumstances, Antelope Island would soon see bighorns roaming its peaks again.

Before the Antelope Island tragedy, sheep hunter Brendan Burns, chief hunting officer and director of conservation for technical hunt clothing manufacturer KUIU, had been wondering how KUIU could make a direct impact on conservation. KUIU customers also mentioned they were looking for opportunities to contribute to conservation and see the tangible impact of their donations. At the same time, Travis Jensen, president of the Utah Wild Sheep Foundation, was reaching out to KUIU to develop a relationship to support Utah sheep conservation efforts. He and Burns began looking for ways to work together.

Burns had worked closely with the Rocky Boy’s Reservation of the Cree and Chippewa Native America Tribes in Montana to manage their bighorn sheep. In 2017, the herd was reaching management number goals and would soon have excess animals. Burns pitched KUIU and its clients on creating an opportunity allowing KUIU customers to contribute to a project that put 100 percent of the money on the ground. Could they fund, plan and execute the translocation of sheep from Rocky Boy to a sheep-ready locale?

Burns first reached out to contacts in Utah, including Jensen and Taylor, but Utah’s Antelope Island “nursery herd” was doing well so it passed on the offer. However, North Dakota was ready to accept the offer. The move was planned for the winter of 2019, but bad weather made moving the sheep impossible. It also was too late in the lambing season, so it was postponed.

Then came Utah’s terrible news. When Taylor shared what happened, Burns saw an opportunity to try and do in one year what might otherwise take many years.

If you know anything about sheep hunters, you know that words such as “hard,” “impossible” and “it can’t be done” are like a red cape in front of a bull. The goal was to deliver two groups of sheep to two different locations—North Dakota and Utah—in the same season, which never had been done.

KUIU took care of locating, purchasing and transporting 55 sheep. Half of the expenses were paid for by 16 KUIU customers and half by KUIU. Nothing went to overhead. The money was all handled by Mike Boutin and the Midwest Wild Sheep Foundation. 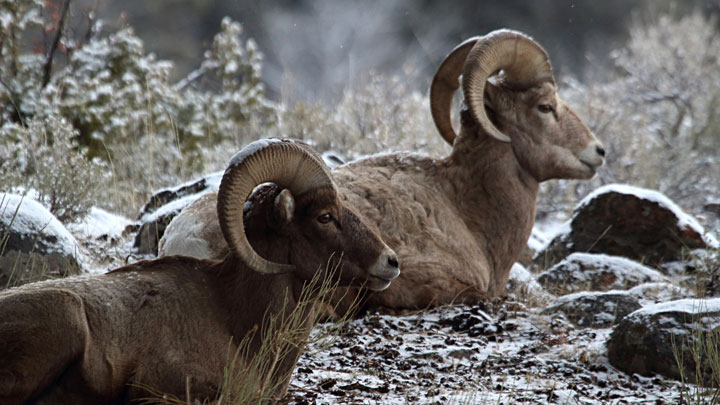 On Jan. 29, 2020, 25 bighorn were introduced on Antelope Island—the culmination of an unprecedented effort spearheaded by a private group. The day before, the 30 sheep for North Dakota hit the ground and sheep returned to the Badlands.

Taylor compares the sadness felt earlier at the fate of the Antelope Island herd with the day of the new sheep release. “It was an incredible accomplishment for everyone involved to be able to reestablish the bighorn population on Antelope Island only a year after losing the entire herd,” he said. “I do not know of a reestablishment that has been executed in such a short time, which is especially impressive considering the complexity of the task.”

Utah Wild Sheep Foundation’s Jensen reminisces on how the transplants are the culmination of the work that Burns, KUIU, the WDWR and his organization put into the project. “It’s fantastic for our volunteers and reinforces everything our organization has done and continues to do to fulfill our mission statement,” he said. “There is no better way to show what we do. There is nothing like seeing a trailer door open and 25 sheep run up on the mountain.”

Both groups of sheep are doing well. The 40 ewes transplanted were pregnant and have birthed many lambs. There are now more than 90 sheep from the original 55. All sheep transplanted in Utah received a radio collar, allowing biologists to monitor them 24/7.

“This kind of thing can’t happen without our dedicated customers and volunteers,” Burns said. “We are so grateful that KUIU has such passionate supporters willing to make the sacrifices to see sheep herds thrive.”

The future of Antelope Island’s bighorns is much brighter than it was a short time ago. Management objectives are to increase the herd to 125 animals, though much depends on variables including reproduction, disease and drought. However, Jensen reports that with 30 to 40 new lambs experiencing a 70 percent survival rate, the hope is to start capturing and transferring animals off the island in the next three years.

Summarizes Jace Taylor, “There are endless challenges for bighorn sheep that will always make them difficult to manage, but the Utah Division of Wildlife Resources goes to incredible lengths to maintain healthy herds in Utah … .” UDWR will continue to work closely with partners to manage for healthy herds.

Once again, thanks to the cooperation, passion and commitment of hunters and biologists, conservation is the winner, and Antelope Island is again home to Utah’s bighorns. In wrapping it all up, KUIU’s Burns explains, “I can’t save all the sheep in the West, but if you try hard enough you can get something done.”

About the Author
Alan Peterson is a filmmaker living in the paradise between the Wasatch Range and the Great Salt Lake in Utah. He enjoys shooting over his pudelpointer, Trigger; casting dries for cutthroats and seeing cupped wings over decoys. He says it is all possible thanks to his very patient wife. Peterson is currently working on a documentary on the history of duck hunting on the Great Salt Lake and one on the life of fishing innovator George Gehrke.