Saturday, Sept. 25, was a big day for American hunters, shooters and anglers, marking National Hunting and Fishing Day (NHFD) with public officials and organizations hosting NHFD events around the country. The annual celebration not only brings sportsmen together to enjoy our hunting, fishing and target shooting traditions but it recognizes our contributions to fish and wildlife conservation through our licenses, self-imposed excise taxes and other fees we pay to sustain species’ populations and their habitats. In getting into the NHFD spirit, one of the best public salutes to sportsmen was in Idaho where Gov. Brad Little gathered with hunters, anglers and shooters on the eve of festivities on Sept. 24 to officially proclaim Sept. 25 NHFD following his ceremonial signing of a NHFD proclamation.

Speaking to the importance of hunting, recreational shooting and fishing to his home state, Gov. Little said that last year alone, Idaho sportsmen and women generated $60.6 million to support the conservation efforts of the Idaho Department of Fish and Game. “Idaho’s 534,000 hunters and anglers support the state’s economy through spending more than $1.02 billion while engaged in their pursuits,” noted the proclamation. He spelled out other annual benefits of sportsmen’s dollars, adding that they support more than 15,000 jobs and generate $97 million in state and local taxes. As someone who has purchased multiple hunting licenses in Idaho through the years, I appreciate knowing those statistics and know every other state has a similar report.

In the mix with Gov. Little and Idaho sportsmen was shooting enthusiast Aoibheann Cline, Idaho state director for the NRA Institute for Legislative Action. The NRA was one of multiple groups that sponsored a four-person team for the “Clay Buster Shoot Out” that followed, hosted by the Idaho Legislative Sportsmen’s Caucus and Idaho Sportsmen and sponsored by camouflage apparel company Kryptek, co-founded by my friend and combat veteran Butch Whiting, who also participated. In addition to Gov. Little, remarks were given by Ellary Tucker Williams with the Congressional Sportsmen’s Foundation and Benn Brocksome, director of Idaho Sportsmen. First place in the form of prizes donated by Kryptek went to Idaho Legislative Sportsmen’s Caucus Co-Chair Rep. Rick Youngblood’s team.

Participating with the NRA's Aiobheann Cline (second from left) on Team NRA were representatives of the Idaho Department of Fish and Game and members of the staffs of Idaho Gov. Brad Little and Sen. Mike Crapo. Photo Courtesy of Idaho Sportsmen

With hunting and fishing integral to the cultural fabric of communities nationwide, on Friday President Biden followed the tradition of U.S. presidents before him and signed his own proclamation of NHFD 2021 recognizing sportsmen along with a total of 43 state governors. “From the earliest days of our Nation, hunting and fishing have instilled respect for our long-cherished natural resources and American ethic of conservation,” noted the presidential proclamation. “Passed on through generations, these beloved pastimes bring families, friends and neighbors together to bond in the spirit of sportsmanship, cultivate respect for our lands, waters, and wildlife, and provide peaceful sanctuary amid our Nation’s natural wonders.

As reported by this website, Biden’s proclamation also called attention to how hunting and fishing have been especially critical during the COVID-19 pandemic. “The majestic public lands and waters of our country—and our responsibility to serve as good stewards of the natural resources we have been blessed with—are even more appreciated by those who took to the great outdoors as an outlet during the pandemic,” noted his proclamation. “We will continue to rely on America’s sportswomen and men to pass on their love and respect for our lands, waters and wildlife to our children and grandchildren.”

For some history, NHFD was set in motion by Congress in 1971—50 years ago—to recognize hunters’ and anglers’ leadership in fish and wildlife conservation. The day was celebrated for the first time in 1972 when President Richard Nixon signed the first NHFD presidential proclamation, writing, “I urge all citizens to join with outdoor sportsmen in the wise use of our natural resources and in insuring their proper management for the benefit of future generations.” NHFD has been observed on the fourth Saturday of September ever since.

As I’ve written on previous NHFDs, I celebrate sportsmen’s day every year just by doing what I do—picking up my bow and going archery hunting. But for those who want to take part in formal NHFD activities, the NHFD website always has a link to organized events around the country so keep that in mind for 2022 and visit the NHFD website.

While we sportsmen don’t need a day to remind us to celebrate America’s endless outdoor opportunities, I like having a special day set aside to honor our contributions. We hunters, anglers and shooters have quite a track record of leaving our fish and wildlife resources and wild places better than we found them. It was our efforts that established the North American Model of Wildlife Conservation—the science-based, user-pays system regarded as the greatest conservation success story in history. And our funding does not even include the personal time we volunteer to help with wildlife habitat and restoration projects for the benefit of wildlife, hunters and non-hunters alike. So, isn't it fitting that we acknowledge the vital role we play—and that we keep the ball rolling?

While hunting on Saturday, I recalled the words of naturalist, poet and philosopher Henry David Thoreau, who in the 1800s wrote, “I took a walk in the woods and came out taller than the trees.” That’s what answering the call of the wild does for my soul too, Mr. Thoreau. But I also appreciate what astronomer Sir Izaak Newton said 200 years before that: “Nature is pleased with simplicity—and nature is no dummy.” Five hundred years later, who doesn’t appreciate simplicity in a modern world? For me, it means heading into the Colorado Rockies, seeing how the colors have “gone wild,” hearing the bugling bulls and living in the moment. 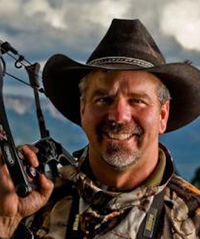