In 2020, the Trump administration’s U.S. Fish and Wildlife Service (USFWS) made a change to the guidelines for submitting artwork in the annual Federal Duck Stamp Contest, requiring that the Duck Stamp—formally known as the Migratory Bird Hunting and Conservation Stamp—contain a hunting element. The change was put in place as a small way to celebrate the extensive contributions waterfowl hunters have made to waterfowl and wetlands conservation. But as NRAHLF.com reported in early August, the Biden administration was considering overturning that requirement and on Aug. 24, the USFWS formally reversed the pro-hunting rule.

In its official announcement, the USFWS explained it was removing the hunting element requirement from future Duck Stamp art submissions beginning with the 2022 Federal Duck Stamp Contest. The USFWS also changed the contest judging requirement mandating that qualifications for selection as a judge include having an understanding of America’s waterfowling heritage and the ability to recognize objects related to waterfowl hunting.

Why the change? According to USFWS, “Since the implementation of the 2020 final regulations, which made the hunting theme a permanent requirement, many stakeholders and artists have continued to express their dissatisfaction with this element being mandatory for all entries. … These revisions provide artists more flexibility when designing their art and broaden the appeal of the Duck Stamp to a more diverse audience.”

The USFWS explains that the 2020 regulations are still in effect for the 2021 Federal Duck Stamp Contest and still require the live portrayal of at least one of the five eligible waterfowl species listed for this year—the greater white-fronted goose, Ross’s goose, blue-winged teal, redhead or king eider—as the dominant feature. It also must include a waterfowl hunting-related accessory, such as a hunting dog or decoy, or a scene that illustrates the “celebrating our waterfowl hunting heritage” theme, all left to the artist’s discretion.

“The waterfowl hunting community is immensely supportive of the Federal Duck Stamp, one of our nation’s most well-known and revered wildlife conservation programs,” said USFWS Principal Deputy Director Martha Williams. “For nearly a century, Duck Stamps have generated more than $1.1 billion in sales used to acquire six million acres of wetland habitats that help address the impacts of climate change, purify water supplies and provide economic support to local communities as they attract outdoor recreationists from many different backgrounds.” 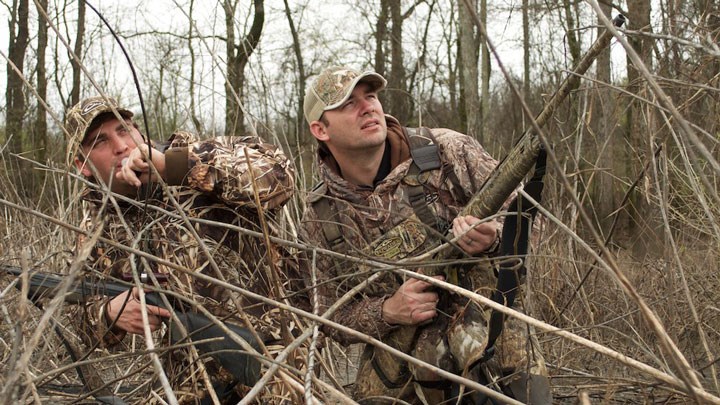 Waterfowl hunters have been the top contributors to this program, as they are required to purchase Duck Stamps to hunt waterfowl. At the same time, collectors, birders and other non-hunters also purchase Duck Stamps to contribute to conservation and/or for the stamp’s artistic value. It also serves as a free pass into any national wildlife refuge that charges an entry fee.

“Historically, there have been hunting themes in past stamps before the Trump administration’s hunting theme requirement,” said John Devney, Senior Vice President of Policy for the century-old conservation group Delta Waterfowl, which has worked to secure the future of waterfowl and waterfowl hunting across North America since 1911. “The 1999 winner, Greater Scaup, features a pair of scaup in the foreground, with a motorboat and what looks like a duck hunter and his black Lab in the background.”

Devney continued, “There’s no question the Duck Stamp has been a huge success, and it is because there’s a direct linkage between hunting and waterfowl conservation. And waterfowl hunting absolutely deserves to be celebrated. But, ultimately, we need to sell as many Duck Stamps as possible to conserve and increase waterfowl habitats.”

As noted by Ducks Unlimited, which has worked to conserve, restore and manage wetlands and associated habitats for North America’s waterfowl since 1937, “Under this rule change, artists should feel encouraged to continue showcasing the stamp's hunting heritage but have the flexibility to express North America's most vibrant and beautiful waterfowl in whatever manner feels most natural,” said Parker Williams, the organization’s Governmental Communications Manager. “The most important aspect of the Duck Stamp is the habitat it ultimately helps conserve, and we hope a growing interest in the program encourages more people—hunters and non-hunters alike—to go out and purchase a Duck Stamp.”

While some in the hunting community might take this change as a slap in the face, Devney pointed out that when the hunting requirement was under consideration, some of the public comments he read from hunters actually opposed it. So, while many hunters praised the new requirement honoring hunters’ contributions to waterfowl conservation, no one rule is ever a slam dunk.

Still, as noted above, while many non-hunters and non-game species benefit from the conservation work the Duck Stamp sales have generated and continue to provide, it is duck and goose hunters who purchase the vast majority, according to USFWS Public Affairs. Of the 1.5 million Duck Stamps sold annually, waterfowl hunters buy between 800,000 to 1,000,000 of them.

About the Author
NRAHLF.org contributor Brian McCombie is a field editor for the NRA’s American Hunter and writes about firearms and gear for the NRA’s Shooting Illustrated. He is a member of the National Rifle Association and the National Shooting Sports Foundation. Brian likes hunting hogs, shooting 1911s chambered in 10 mm and .45 ACP, watching the Chicago Bears and relaxing with his two cats, Peanut Morgan and TigerJoe.