Founded by Mr. Rick Wilson in 1997, Maryland’s Farmers and Hunters Feeding the Hungry (FHFH) began as a ministry of a local church in Hagerstown, Md. Wilson patterned the program after the Virginia Hunters for the Hungry program with the goal of distributing donated game meat to various food banks across the state. Maryland’s deer hunters responded enthusiastically.

“That first hunting season, hunters in our one county donated as many deer to our new program as hunters across the rest of Maryland donated to an existing program being run by the state Department of Natural Resources (DNR),” said Josh Wilson, Rick’s son, who now oversees the larger, nationwide FHFH program. “Dad was invited to Annapolis [by the DNR] after the season and ultimately asked to spread his new program across the rest of Maryland.”

Since its 1997 launch in Maryland, FHFH has grown into a multi-state organization that today includes approximately 90 volunteer coordinators and more than 125 participating butcher shops in nearly 20 states across America. Hunter-donated deer and elk remain the primary sources of meat provided by FHFH to the needy of local communities, though in some places the donations also include livestock from farmers.

“Since 1997, FHFH has paid for the processing of enough deer, elk and livestock donations to provide nearly 22 million servings of nutritious protein-rich meat to help feed needy children, families and individuals,” Wilson noted.

To assist programs like the FHFH, the NRA Hunters' Leadership Forum (HLF) made $50,000 in grants available in July 2021, in amounts up to $1,500 each to any Hunters for the Hungry groups around the United States. 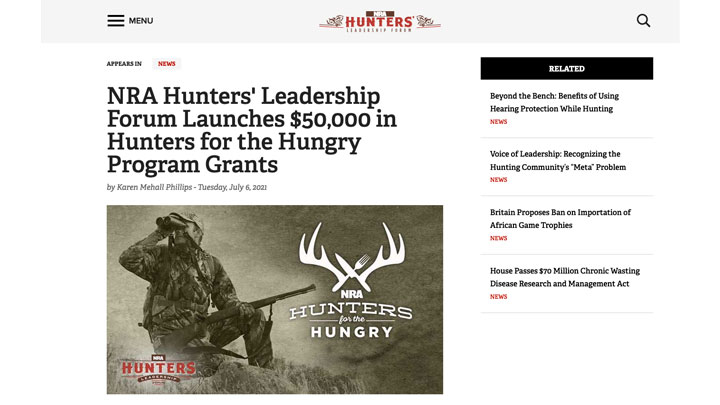 “We received an overwhelming great response to the press release and within a month we had fulfilled the $50,000 to 41 different groups, including the Maryland FHFH,” said HLF Director Peter Churchbourne. "I want to thank the generous donors who made it possible for HLF to support this incredibly worthy cause. America and American hunters have a long tradition of embracing the vast resources hunting provides as a means for feeding family and friends. We are honored to play a role in that noble process."

According to Wilson, the FHFH relies upon donations from individuals, churches, businesses, other organizations and foundations to provide the funds needed to pay local participating butchers to process donated deer and elk into meat for distribution to food banks and feeding ministries. The subsidy funding received by FHFH from the NRA Hunters for the Hungry fund will be used to help increase the number of meat servings processed for the food banks and ministries in various local communities across the nation.

The need is real. As Wilson explained, nearly 13 million children in the United States face hunger regularly and getting the energy and nutrition they need to learn and grow can be a day-in, day-out challenge. Approximately 25 percent of children in households are at risk of hunger, he added, and may be forced to rely exclusively on hunger relief organizations to make ends meet.

And it’s not only children who suffer from a potential lack of food. According to the non-profit group Feeding America, one in eight 8 Americans—approximately 38 million people—face hunger on a regular basis. In 2019, that included some 5.2 million senior citizens.

“That’s one in 14 seniors or 7.1 percent of all seniors. 63 percent of seniors visiting food banks say they have to choose between food and medical care,” Wilson explained. “Hunger takes a severe toll on seniors’ health and nutrition, putting them at risk for chronic health conditions like depression, asthma and diabetes.”

As far as the future for FHFH and the FHFH chapters around the nation, Wilson said the plan is to continue to support existing volunteer coordinators by developing new resources and opportunities for networking and, of course, to continue to raise the funds needed to pay for the processing of donated deer and other game. This will include a growing emphasis on digital outreach.

“We are also revising the process for new volunteers to apply and become part of the team with us,” Wilson said. “This will also include a more streamlined online application process to replace the need for paperwork that is printed and scanned or mailed back to us for review.”

He added, “Finally we recognize the need for a greater degree of communication and even collaboration between the various Hunters for the Hungry programs and organizations across the country. FHFH would like to play a role in facilitating this and, to a degree, representing the movement nationally for the benefit of the various independent organizations.”

Would you like to donate game meat to help the hungry in your community? Visit the FHFH website to find a chapter near you.