“Colorado: the Predator State.” That’s what the Centennial State will be if animal rights extremists ever get their way. Set for a hearing tomorrow by the Agriculture and Natural Resources Committee, Colorado State Senate Bill SB22-031 seeks to ban the hunting of mountain lion, bobcat and lynx, though lynx have not been hunted for decades. As Fox News reported, “Bill SB22-031 specifically prohibits “shooting, wounding, killing or trapping a bobcat, Canada lynx or mountain lion”—unless the predator poses serious harm to humans or livestock on the person’s own property. (To read the bill, click here.)

Introduced on Jan. 12, SB22-031 was initially sponsored by state senators Sonya Jaquez Lewis and Joann Ginal, along with representatives Judy Amabile and Monica Duran. It’s no surprise that the sponsors all represent urban districts on the state’s front range—the districts where residents may never see one of these cats. It’s important to note a pattern here. You may recall that when Colorado residents voted to introduce wolves through a November 2020 ballot initiative, only nine of the state’s 64 counties voted for it—the counties surrounding Boulder and Denver. It’s easy to sidestep the facts about legal, regulated hunting when you aren’t the one living amongst predators.

Opposed by Colorado Parks and Wildlife, state wildlife biologists and hunter-backed groups like the NRA, the bill fortunately does not have widespread support according to the NRA Institute for Legislative Action (NRA-ILA). But hunters and wildlife biologists must not let down their guard as animal rights extremists push emotion over biological and scientific facts. The problem escalates as those against hunting try to turn the non-hunting public against it. We hunters and state game agencies work diligently to manage the nation’s wildlife, but such a bill would undercut efforts in one fell swoop.

"This bill has no basis in science, does not recognize the great contribution of hunters to wildlife conservation and cherry-picks certain species based on opinion instead of biological necessity," said Erica Tergeson, Senior Advisor, NRA-ILA. “NRA will fight this and other hunting bans across the nation.”

If passed, anyone who violates the bill would be guilty of a misdemeanor, punishable by a fine of $500 to $2,000 or up to one year in jail, an assessment of 20 hunting license suspension points, and civil restitution of $700 for a mountain lion or bobcat and $1,000 for a Canada lynx. Upon conviction, the person’s hunting license may be suspended for up to five years.

For these extremists who have no concept of regulated wildlife management, by the way, someone should tell them Canada lynx haven’t been hunted for decades after disappearing from Colorado in the 1970s. Backed by hunters, Colorado Parks and Wildlife (CPW) reintroduced the cats in 1999 and now they roam most of the state. Not only does this bill ignore that lynx aren’t hunted, it hides how the CPW and wildlife agencies in every state work to manage America’s ungulate and predator populations.

CPW currently conducts a tightly managed mountain lion season and permits bobcat hunting from December through the end of February with no bag limits, which indicates there are ample cat populations statewide. Because Canada lynx are currently protected as threatened under the Endangered Species Act, some wonder if the bill’s provision to ban hunting the species might be a preemptive strike in case the cats are delisted in the future.

Of course, in addition to the sponsoring legislators, the bill has support from animal rights extremist groups including the Humane Society of the United States, the Animal Welfare Institute, the Center for Biological Diversity, the Mountain Lion Foundation, Project Coyote, Sierra Club Colorado, WildEarth Guardians and Boulder Bear Coalition. If those supporting this bill get their way, Colorado can kiss its viewable and huntable ungulates goodbye. The strict quotas on mountain lions in Colorado already have caused a major impact on the mule deer population in many areas. Black bears heavily prey on fawns and calves in the spring, and this is even before you discuss the issue of introducing wolves to the mix. All things considered, this mountain lion, bobcat and lynx bill, if passed, would be devastating to Colorado’s big-game populations.

But the issue gets compounded when you talk economics. I’m not sure what those against legal regulated hunting think the state is going to do to replace the revenue brought in by hunters and hunting license sales. According to the Colorado Wildlife Council (CWC)— created by the state legislature in 1998 to inform the public of the benefits of wildlife management and wildlife-related recreational opportunities throughout the state—Colorado hunters and anglers contribute more than $3.35 billion to the state annually. Extremists, of course, ignore the benefits and necessities of regulated wildlife management. Wildlife thrives specifically because their populations are managed as hunters help to maintain carrying capacity and prevent overpopulation for health and sustainability.

You also may recall the CWC for its well-received “Hug a Hunter” and “Hug an Angler” TV ad campaign from a few years ago. It ran a series of 30-second ads geared to those with no knowledge of hunting and fishing. As this site reported when the campaign launched in 2016, the ads conveyed a simple message: Hunting and fishing are beneficial to all outdoor users and to the state’s economy. 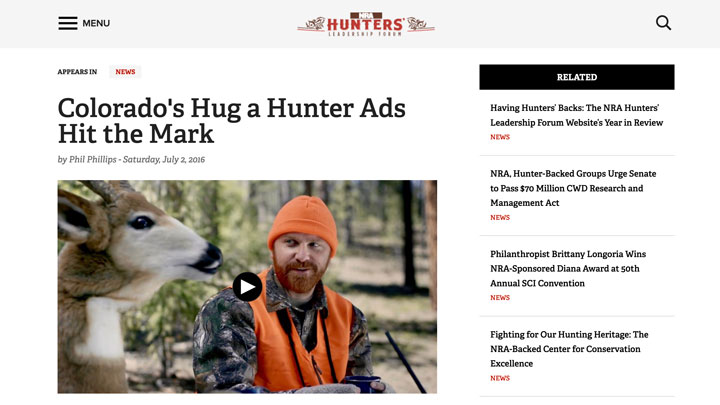 As a lifelong Colorado resident, I’ve witnessed a lot of crazy things when it comes to predator hunting in the state. In 1992, extremists put our spring bear hunting season and baiting on the ballot, which let a bunch of people who had never seen a black bear vote on managing the species that the state’s professional wildlife biologists should be in charge of managing. Anti-hunting extremists led by groups like the Humane Society of the United States launched a campaign packed with lies and emotional pleas and got the issue on the ballot so the public could vote to end it. They claimed that lactating sows were being killed during the spring hunting season and their cubs were starving to death. However, only one lactating sow accidentally was killed by a hunter the previous spring as CPW explained far more lactating sows were killed on the highway that year. Though state wildlife biologists provided science-based evidence showing that hunting was a common-sense bear-management tool, the ballot measure passed. Wildlife-management authority was seized from state biologists. So, while hunting is a common-sense wildlife management tool, it cannot help to keep wildlife populations in check if it is banned. So instead of having hunters help to manage black bear populations during a spring bear hunting season, Colorado pays government trappers and its own CPW staff to kill problem bears. The irony: Bears are still killed—just not by hunters—and the state pays the bill.

As with the upcoming wolf introduction that was passed by those who live in places where they may never see a wolf, SB22-031, if passed, could put the last nail in the coffin of Colorado big-game animals. The bill has shades of Oregon’s IP-13, which, covered by this NRA Hunters’ Leadership Forum (HLF) website in July 2021, aims to criminalize hunting, fishing and animal husbandry. “If it makes it onto the November 2022 ballot and passes,” the NRA HLF reported, “Initiative Petition (IP) 13—known as the “Abuse, Neglect and Assault Exemption Modification and Improvement Act to amend Chapter 167 of the Oregon Revised Statutes—would ban and criminalize all hunting, fishing, trapping and regulated animal husbandry and farming practices under the state’s animal cruelty laws. The lone exception: self-defense against an animal presenting an “apparent threat of immediate violence.” In supporting hunters—and common sense—NRA-ILA came out against that citizen’s petition too. 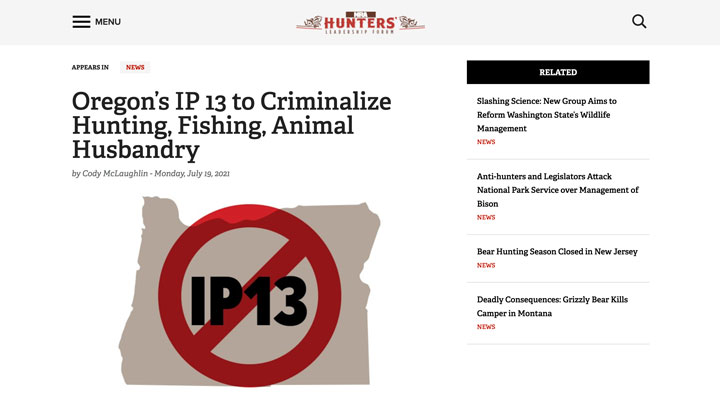 Wildlife biologists and others who grasp the role of science-based wildlife management over human emotion say Colorado’s SB22-031 would make protecting livestock too difficult. Banning the hunting of these cats would mean their populations would only expand, leading to more attacks on humans, wildlife and livestock. Maybe this is the reason a few of the bill’s sponsors dropped their support ahead of tomorrow’s hearing. As Fox News shared, “Sen. Ginal said that the bill did not have the proper support from wildlife management scientists and other people on the ground.” It’s not too tough to figure out why.

About the Author
Outdoor writer, TV host and farm/ranch real estate associate broker Phil Phillips has hunted five continents, taking nearly 60 species worldwide. Prior to hosting hunting programs, he started Colorado's first Ranching for Wildlife Program for antelope. Working alongside professional land managers, he went on to guide clients to 500-plus big-game animals and was named Safari Club International’s (SCI) North American Bowhunting Outfitter of the Year. A Life member of hunter-backed organizations including the NRA, Dallas Safari Club, Mule Deer Foundation and Safari Club International, he can be reached at [email protected].