We Hunt, We Give: Houston Safari Club Foundation Hunt Expo Tells the Truth about Hunting

When I attend a hunters’ convention, the first thing I do is pick up a convention directory as I did over the weekend at the 50th annual Houston Safari Club Foundation (HSCF) Worldwide Hunting Expo and Convention, Feb. 4-6. Across the bottom of the cover were the words “WeHuntWeGive.org/Convention”–a fitting URL for a hunting organization. Why? Because we hunters hunt … and we give. Like the HSCF, every like-minded hunter-backed group from the NRA Foundation and Dallas Safari Club Foundation to the Safari Club International Foundation, Mule Deer Foundation and Rocky Mountain Elk Foundation does the same as their membership ranks are filled with hunters driven to protect America’s hunting and conservation heritage and our renewable wildlife resources.

While the HSCF’s 58-page convention booklet listed the typical schedule of events and the exhibitors and fundraising auction items, those who do not hunt may be interested to know it also was packed with articles on HSCF—and hunter-backed initiatives that are aiding wildlife and its habitat. A non-hunter who opened the directory also would get an education as to where hunters’ dollars go and how groups like the HSCF raise money specifically to give it away in the form of grants to hunter-funded projects to promote conservation and public education.

Of particular interest to me was the article “The Great American Wildlife Conflict.” In tracking the issues facing the future of hunting and wildlife conservation in today’s world, including the need to balance wildlife’s needs with the needs of an expanding human population, it also pointed to how animal rights extremists’ efforts to drive wildlife policy only make matters worse.

“I love wildlife,” author Chester Moore wrote. “I dedicate a huge amount of my time to its conservation, but it has to be managed.” In an era of animal rights extremism, he also shared the importance of educating the non-hunting public about hunting—a regular topic for this NRA Hunters’ Leadership Forum (HLF) website. Noting the increase in the number of new gun owners and hunters since the pandemic, Moore concluded, “With so many new potential allies, perhaps we can make the next 20 years a period of growth for those truly on the side of wildlife.”

We can do this because, as NRA HLF-funded research shows, hunting is consistent with the values and beliefs of most Americans. But today the facts no longer speak for themselves. Instead, we hunters witness how animal rights extremists’ efforts to end legal, regulated hunting not only get in the way of law-abiding Americans’ ability to enjoy a legal pastime, but they interfere with state wildlife agencies’ wildlife management efforts. Hunting will endure for future generations only if we hunters succeed in effectively and persuasively telling non-hunters our story. While it is the foundation of America’s world-renown wildlife conservation success story—the North American Model of Wildlife Conservation (NAMWC)—hunting’s future hinges on increasing its cultural acceptance.

To aid the hunting community in doing this, in 2016, the NRA hired Mark Damian Duda, head of the international public-opinion-and-attitude survey research firm Responsive Management, to begin researching public attitudes toward hunters, hunting, animal rights and animal welfare. The result was the NRA HLF book “How to Talk about Hunting: Research-Based Communications Strategies.” Delivering a blueprint for communicating and debating about hunting, it teaches us to be tactical, practical thinkers and communicators. It outlines the messages that the NRA research shows resonate with non-hunters, making them most receptive to what we say on the logical and emotional level. Just as important, it teaches us to consider the impact of the words we choose so the American public is more likely to be an ally of hunting—or at least not be against it. 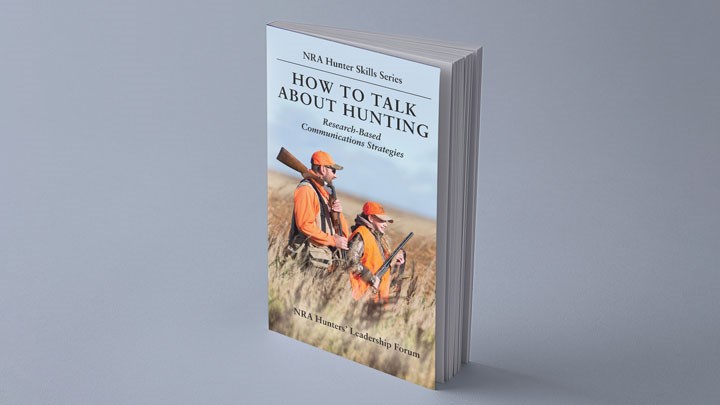 Released in late 2020, the book was initially reserved for wildlife conservation and hunting professionals at the U.S. Fish and Wildlife Service, state wildlife agencies and hunter-backed conservation organizations. Packed with talking points and key takeaways, it shares why communicating about hunting is important; what works and does not work when discussing hunting; and how to implement communications strategies, including persuasive debate tactics. It tracks how support and opposition to hunting changes based on species, motivation and methods and concludes by outlining specific dos and don’ts when talking with those who have little or no knowledge of hunting. It illustrates how the case for hunting resonates when we explain that hunters and non-hunters alike share common values and motivations when it comes to our concern for wildlife and that hunting is compatible with the animal welfare mindset. While emphasizing hunting as a food source and a right, it also tells us to share that the revenue hunters generate benefits both wildlife species and habitat. Just as important, it teaches us to consider the impact of the words we choose so the American public is more likely to be an ally of hunting—or at least not be against it.

Circling back to the HSCF, its URL “WeHuntWeGive.org” is we what hunter-conservationists have been about for 100 years. Thank you, HSCF, for showcasing that message as you mark your 50th anniversary. It was hunter-conservationist, NRA member, Boone and Crockett Club founder and U.S. President Theodore Roosevelt who first used his office to protect and conserve America’s wildlife resources for future generations. By the way, his chief advisor was fellow hunter Gifford Pinchot, who is credited with coming up with the term conservationist. Roosevelt went on to federally protect 230 million acres during his presidency, securing more federal land from development than all prior presidents combined.

I’m proud to be affiliated with the HSCF and with multiple other hunter-backed groups all focused on protecting hunting and wildlife conservation. As for how we spell conservationist, maybe it should be “H-U-N-T-E-R.”