How to Talk about Hunting

Legal, regulated hunting in the 21st century faces cultural, political, demographic and social challenges that previous generations of hunters never could have imagined. While it is the foundation of America’s world-renown wildlife conservation success story—the North American Model of Wildlife Conservation—today its future hinges on increasing cultural acceptance. Public opinion can be volatile, and hunting will endure only if we hunters succeed in effectively and persuasively telling non-hunters our story.

But explaining hunting’s benefits and why we hunt is easier said than done. Speaking from experience as a hunter and someone who has dedicated her career to working for the NRA for decades to promote and defend hunting, there has never been a tool in the hunter’s toolbox to help hunters do this—until now. Thanks to the NRA’s ongoing investment in hunting’s future, the new NRA Hunters’ Leadership Forum (HLF) book, “How to Talk about Hunting: Research-Based Communications Strategies,” delivers a blueprint for communicating and debating about hunting deliberately and thoughtfully, teaching us to be tactical, practical thinkers and communicators. It outlines the messages that the NRA HLF-funded research shows resonate with non-hunters, making them most receptive to what we say on the logical and emotional level. Just as important, it teaches us to consider the impact of the words we choose so the American public is more likely to be an ally of hunting—or at least not be against it.

Written for hunters and hunting and wildlife conservation professionals, “How to Talk about Hunting” is the result of a four-year NRA HLF-funded research project. In 2016, after launching this award-winning, hunting-issues-based website, NRAHLF.org, the NRA hired Mark Damian Duda, executive director of the international public-opinion-and-attitude survey research firm Responsive Management specializing in outdoor recreation issues, to begin researching and assessing public attitudes toward hunters, hunting, animal rights, animal welfare and dominionism. The book was written by Duda and produced by the HLF in December 2020 with the first printing of 3,500 copies reserved for wildlife conservation and hunting professionals at the U.S. Fish and Wildlife Service, state wildlife agencies and hunter-backed conservation organizations.

In showcasing the NRA data, which affirms overwhelming public support of legal, regulated hunting, the book’s 11 chapters are packed with talking points and key takeaways. Topics include why communicating about hunting is important; what works and does not work when discussing hunting; and how to implement formal and informal communications strategies, including persuasive debate tactics. It tracks how support and opposition to hunting changes based on species, motivation and methods and concludes by outlining specific dos and don’ts when talking with those who have little or no knowledge of hunting. It illustrates how the case for hunting resonates when we explain that hunters and non-hunters alike share common values and motivations when it comes to our concern for wildlife and that hunting is compatible with the animal welfare mindset. While emphasizing hunting as a food source and a right, it also explains how we must share that the revenue generated by legal, regulated hunting that benefits both wildlife species and habitat.

For just one example pointing to the need for hunters to become engaged with non-hunters, the research shows that 46% of Americans erroneously believe legal, regulated hunting causes species to become endangered. In fact, we know the opposite is true. From the whitetail deer and elk to the wood duck, species have been brought back from the brink of extinction and now thrive due to the funding generated by legal, regulated hunting. Clearly, what we think may be common knowledge is not a given so we must specifically talk about this.

While “How to Talk about Hunting” is not yet available to the public, 4,000 more copies are on the way. In the meantime, the NRA HLF and Responsive Management, in conjunction with the Council to Advance Hunting and the Shooting Sports (CAHSS), are conducting free “How to Talk about Hunting” webinars for outdoor media and hunting community professionals focusing on what the research teaches us regarding best practices in advocacy. 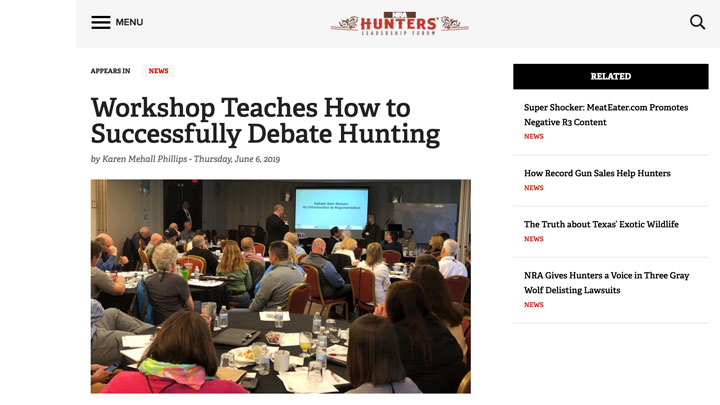 Prior to the book launch, the NRA HLF and Responsive Management also conducted debate workshops for hunting and wildlife professionals, working with groups such as the Rocky Mountain Elk Foundation. The workshops provided insight on how to put hunting’s best foot forward when debating with those who seek to end hunting—efforts that are amplified by the effects of social media—while reaching those who have never been exposed to our way of life. While we hunters have wildlife science on our side, too often we cannot score points in a debate on the merits of legal, regulated hunting, its value as the world’s No. 1 wildlife management tool or the fact that more than 11 million Americans hunt safely and legally each year. The reason is because we do not have the strategic thinking and communications skills to win it. But thanks to the NRA HLF-funded research and book, the tide is turning.

Every Hunter’s Call to Action
Despite the valuable information provided in the “How to Talk about Hunting” book, webinars and workshops, research alone is not enough to build cultural support for hunting. If we hunters do not implement the book’s researched-based communications strategies, those in the middle will remain vulnerable to the misconceptions about hunting spouted by the other side.

Fortunately, doing our part is as simple as organizing our talking points and understanding what to say and how to say it. This also means recognizing that it is not what we say that registers but what non-hunters hear or understand. The book has done the work for us. If we are as passionate about increasing cultural support for hunting as we are about going hunting, then legal, regulated hunting will remain safe on our watch and into the future.

About the NRA Hunters’ Leadership Forum (HLF)
As the nation’s oldest civil rights organization, the National Rifle Association fights for American freedom and its 5.5 million members, gun owners, hunters and shooters. In response to the culture war on American hunters, in 2014 it established the NRA Hunters’ Leadership Forum (HLF) to address the cultural, political, demographic and technological challenges to hunting’s future. In 2016 it launched the NRAHLF.org website to track the news and issues impacting the future of hunters, hunting and wildlife conservation. The NRA HLF marches in step with one of the NRA’s five key purposes and objectives: “to promote hunter safety, and to promote and defend hunting as a shooting sport and as a viable and necessary method of fostering the propagation, growth, conservation and wise use of our renewable wildlife resources.”

About Mark Damian Duda and Responsive Management
Wildlife biologist Mark Damian Duda is the founder and executive director of Responsive Management, which over the past three decades has conducted more than 1,000 studies for every state fish and wildlife agency, most federal resource agencies and numerous non-profit organizations. His research has been featured in peer-reviewed journals and presented at natural resource and outdoor recreation conferences worldwide. In 2016 the NRA Hunters’ Leadership Forum named Duda the recipient of its NRA Distinguished Hunters Leadership Award, adding to his noted list of accomplishments.