Are You Afraid of “Bambi?”

Human intellect may well be the desired mechanism for developing ideals and values in our societies, but the truth is, deep-seated human emotion always has a hand on the rudder. Humans are an emotional animal, and those who forget this essential truth will be frustrated and surprised when events unfold that seem so at odds with what they perceive as a logical view of the world and yet present a false reality that somehow gains wide acceptance publicly.

A remarkable case in point is the animated film “Bambi,” produced in America by Walt Disney in 1942 and based upon a children's book written by Austrian novelist and theater critic Felix Salten in 1923. While Salten’s book painted a considerably different and more realistic view of the natural world, Walt Disney’s effort created a very unreal spectacle of humanized animals that, however beguiling and entertaining, carried into the public consciousness moral tales with a highly distorted view. Who would have predicted that a cartoon following the life and times of a small whitetail deer would have from its launch and up until today served such pervasive influence upon American attitudes toward wildlife and man’s role in the environment? Indeed, 80 years later it is difficult to name any story having greater lasting penetration of the American mind in this regard.

For hunters, the film has long been seen as emblematic of, and perhaps as the instigator of, anti-hunting sentiment. While the latter is not true (opposition to hunting long predates this film), there is no doubt that “Bambi” launched an alternative worldview upon the American (and eventually the global) consciousness where animals share virtually every human capacity and virtue but no human vice, and where man is a foreboding presence and a villain seeking an end to the ideals of peaceful coexistence.

The film, in my view, is a masterpiece of deception. The number of complex messages subtly delivered throughout the work is extraordinary and the attitudes toward man’s place in the environment represent an incredibly early forecast of what would eventually arise to fullness with the environmental movement of the 1960s and 1970s. Perhaps that was how long it took for the first generation of children who saw the film to mature to young adults and engage in the environmental protest movement. While the environmental movement has done much that is positive in drawing attention to challenges facing the natural world, its more extreme elements have taken a decidedly anti-human perspective.

So, should we as hunters and conservationists be afraid of “Bambi?” There can be no doubt that the film portrays hunting in a negative light. Who cannot recall the dramatic moments of the film when Bambi and his mother find the first new grass of spring but then the hunter’s shot rings out and Bambi’s father explains ominously that Bambi’s mother “can't be with you anymore.” After all, most of the film is spent constructing Bambi as a vulnerable child and then suddenly the viewer sees the mother-child relationship broken, a traumatic human experience on many levels, one that in this instance is executed by a hunter.

The film, as best I can recall, never explicitly condemns hunting. Rather the anti-hunting message is effectively delivered at an emotional level, tying into the deep associations all human beings harbor for children and mothers. Thus, the film may have been intended for an audience of children, but its message impacts adults very strongly as well. It is a brilliant example of how to use indirect messaging to devastating effect.

But the film’s message goes far beyond a condemnation of hunting in that it forcefully portrays humans generally as the problem for wildlife and nature itself. This is where it wades into a much broader anti-sustainable use, anti-conservation ethic. Consider another dramatic point in the film where the soundtrack turns heavy and foreboding and creatures suddenly scatter in fear and confusion and Bambi’s mother announces that man was in the forest. At this point, it is clear that the very presence of man, hunting or otherwise, is destructive to nature, to beauty, serenity and peaceful existence.

Here is where the film extends its reach to the world of ideology—an ideology that appears repeatedly in the rhetoric and commitments of more extreme elements in the preservationist and animal-rights components of the environmental movement even today. It is, in my view, a rhetoric of despair, leading in its extreme form to the conclusion that the only way to safeguard the natural world is to construct a world without humans.

The problem with “Bambi,” then, lies in its complexity as well as the powerful impact it has upon human emotions. How exactly are we to interpret it, and how, if we disagree with its message, do we counter it? One thing is for certain: We cannot afford to ignore the message of this film, since it has reverberated around the world. 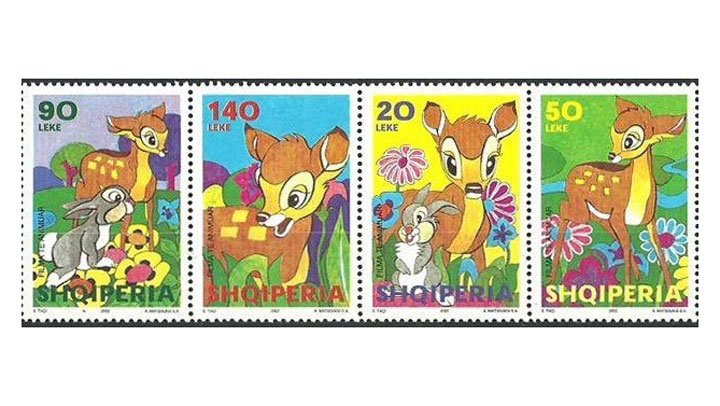 If all we can consider of man is that he represents everything that is wrong with nature, then it will be a difficult thing indeed to recommend humanity as the instrument of rescue for the natural world. In fact, this outlook is one of inevitable ecological disaster if man is in the picture. Given such a perspective, it is a hundred times more difficult to recommend the use of wild resources, via such means as hunting, as a wildlife conservation mechanism.

Taken to this level, we may logically extend the film’s influence to the rise of a worldview that wishes to place humanity—just as the film does—in the position of voyeur rather than as a natural participant in nature’s ultimate story, that of life and death. The film represents nature as an earthly Eden where intruding humans deface the perfection, a biblical reference that (again) resonates strongly with the human consciousness.

The film personifies animals and identifies them as victims—even exaggerating their physical features, increasing the size of their heads and eyes, so as to resemble the proportions of human infants. Innocent, with luminous eyes and long lashes, the “Bambi” parade of characters are forerunners of the harp seal “white coats” that have nurtured anti-hunting debates around the world. 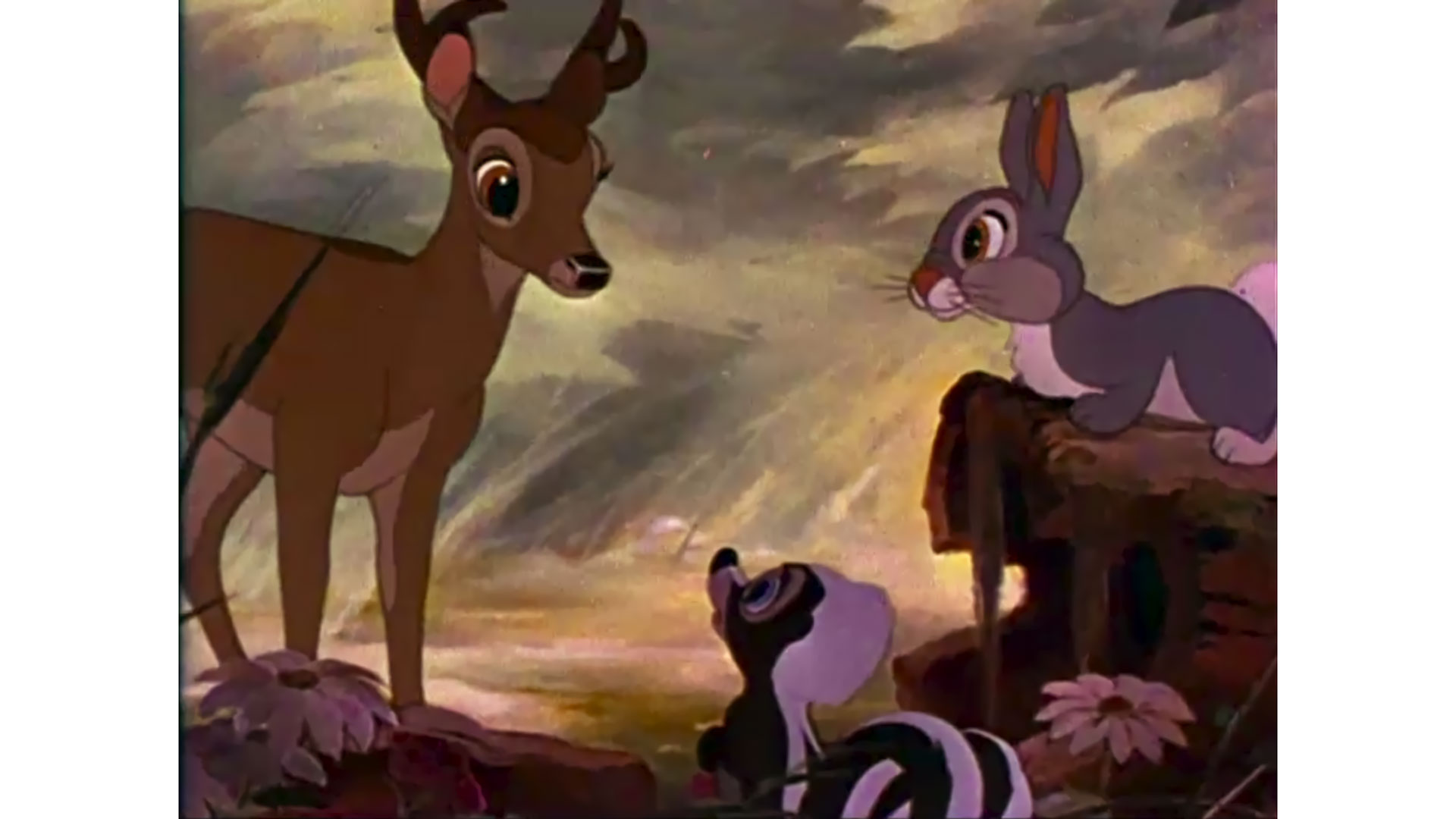 Walt Disney’s production may be all soft and cuddly, but the subliminal effect of representing deer, skunks and rabbits as surrogate children is an iron-fisted delivery of a grossly distorted image of nature—a nature that has never existed. It’s a nature where predation is absent, all animals are friends, and man ravages with his firearms, his dogs and his fire. Man is the one unnatural element of nature rather than an outcome and citizen of it.

I see no hope in this image for a sustainable world, no hope for the billions of human beings who share this planet with us and rely on its natural resources, no hope for human intellect and passion to combine in forging a better civilization and restoring nature, conserving nature or safeguarding our traditional engagements with wildlife.

This is what the worldview of “Bambi” tells us: Let us separate all humans from all animals so that animals may live in peace, like the lion and the zebra, like the great white shark and the sea lion—and let the human child starve while wishing for the peaceful coexistence of the world of “Bambi.” So, are you afraid of Bambi now? You should be.

About the Author
Shane Patrick Mahoney, president of Conservation Visions and Founder of the Wild Harvest Initiative, is an internationally recognized conservationist and wildlife advocate and is considered a foremost expert on the North American Model of Wildlife Conservation. Former executive director of Sustainable Development and Strategic Science for the Province of Newfoundland and Labrador, Mahoney serves as deputy-chair of the International Union for Conservation of Nature’s (IUCN) Sustainable Use and Livelihoods Specialist Group (SULi) and as an IUCN representative to the Collaborative Partnership on Sustainable Wildlife Management (CPW). He also serves as president of the Policy and Law Division for the International Council for Game and Wildlife Conservation (CIC) and is a fellow of the Wildlife Society (TWS).