For most of human existence, hunting was an integral component of our species' ecology, an act of pure survival and a primary means by which our communities were sustained. A successful hunt meant sustenance and security, brief but vital achievements within a tenuous existence. Understandably, both were celebrated by the hunter and the non-hunter alike.

By means of storytelling and mythology, both groups participated in the hunt. Certainly, neither understood hunting in terms of recreation or sport, its beleaguered, modern terminologies. Hunting was a necessity, and the hunter was deemed the provider. And, it was the perceived generosity of the hunter, even more than his skill, that elevated him to a position of respect. Sharing his success was what mattered most to the hunter's status and to his community's survival. Through this mutual benefit, a core value system arose in human society, one where success and sharing became intertwined.

Today, we may often feel that this past is but an imagined whisper, a reality long dispersed and leaving us with an entirely new human world that little reflects its ancestral roots. Indeed, if you look at the declining rates of hunting participation and listen to the mounting objections of anti-hunting groups, you might conclude that hunting itself has become unacceptable and largely irrelevant in our modern world.

Scratching the surface, however, you will find this diagnosis premature. Although it is true that only about 4 percent of the population in the United States engages in hunting activities, roughly 80 percent of Americans approve of hunting. Few activities—and far fewer controversial ones, which hunting surely is—enjoy anything close to this level of support. How and why is this support maintained? What can explain it? Could it simply be that the non-hunting population inherently agrees with hunting, no questions asked? Or is there at play some more profound human dimension that can help explain all of this? I have always felt there is, and that uncovering it likely will be a key to preserving hunting as we know it in North America.

While there is certainly a complex set of factors at work, I believe these numbers suggest that hunting is not an isolated activity that occurs outside the experience of the majority population. Somehow the non-participatory mass of people remains connected to hunting or are made to feel as though they are. Somehow still, remarkably, hunting remains resonant across the larger fabric of society. But how? ls it possible that non-hunters still can perceive they benefit from hunting in some way, just as they did in the past, and thus continue to acknowledge, in a more muted process of quiet support rather than celebration, successful hunts and successful hunters? Does the broad public, in fact, still regard hunters as providers, in some atavistic way? Is this the wellspring from which the 80 percent public-support rating derives? If so, what possibly could be reinforcing this societal tendency that seems so invincible to time, change and controversy?

Traditionally the most concrete manner in which hunters impacted the lives of other community members was through the shared consumption of wild meat. If this sharing tradition has been maintained, then this might be one way in which hunting could sustain both its presence and legitimacy in modern society. But while it is known that many non-hunters in the United States have tried game meat and that hunters regularly share their wild meat harvest with others, the extent and patterns of wild meat sharing in the country are largely unknown. Without this information, it is difficult to conclude what role meat-sharing might play in maintaining public support of hunting.

The Wild Harvest Initiative: Tracking the Consumption of Wild Harvested Meat
Obtaining this information lies at the heart of a comprehensive new program, the Wild Harvest Initiative, designed to explore the modern relevance and value of North America's hunting traditions. The initiative represents an expanding network of partners dedicated to evaluating the varied dimensions and social impact of wild harvesting activities in the United States and Canada. Uncovering, for the first time, the full economic, conservation and social benefits of recreational animal harvests, it is building an evidence-based narrative on the relevance of these activities in today's society. As a crucial part of this effort, it has set out to determine the full extent of wild meat sharing that takes place throughout the United States and Canada.

Starting with Texas as an initial point of inquiry, the Wild Harvest Initiative, in partnership with the Texas Parks and Wildlife Department, administered a Wild Meat Sharing Survey to resident hunters statewide. The survey findings, made available in 2020, are indeed remarkable. They shed new light on an ancient tradition that has been maintained long after it was essential for human survival. They open a modern passageway to our hunting past and expand our appreciation of hunting's present.

The survey revealed that nearly all successful hunters (98 percent) regularly share their wild-harvested meat, and that this meat is shared with an estimated 5.8 million people across Texas annually. Considering that, on average, less than 1.2 million people in Texas are hunting each year and, of this number, only around 718,000 are successful, the social reach these individuals have is astounding. Roughly speaking, successful hunters in Texas are expanding the number of people benefiting from their wild harvesting activities by eightfold. This statistic has profound implications, especially when considering that approximately one in seven people (four million people total) in the state are experiencing some level of food insecurity. 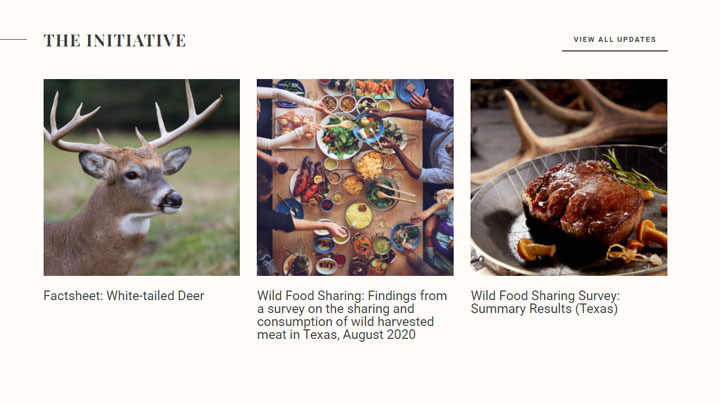 Significantly, individuals receiving the shared meat are definitely not restricted to those living within the same household as the hunters themselves. In fact, the majority of people receiving this meat—3.7 million (about 64 percent)—live outside the hunter’s home. And the amount of meat involved is substantial. The survey revealed that hunters share nearly 43 percent of their meat harvest with people living outside their domiciles, embracing a community of extended family, friends, neighbors and associates.

So, why do hunters do this? The Texas sharing survey also looked at the motivations behind meat sharing and hunting participation itself. More than half the respondents stated that spending time with family and friends was a primary motivation for hunting while the most common reasons for harvest sharing were that hunters had more than enough meat for their own household and wanted to help family and friends. Each of these responses speaks to an overall awareness and deep appreciation of family and community within the Texas hunting tradition.

While the results of this survey are specific to Texas, I suspect the story is similar in many other parts of the United States and Canada. And we will certainly find out. Building on the survey administered in Texas, the Wild Harvest Initiative has partnered with several other state wildlife agencies to gather findings from other parts of the country. Once compiled, these results will reveal a more complete picture regarding the motivations and expansive social benefits associated with hunting in the United States.

Grasping Hunting’s Relevance and Social Value in a Modern World
But already the data are telling a positive, compelling story about our society and its traditions—and one that is contrary to the overarching narrative we so often hear. We are constantly bombarded with stories of how community ties are eroding under the increasing weight of individualistic, self-absorbed pursuits and technology-mediated relationships. Generosity and magnanimity are certainly not the most often mentioned attributes used to describe today's society. However, those who harvest wild meat, and who share so much with others, provide a powerful counterpoint to that narrative. I suspect this will be proven true of all who harvest from the natural world, hunter and gatherer alike.

This culture of generosity, demonstrated so emphatically by present-day hunters, is rooted in our evolutionary history. For tens of thousands of years, communities have come together to share, celebrate and enjoy the wild sustenance provided through successful hunts. The Wild Harvest Initiative, through its Hunter Sharing Survey, is uncovering the modern dimensions of this historically rooted, cultural network that connects hunters and non-hunters in a community built on generosity and shared resources. The inherent beauty in these connections is worth preserving and speaks forcibly for the relevance and social value of North America's hunting tradition. After all, who does not admire those who share?

About the Author
Shane Patrick Mahoney, president of Conservation Visions and founder of the Wild Harvest Initiative, is an internationally recognized conservationist and wildlife advocate and is considered a foremost expert on the North American Model of Wildlife Conservation. Former executive director of Sustainable Development and Strategic Science for the province of Newfoundland and Labrador, Mahoney serves as deputy-chair of the International Union for Conservation of Nature’s (IUCN) Sustainable Use and Livelihoods Specialist Group (SULi) and as an IUCN representative to the Collaborative Partnership on Sustainable Wildlife Management (CPW). He also serves as president of the Policy and Law Division for the International Council for Game and Wildlife Conservation (CIC) and is a fellow of the Wildlife Society (TWS).