Explaining the differences between hunting and poaching is something most hunters have had to do. Asked by people honestly confused over the distinction between these two activities, we explain that not only that poaching is illegal and a serious crime, but it is unsustainable and depletes wildlife populations—the opposite of the legal, highly regulated and sustainable wild harvests derived through recreational hunting. While the media often plays loosely with these two terms, hopefully the majority of North Americans understand the differences between them. Yet, hunting, as we know, is a complex topic and the issues surrounding it are seldom straightforward. There are many world views, not just those of North Americans, and they all feed the media’s characterizations of what hunting really means—and what the public understands hunting means is what will determine hunting’s future.

So, step back and take a world view. Then just maybe on a global scale, the issues of hunting, poaching and wildlife sustainability are not so clear after all—for any of us. For example, what about unregulated hunting, which is not illegal in many countries but is unsustainable? Is it poaching? And what if that over-hunting stems from cultural traditions hundreds of thousands of years old and contributes heavily to the food security and livelihoods of entire communities? Is it defensible? Aren’t most hunters and North Americans in obvious support of hunting for food to sustain local communities and their well-being? Yet, what if hunting for sustenance by those communities was also endangering species and ecosystems? Are we still in support of them? In other words, where does bushmeat harvest fit into our personal views about hunting, poaching and conservation? Does where we stand on these issues depend on where we sit?

The term “bushmeat” is traditionally defined as “the meat of African wild animals as food” as African forests and savannas are commonly referred to as “bush.” It is now well established that hunting for food and livelihoods has negatively affected numerous wild animal species in tropical and sub-tropical areas of Oceania, South America, South and Southeast Asia and that over-hunting for wild meat in Sub-Saharan Africa is now a major growing threat to its biodiversity. The U.S. Fish and Wildlife Service has concluded that the most immediate threat to the future of Africa’s wildlife is, in fact, the consumption of and illegal trade in bushmeat, considered even more detrimental to wildlife conservation efforts than habitat loss. Bushmeat consumption targets a wide array of species, including some that are currently listed as endangered. Left unchecked, it will inevitably lead to their extirpation. Small, isolated populations of highly endangered animals are especially vulnerable. 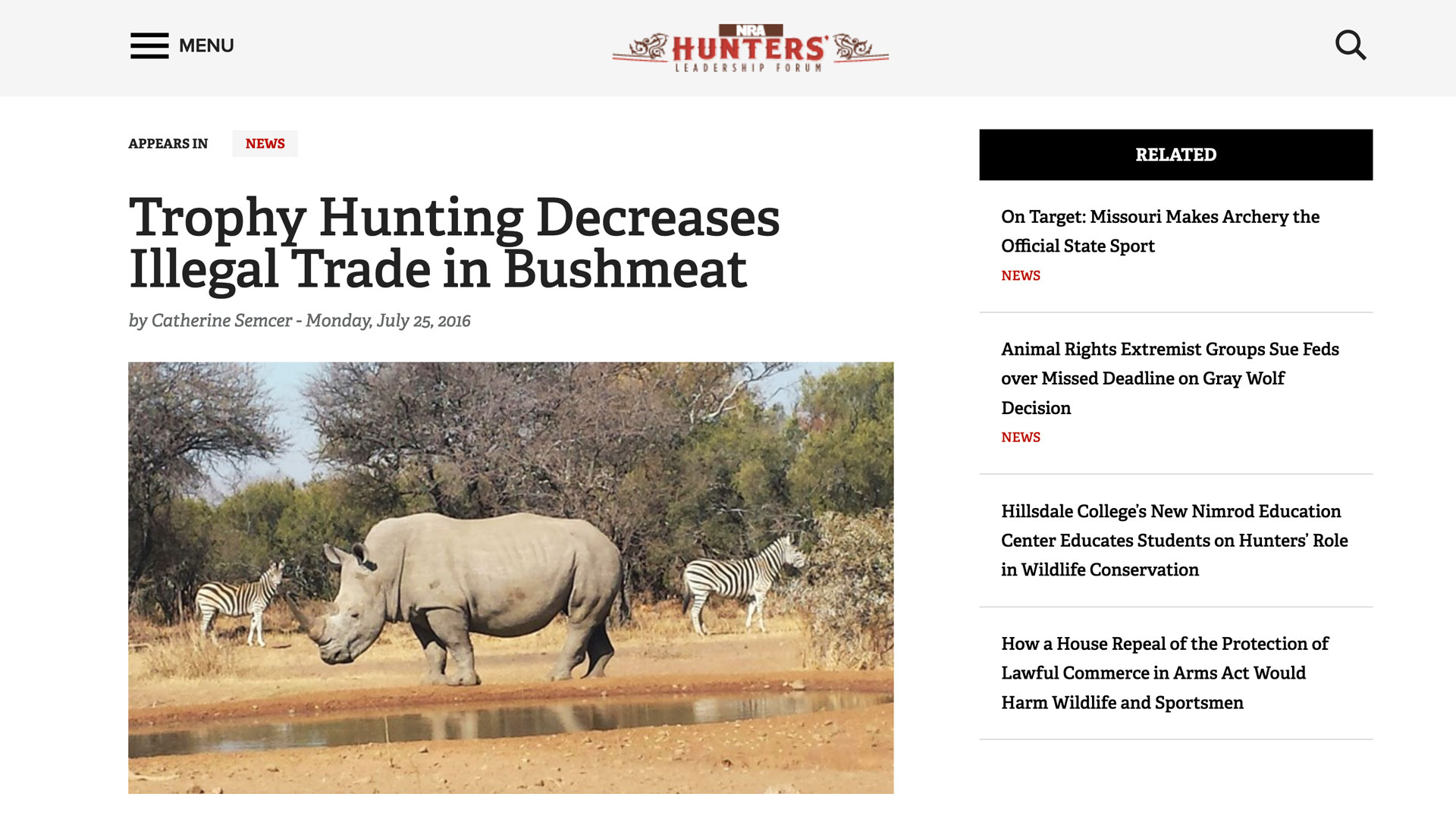 We must remember that such losses remove not just the animals from ecosystems, but their functions. Species function as prey for other species, seed dispersers and forest rebuilders. Thus, reductions in certain species can have far reaching impacts on others—domino effects that accelerate biodiversity loss and place ecosystems in crises of instability. It is now estimated that more than a quarter of all mammal species hunted for bushmeat are threatened with extinction. This is a massive conservation challenge and one all hunters should find concerning.

Hundreds of thousands of African animals are killed annually for bushmeat, usually by trapping and snaring. Recent reports estimate as much as 5 million tons of bushmeat are harvested annually across the Congo Basin alone for local consumption and sale in larger urban markets. 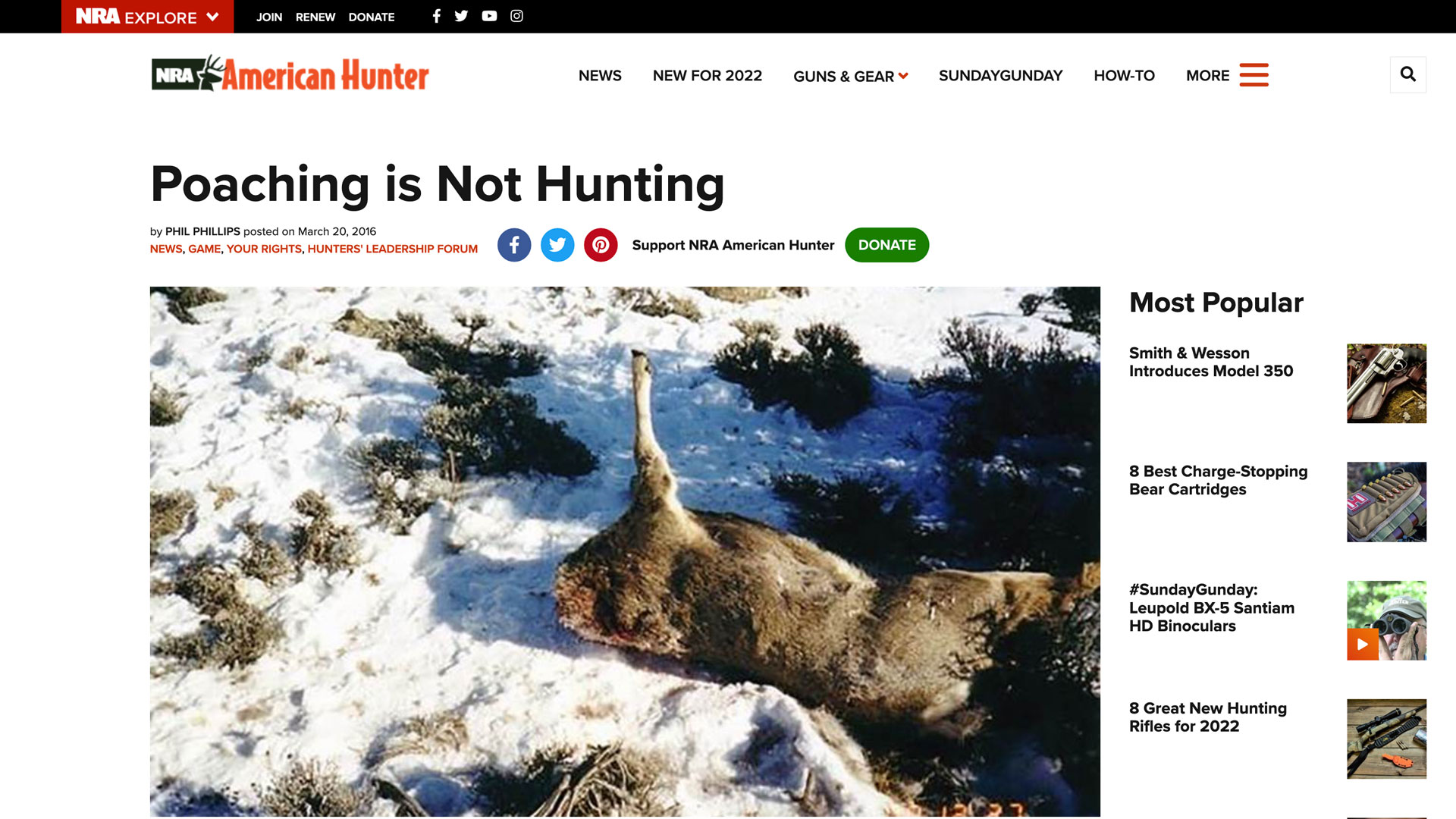 As North American wildlife advocates, our first reaction to this may be one of outrage followed by righteous indignation. Surely, we think, those people must stop what they are doing. Wildlife is being depleted and species are being endangered. We must do something. For the less informed, the issue can be even more confusing and colors the debate over poaching and legal, regulated hunting and undermines their willingness to consider hunting as a conservation practice. In fact, it encourages their view that all hunting is a conservation negative. Yet, we need to remember this harvest is all about food and livelihoods, and in many cases, it may not be in conflict with national conservation laws, though in some cases it clearly is. Regardless, these individual hunters need the wild food they harvest and the income they derive from its sale. No, their hunting may not be as sustainable or well-regulated as recreational hunting in North America, but it is far more urgent and essential. So, solving this problem and informing the many perceptions around it is not easy.

Complicating things is the fact that there are two types of bushmeat hunters in Africa. First, there is the hunter whose goal is to feed himself and his family. He typically resides in a rural area and has lived and worked in conditions most Westerners would describe as extreme poverty. As much as 85 percent of his family’s total protein is sourced from bushmeat and he may struggle to meet the family’s basic nutritional requirements. While he may trade meat for other foods or goods, his focus when hunting is subsistence, not profit. He hunts “for the pot,” so to speak, and his interactions with local wildlife closely resemble those of his ancestors. His choice of wild meats may not always coincide with the typical North American palate, but his primary motivations are universally understood. He does not have the luxury of choosing whether he would prefer a grocery store alternative. He hunts for food and eats to live.

Second is the commercial bushmeat hunter. Bushmeat has become big business, a luxury trade, and for those involved in supplying the meat, hunting is now a livelihood choice. While some of the animals killed may be used for subsistence, the primary motivation for this bushmeat hunter is income and profit: two motivations North Americas should understand. This hunter provides for himself and his family through organized, profitable, sometimes unregulated and sometimes clearly illegal trade. He is less likely to live in extreme poverty as the first hunter, though he is likely familiar with it. He kills large numbers of animals, often during migrations when millions of animals travel vast distances across Africa, at times leaving protected areas and straying onto community land where animals may be killed without fear of legal consequences. The commercial hunter cleans and stacks his kills, sometimes piling hundreds of carcasses to be transported across geographic and political boundaries while awaiting pick-up by his employer’s agent and his weekly paycheck.

The markets are not just African. Commercial bushmeat hunting forms the basis of a multi-billion-dollar international trade involving hundreds of species, from antelope to rodents, from elephants to bats. Once exploited because of low cost, customary tradition, weak law enforcement and/or lack of food alternatives, bushmeat now supports a sophisticated commercial trade run by international criminal syndicates. The dramatic increase in bushmeat value in recent years has been spurred by demand from growing urban populations throughout Africa, coupled with the increasing demand for bushmeat products by established cultural communities internationally. An estimated 7,500 tons of bushmeat enters the European Union each year. While North American numbers are harder to come by, we know it’s becoming more common to find bushmeat, especially from primates, at clandestine markets in urban centers across the United States and Canada. This commercial trade is often facilitated by logging ventures that create new roads and offer easy access to remote wildlife habitat, better transport routes and new pools of impoverished rural hunters from which to draw recruits.

It is not difficult to comprehend the motivations of either the first or second hunter. We may not agree with either of them. We may judge the second hunter more harshly, but neither circumstance is outside our comprehension. And it is easy to imagine how the first hunter for subsistence becomes the second hunter of commerce. Whether a person lives in Africa or North America, food and income are necessary to survival, and the ease with which they may be secured affects quality of life. One makes the most of what one has.

Having the international community effectively engage in this issue is not enough to demonstrate that bushmeat hunting, especially for commercial trade, is unsustainable and that it is depleting wildlife populations and iconic species. The fact is that bushmeat remains a necessity for many. International criticisms and directives to do better that do not offer viable solutions will never solve the bushmeat crisis. To find solutions, we must first understand not just the problem, but its roots.

Do we need enforcement of hunting quotas and better endangered species protections in Africa? Yes. Do we believe that cultural reliance on bushmeat may have to change to some degree? Yes. Should we create educational programs to alter public perceptions and educate the future consumer base for bushmeat? Of course. But above all, we must address the concerns of average citizens who, like you and I, worry about feeding their families and about finding and keeping a job that pays well but who, unlike us, live amidst Africa’s wildlife and the immediate challenges and opportunities it presents.

Relieving the bushmeat crisis will bring long-term benefits to wildlife and people and is a laudable goal for these reasons alone. It will also help remove one more factor contributing to the public confusion over hunting’s conservation value.

About the Author: Shane Patrick Mahoney, President of Conservation Visions and Founder of the Wild Harvest Initiative, is an internationally recognized conservationist and wildlife advocate and is considered a foremost expert on the North American Model of Wildlife Conservation. Former Executive Director of Sustainable Development and Strategic Science for the Province of Newfoundland and Labrador, Mahoney serves as Deputy-Chair of the International Union for Conservation of Nature's (IUCN) Sustainable Use and Livelihoods Specialist Group (SULi) and as an IUCN representative to the Collaborative Partnership on Sustainable Wildlife Management (CPW). He also serves as President of the Policy and Law Division for the International Council for Game and Wildlife Conservation (CIC) and is a Fellow of the Wildlife Society (TWS).