On Friday, Oct. 5, U.S. Secretary of the Interior Ryan Zinke awarded a combined $495,000 in grants to Utah and Arizona for state-identified priority big-game-migration-corridor research projects. The funding—$230,000 for Utah and $265,000 for Arizona—is the result of Secretarial Order 3362 (S.O. 3362), which he signed in February to improve collaboration between the federal government and the states to enhance their big-game winter-range and migration-corridor habitat. Secretary Zinke’s action demonstrates his strong commitment to working for wildlife after asking the states to submit their top priorities for advancing big game habitat conservation.

Utah’s Priority Projects
Receiving $230,000 in funding, Utah identified its top priority project as determining the impact of highways and increasing housing development on the mule deer population that migrates from the Oquirrh Mountains down into the Lake Mountains for the winter. This migration corridor carries the mule deer population across the state highway that connects the city of Eagle Mountain with the Salt Lake City and Provo areas.

This particular corridor is greatly impacted by the area’s rapid development where there are now neighborhoods that did not exist even 10 years ago. “This rapid expansion and development makes it all the more important that we fund important research projects like these to identify and better define migration corridors,” Secretary Zinke said. “These grants will allow the state to conduct research to understand how deer move and migrate within Utah. Once we can scientifically establish or better define the migration routes, it will allow us to work in partnership and use the best science and innovation to conserve the important corridors on which mule deer populations rely.”

Acting on the S.O. 3362, the Bureau of Land Management (BLM) is providing funding to the Utah Department of Wildlife Resources (DWR) to capture and place Global Positioning System (GPS) collars on 40 mule deer (20 does, 20 bucks) this winter (2018/2019). The DWR will use the tracking collars to accurately pinpoint summer and winter range use and migratory movements and corridors—information it will share with the Utah Department of Transportation.

Utah’s No. 2 and No. 3 priorities are focused on the deer herds in the Zion and the Chalk Creek/Kamas wildlife management units, important to state wildlife managers and hunters alike. The two units hold 15,000 and 20,000 mule deer, respectively. Using funding provided by the U.S. Fish and Wildlife Service, Utah DWR biologists will collar 80 mule deer in the Zion unit and 60 mule deer in the Chalk Creek/Kamas unit to document seasonal ranges and migration corridors in light of rapid housing and highway development and juniper encroachment.

As Utah Division of Wildlife Resources (DWR) Director Mike Fowlks explained, “Utah is one of the fastest growing states in the nation. With this rapid growth we need to be nimble and progressive in our management and restoration programs to provide habitat and migration corridors for big game. Secretarial Order 3362 has been an incredible shot in the arm by helping us address several urgent research needs for big game in Utah.” Information collected from these studies, he said, will be used to map migration corridors and plan projects, such as wildlife crossings, to preserve big-game movements. “I cannot stress enough how much the Secretarial Order can help Utah maintain abundant populations of deer, elk, and pronghorn,” he added.

Arizona’s Priority Projects
After identifying its top three research priorities in advancing big-game migration corridors and conservation, the state of Arizona is being awarded $265,000 through S.O. 3362.

“This partnership to identify movement corridors will help us intensify our efforts to conserve these important corridors in a state that is undergoing tremendous growth,” said Ty Gray, director of the Arizona Game and Fish Department. “Without this collaboration, these corridors might be lost.”

The Arizona Game and Fish Department (AZGFD) identified its top priority research projects as the gathering of data on mule deer movement corridors in the area planned for new interstate I-11. The grant money provided by the BLM through S.O. 3362 allows the AZGFD to work proactively with the state’s Department of Transportation during the planning process to prevent having to go back and retrofit actions once a highway is already constructed. Funding will cover the cost of collaring 60 mule deer, 20 in each of three identified study areas, to map their migration habits. The migration-route information will help developers to maximize the protection of the migration corridor during the design phase.

The two additional priority projects are associated with highways. First up is the SR77 Overpass between the Catalina Mountains and Tortolita Mountains. A highway overpass was built across SR77 in 2014, but a thorough evaluation of how mule deer move through the whole corridor and between mountain ranges has never been conducted. Grant funding will assist by paying to collar 20 mule deer to track their movements. The information acquired will influence future decisions on overpass construction and the conservation measures required for surrounding landscapes.

Arizona’s third priority research project involves getting a better understanding of migration corridors in relation to a high volume of annual road kills on SR89 east of the San Francisco Peaks and on movement corridors related to exurban development.

Recognizing Secretary Zinke as a Man of His Word
So as I and other website contributors have noted, American hunter-conservationists are fortunate to have this fellow avid sportsman running the show. My wife and I have witnessed this firsthand, most recently when we joined Secretary Zinke and members of the Mule Deer Foundation (MDF) in February to tag and collar mule deer in a Salt Lake City-area neighborhood that didn’t even exist a decade ago. Later that day, we joined the crowd gathered at the MDF booth at Salt Lake City’s annual Western, Hunting and Conservation Expo to applaud Secretary Zinke as he signed S.O. 3362 at the show. 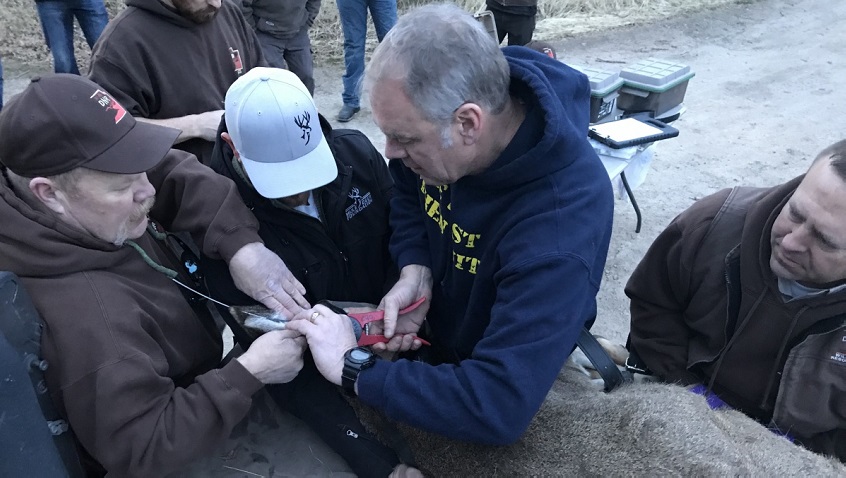 Secretary Ryan Zinke tags a mule deer in Utah. Secretary Zinke has backed up his commitment to state wildlife management by facilitating grants to Utah and Arizona to research big game migration and habitat. Photo courtesy of Tami Heilemann, U.S. Department of the Interior.

As NRA-ILA Executive Director Chris Cox stated in a Fox News article in September 2017, “The revitalization of America’s wildlife resources marks the greatest conservation success story in history, ensuring that America’s wild spaces, and the fish and wildlife species that rely on them, can be enjoyed by all. … Under Zinke's leadership, our precious wildlife resources will be effectively managed to protect them for current and future generations.”

As Secretary Zinke looks out for our natural wildlife resources, I think it is clear he will continue to support wildlife conservation and the future of hunting, which is great news for all hunters and outdoorsmen. Without hunters and hunting, there is no conservation.